While thoracic outlet syndrome is diagnosed and treated routinely in the US, we in the UK are lagging behind, physiotherapist Rob Patterson tells Louise Hunt. 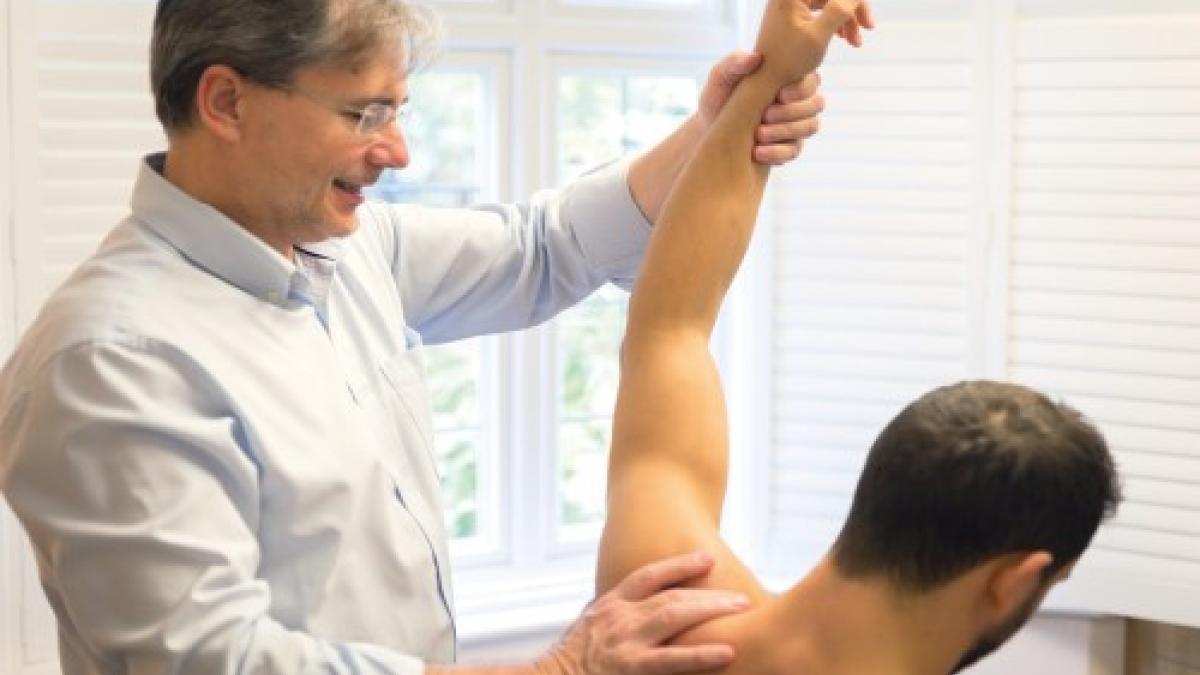 Thoracic outlet syndrome (TOS) is an uncommon, but not rare, nerve compression condition that appears to remain a mystery to most surgeons and physiotherapists in the UK. As a result, many patients are misdiagnosed or have unhelpful procedures. However, in other parts of the world, TOS is routinely diagnosed and treated.
These are the views of pioneering advanced physiotherapy practitioner Rob Patterson, who has spent several decades becoming an expert in this neglected condition. In 2014 he set up the UK’s first Thoracic Outlet Syndrome Centre of Excellence at his private practice in Bristol.

TOS is the term given to a constellation of signs and symptoms that may affect the head, face, neck, upper back, chest and upper limbs that are triggered by compression of the nerves, vein or artery in the thoracic outlet at the base of the neck.
The broad range of symptoms means that, ‘At some point, most physios working within orthopaedics, spinal and hand specialisms will have had contact with a patient with TOS, probably without knowing it’, says Mr Patterson.
He attributes the lack of awareness of TOS to the fact that it falls between surgical specialisms. ‘The gap is because nobody really owns that part of the body – it is a communication problem between the side of the neck and the armpit. In the UK you have spinal specialists and upper limb specialists, but not “in between” specialists,’ he explains.
The void first became apparent to Mr Patterson in the early 1990s. He went on to become an  extended scope practitioner, working as an orthopaedic clinical assistant, after a randomised controlled trial proved he could perform the role just as well as a doctor at reduced cost. In this new capacity, he referred patients he had diagnosed with TOS for treatment elsewhere, only to see many return with ongoing problems.
‘I thought my job was done, but then I’d find out they had gone round the system. They had been denied surgery, labelled as “wrong operation” or “psychological” and ended up with chronic pain under pain clinics. ‘These patients were mainly young and productive, typically people who used keyboards for many hours. This is a treatable condition that is massively wrongly diagnosed,’ he adds.
Nobody knows how many people have TOS in the UK. But Mr Patterson believes that a significant proportion of the 54,000 patients a year who have surgery for carpal tunnel syndrome, and whose symptoms do not improve afterwards, could have the condition.

After speaking to all the relevant surgical colleges, he found that the surgeon operating most prolifically on patients with TOS had performed 36 operations a year. By contrast, in the US, one of the countries with a growing evidence base for the syndrome, more than 200 operations had been carried out by two surgeons leading in this treatment. They are Karl Illig and Hugh Gelabert, who have produced a new standards document for TOS diagnoses and documentation. Mr Patterson is mentored by both men. Their research estimates that up to 80 people in every 100,000 in the US have TOS and there are now many dedicated treatment clinics.
‘In comparison to other countries, the UK is lagging behind,’ he says. Part of the reason TOS persistently goes under the radar here is because it is very difficult to spot in x-rays, ultrasounds and MRI scans. ‘Surgeons are trained to do spot diagnoses and like to be able to identify problems through x-rays, but with TOS this is rarely the case.’
A form that may show up in an investigation is arterial TOS, the rarest form. It can affect violinists who have ‘bow arm’, for example, and go on to develop ischaemia, which is potentially limb threatening.

Most people with the condition have neurogenic TOS. ‘It’s much more common than people think but diagnosing these patients is terribly time consuming. The symptoms can be confused with a host of problems such as fibromyalgia, chronic pain and carpal tunnel syndrome. Diagnosis is an extensive process of elimination of conditions, some of which are very serious, such as lung tumours,’ he adds. However, a way to diagnose TOS accurately has been published in an article by Dr Illig and others. See bit.ly/2tFsNRp
A large part of Mr Patterson’s work now involves lecturing on this diagnostic process. He recently presented at the Derby Advanced Hand Course to an audience of surgeons and physiotherapists.
He also raises awareness of the condition among his profession and is especially keen to hear from other advanced practitioner physiotherapists who are trained to diagnose but may be unaware of the condition.
‘If it is identified early, 80 per cent of patients with the neurogenic form can be treated through conservative management, but if it is missed and the compressed nerves become damaged, then the only way is to treat surgically,’ he says.
Mr Patterson has developed a protocol for conservative treatment and also uses physiotherapy and techniques such as Botox and Scalene blocks. ‘I’m really keen to get the word out to develop associations to raise awareness of the condition,’ he adds.
To contact Mr Patterson, email rob@cheringtonpractice.co.ukfl