Tapping into technology: Life-changing improvements for people with Parkinson’s

New technologies could boost the mobility of people with Parkinson’s. Gill Hitchcock looks at the pros and cons of ‘exergames’ and apps 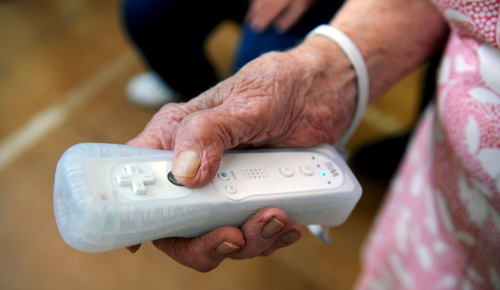 In May Lynn Rochester, physiotherapist and professor of human movement science at Newcastle University, was at an event at 10 Downing Street where she discussed how her research could drive life-changing improvements for people with Parkinson’s disease.

It was an opportunity for Professor Rochester, who practised as a physiotherapist in the north-east before moving into research, to set out some of the work on gait and mobility in older adults that has engaged her and a thriving team of up to 20 researchers over the past six years.

One of the ongoing areas of focus for the multidisciplinary team is finding interventions which mean a better quality of life for the 10 million people worldwide with Parkinson’s.

‘There is a fantastic body of work that shows keeping moving and active is critical to protect people as they age, and this may be even more important for people with Parkinson’s. The more we can give people tools to allow that to happen, the better,’ she says.

Evidence is growing for the use of exercise-based computer games, or ‘exergames’, to retrain motor function in people with Parkinson’s disease and the charity Parkinson’s UK has funded the Newcastle team to write and develop a bespoke exergame.

‘A lot of the commercially available games are too difficult,’ says Professor Rochester. ’For people with Parkinson’s there is an element of cognitive dysfunction that is present from early on in the disease and a lot of games have a huge amount of cognitive, as well as physical, requirements.  We wanted to control that and we built up the layers of difficulty that someone could move to within the game.’

A prototype exergame, which is controlled by body movement, has been developed by the team in conjunction with computer scientists, artists and users.  ‘Our game has someone moving through a virtual environment and it’s based on collecting apples, picking fruit in an orchard. So the user has to move their arms or legs, depending on the level of difficulty,’ says Professor Rochester.

‘Of course there are obstacles, so there could be overhead cables, bees and sheep getting in the way, and by moving your feet and hands you steer a tractor and pick the fruit.  So the person’s body movement drives and controls the game. The better your movement the more successful you will be at making sure you don’t run into sheep or get stung by bees.’

Feedback from users has been very positive and many said they would like to use it at home.  A review of evidence from the prototype also contains positive news, not least that it can improve motor symptoms in people with Parkinson’s and that games tailored towards Parkinson’s symptoms can improve the enjoyment, motivation and effectiveness of exercise. But it says that large randomised control trials are needed to examine safety and efficacy.

Microsoft Kinect, with its movement sensor, also appears to have potential for Parkinson’s.  Like the Newcastle exergame, Kinect uses a camera-based sensor to directly control computer games through body movement. It tracks the position of a person’s limbs or body without the need for handheld controls.

Professor Rochester says that evidence around the safety and efficacy of Kinect at home has yet to be established. And Suma Suremdranath, Parkinson’s UK’s professional engagement and education manager, says cost and technical complexity are hurdles to widespread adoption.

But Ms Suremdranath, who has nine years’ experience as a physiotherapist, adds: ‘What we do know is that getting people to exercise regularly is a massive problem in the wider population, not just for people affected by Parkinson’s. And certainly those technologies, like Kinect and Nintendo Wii, are ways of getting people to exercise and not really think about the fact that they are exercising.

‘Going to the gym is a very conscious activity; whereas if going on the Wii is about playing with your children or grandchildren, it can be a nice way of exercising.’

Parkinson’s UK was aware that a lot of people with the disease were using the Wii when it funded research into its benefits in 2012.  Katie Le Blonde, the charity’s research development manager, says that although the research was small scale and her organisation did not want to draw any ‘strong conclusions’, the Wii seemed to help with balance and with a general feeling of wellbeing.

‘As a charity, we recommend that if people with Parkinson’s find this type of exercise enjoyable and safe, then they should absolutely carry on doing it,’ she says. ‘But I don’t think we have a research base at the moment which shows if you do “x” amount of exercise for “this” amount of time, it will improve your symptoms.’

Parkinson’s UK is keeping an eye on is the growing use of smartphone apps, particularly those designed to monitor activities which can help to ‘normalise’ exercise as an everyday activity.

‘Using the Wii to take part in a tennis match becomes as much about spending time with family as it does about keeping active,’ says Ms Suremdranath. ‘The monitoring-type apps also help to keep track of what people have been doing which might also help with motivation.’

Basic apps can be free, but users are required to pay for more advanced settings, so they need to check the terms and conditions before downloading them. According to Ms Suremdranath apps that might be of potential use are Endomondo, Fitbit, Mapmyfitness and Moves.   The Fitnessbuddy app outlines how to do specific exercises, but she points out that it is always advisable for the user to speak to a physiotherapist to ensure the exercises are appropriate and being done correctly.

Last year an app to improve the speech of people with Parkinson’s was developed at the University of Portsmouth, with an innovation grant from the charity. Ms Le Blonde explains: ‘We know that speech problems are very common in people with Parkinson’s, so a lot of people find that their voice becomes much quieter.   The idea of the app was very simple: to give people feedback on the volume of their voice and help them increase the volume to what would be normal level.’

Meanwhile, Professor Rochester is leading the clinical trials in the UK of a multi-centred study on a virtual reality treadmill, called V-Time, the results of which are expected in 2016. ‘In this project, coordinated by Professor Jeffrey Hausdorff at Tel Aviv University in Israel, we are recruiting people who fall and comparing virtual reality treadmill training to actual treadmill training alone,’ she says.

‘And this is really linked into the notion that we don’t just move around without using the cognitive portions of our brain, and we need to be train cognitive and motor systems to get optimal benefit.’

Tapping into the potential for technologies, bespoke and off-the-shelf, to help people affected by Parkinson’s and other conditions, requires professional expertise and for the voices of those directly affected to be heard. Dr Vines says: ’The challenge is understanding everyone’s different needs and tailoring the technology so that it makes a real impact on society.’