In the run-up to World Mental Health Day on 10 October, Gill Hitchcock reports on a physio-led football project in Dundee. 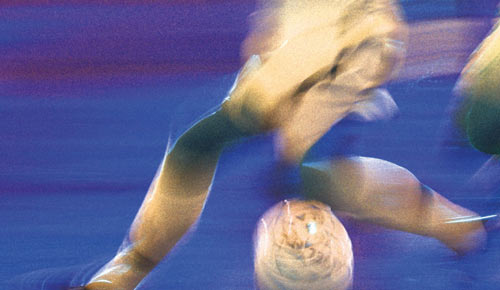 Thinking of Scottish football clubs and Celtic, Aberdeen and Ardler Athletic might come to mind. Perhaps you haven’t heard of Ardler? Unlike the other clubs on this list, it is not in the Scottish Premiership, nor won international trophies.

Since 2011, however, Ardler Athletic has been tackling mental illness by bringing men with conditions ranging from moderate depression to schizophrenia together, to exercise, socialise and boost their self-esteem. Unlike the other clubs, it is run by physiotherapists.

Ardler Athletic is part of a football therapy project at the physiotherapy department of the Carseview adult psychiatric centre in Dundee. It is spearheaded by senior physiotherapist Gillian McDonald and physiotherapy support worker Lee Shaw, and the players are all patients at the centre.

So what prompted the physios to start football therapy? ‘We were working with adults with mental health conditions on a daily basis – on the ward and in the community – and realised that most of them were not engaging in recommended levels of exercise and were suffering the consequences,’ says Mr Shaw.

In its mental health strategy 2012-15, the Scottish government acknowledges that the poor life expectancy of people with mental illness is as much driven by poor physical health and health behaviours as it is by their mental illness.

‘Though we know activity has physical and mental health benefits, currently only 39 per cent of the adult population in Scotland achieve the minimum guidelines of 30 minutes five times per week of physical activity,’ the document says.

As part of its commitment to improve the health of people with mental illness, the Scottish government produced guidance for NHS boards and a framework on developing local approaches.

A partnership between NHS Tayside health board and Dundee city council enables the team to use a community sports centre free of charge, and the health board funds the services of the two physios.

In May Carol Doherty, a physiotherapist and second year master’s student at Aberdeen’s Robert Gordon university completed a clinical placement at Carseview. She documented her experiences with the football therapy project and writes: ‘The (Ardler Athletic players) have become valued users of the community centre and now they are now sponsored by management, helping the players raise funds for uniforms, travel expenses and join team leagues.’

Asked why she found this type of activity important for men with mental illness she tells Frontline: ‘First, the fact that people with mental health problems are at risk of chronic physical conditions, it’s so important for them to be exercising regularly.

‘And, second, there is the social side of things. I found, from working with the inpatients, a lot of people who feel completely alone. Perhaps they have problems with their families, are extremely isolated, struggling to come to terms with what has happened and are feeling a lot of guilt, feeling stigmatised.

‘So I think for the footballers, who are all experiencing a mental health condition, it can enable them to come together and not feel so alone, and help with their self-esteem as well.’

She believes the football sessions provide a sense of purpose and routine for the men. Mr Shaw says he has seen an improvement in their social skills and tolerance towards one another, and that the project has prevented unnecessary hospital admissions.

‘This is because the supportive and inclusive nature of the team enables staff and participants to offer assistance and recognise the early warning signs of someone becoming unwell. This can facilitate early intervention and management of individual conditions,’ he says.

There have been setbacks, however. Ms Doherty writes that in 2013 Mr Shaw organised friendly matches against local community teams with the long-term aim of progressing some of the Ardler players to join these teams. But the competitions put considerable pressure on the players and the plan was abandoned as unrealistic.

But after what Ms McDonald calls ‘badgering from us’, this year the Scottish Football Association set up a mental health league, aimed at allowing teams to compete in an environment which will benefit their recovery and physical fitness. The association says the league will hold four competition days over the course of a season, with teams playing a number of games throughout.

On 6 September the Ardler Athletic players headed south for Edinburgh to compete in a National Suicide Prevention Week tournament, organised by Choose Life, Scotland’s national programme to prevent suicide. ‘One of our guys with cerebral palsy went up and collected a trophy,’ says Mr Shaw.

Mr Shaw thinks Carseview has the only NHS football project to be run by physios. As Ms Doherty says: ‘Physios are movement specialists, so they’re most suited to doing this, and provide a structured and evidence-based programme. The nature of sport means some of the boys get injured, so it helps having a qualified physio, Gill, to apply some of her musculoskeletal skills.’

She writes of the strong professional relationship between the physiotherapists and players and that Mr Shaw and Ms McDonald consistently put the player’s needs at the centre of their practice, encouraging self-confidence and offering support at all times. ‘This is shown when Lee describes the importance of being “player”-centred, recognising that some of the players need more support than others. Nonetheless, he also stresses the importance of players becoming self-autonomous and makes sure he does not “baby” players.’

A clinical audit in the initial 12 weeks of the project, based on measurements of height and weight and body mass index, showed good results, according to Ms McDonald. But a wider audit is under way to assess its impact on social interaction and mood.

Ms Doherty tells Frontline that she would like to see more football and other sporting activities available to mental health patients in Scotland, and for them to be open to women. She writes: ‘It seems Dundee’s football therapy players have a positive future. ‘As well as maintaining their physical health through regular exercise, they also continue to be valued members of a team, achieving physical, social and personal goals through sport.’ fl

A view from the pitch

Grant: ‘Joining football therapy and playing with the team gave me the confidence to try new things outside the service, so I started doing other activities in the community and have started running most days. I recently completed my first half marathon in Edinburgh to raise funds for the team. I would never have gone to a new city let alone run a half marathon a few years back, so things have changed for the better.’

Steven: ‘Football therapy has been the best thing that’s ever happened to me. At first, I found it hard. I kept myself to myself, and didn’t talk much with the others. I suppose I was introverted. But the more I went, it got easier. I got to know the other boys and realised I didn’t mind talking to them. In fact, I realised I actually quite liked some of them.

Slowly my mood started getting better. I started looking forward to going out places and wanted to socialise outside of the football club. I hadn’t ever felt this way before, so this was a big change.’ Ardler Athletic players were talking to Carol Doherty