As a new cohort of physio students embark on their careers, Gill Hitchcock talks to five students about their varied careers before opting to be a physio. 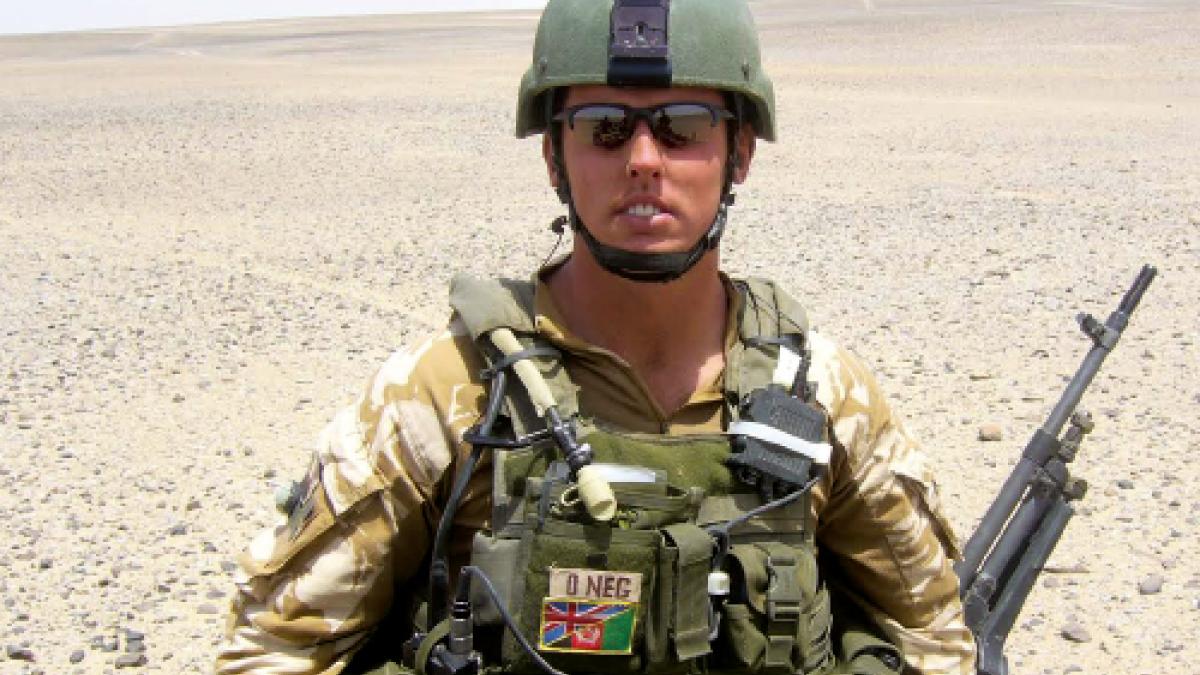 Mark Williams (pictured above) joined up at 16 and by 20 was the youngest sniper in the Royal Marines, trained to take the shot even with the enemy a mile away. But in 2010, travelling in convoy in southern Afghanistan, the vehicle in front of his was blown up and he was injured. He underwent complete shoulder and ankle reconstructions and his hearing never recovered.
‘When I was medically discharged in September 2012, I felt unnerved,’ Mark says. ‘I’d always been in the military and didn’t want to do anything else. I loved it.’
He went into maritime security for a while – anti-piracy patrols in the Indian Ocean. But he was married by then, and wanted a more stable career and to be at home. Training in physiotherapy proved to be the solution.
Mark is one of about 3,000 physiotherapy students in the UK who are ‘mature’ – people aged 21 or older who have traded existing careers and lifestyles for learning new skills.
Now a student at Brunel University, Mark was in part inspired by seeing the progress made by a close friend at Headley Court, the military rehabilitation facility in Surrey, after losing both legs and an arm. ‘And you think, “that’s amazing”, the care pathways and the transitions,’ Mark says. ‘If you can be part of that and make some difference, then that really is positive.’
Mark’s wife, Major Sarah Williams, is a physio at Headley Court, but he’s happy to be learning his trade in the NHS where, he says, he’ll be exposed to a broader range of patient groups.
As a former military man, Mark prefers to lead than to follow along. To that end, he’s become a CSP rep at Brunel. ‘I wanted to find out more about the group of people I’m working with, find out how the university ticks,’ he says. ‘I actually quite like to have my say.’

Going back to university, or going for the first time, can be a challenging process for some mature students. Amy Griffiths, for 10 years a cabin-crew member for Virgin Atlantic, says it was hard at first, making the leap from an access course to her first year at the University of Birmingham.
‘There are about 60 of us and we’re split into three groups,’ she says. ‘But I was in a group with another five mature students, so I haven’t felt out of place.’ Amy was approaching 30 when she began thinking about a career change. ‘I fell into being cabin crew and 10 years flew by, but I knew I didn’t want to do it forever. It wasn’t fulfilling me mentally or emotionally.’
She says she went ‘back to the drawing board’ because she wanted to be able to say she made a difference to people’s lives. But in her final year, the harsh reality of life in the health service become clear. ‘I think it’s the beginning of the end for the NHS, to be honest, which makes me very sad. The NHS is the envy of the world but I see it struggling.’
Amy’s experience in working with air passengers for so many years clearly gives her useful insights into identifying and addressing people’s needs. But, she believes that, whatever their background, older students can bring a range of insights and skills that may give them an advantage.

Daniel Imeson worked in neuroscience research and later taught English in Spain before studying physiotherapy at the University of Central Lancashire.
Now 30, he first considered becoming a physio while still at school but in the end he followed a different route. ‘It’s a bit of a shame really, but I’m just happy that it’s happening now,’ he says of the circuitous path he’s taken back to physiotherapy.
He found working in research quite isolating.
‘I really wanted some interaction and to be on the frontline and helping people. So it made me reconsider what I wanted to do.’
Work experience in hospital outpatient departments helped clarify his thoughts. ‘That’s what led to me applying to do the degree, really.’
Daniel adds: ‘The life skills I’ve had from before have helped with my physio studies. I used to be shy but over the course of my twenties have come out a lot more. I wasn’t the best student first time around but I’ve learned from my mistakes – my time management, not leaving things to the last minute.’
His burgeoning confidence has helped him take on other roles as well. ‘As a CSP rep I was elected onto the student executive committee of the CSP, too. I’ve been the president of the European Confederation for Physical Therapy Students and I didn’t realise until the last minute, “Okay, I can do this”. If you just push yourself, even though it’s out of your comfort zone, sometimes opportunities can arise.’

After many years being a self-described stay-at-home mum, Jayne Roscamp is certainly pushing herself. But as a third-year physio student at Sheffield Hallam University, she found that the creativity and inventiveness she developed home-educating three of her four children stood her in good stead.
Jayne says: ‘Home education is a huge thing now, but back about 15 or so years ago it wasn’t. A number of my friends and I forged local home-ed social groups, organised activities and created specialised tutors for different things. We got ourselves together and did French, history and music. That resourcefulness is probably a huge part of physiotherapy.’
Having left school without A-levels, her first step to becoming a physio was to do a health sciences access course at a local college. ‘I guess within the first month I realised I’d made the right decision and that it was very good to be developing that side of me.’
Jayne is not the only NHS student in her household – her daughter is studying mental health nursing. ‘I do see myself within the NHS,’ Jayne says. ‘I’m a firm believer in its merits. And I’ve worked as a personal trainer and taught exercise classes so I know the pressures of being self-employed. I found that quite stressful – the selling-yourself part of it. I don’t think that’s right for me.’

Philip Dixon is also intent on staying in the NHS, whatever the challenges. The former teacher and youth worker is in his third year at Northumbria University, Philip says he’s looking forward to being an NHS-employed physio. He says: ‘Jeremy Hunt [health secretary for England] needs to take on board a lot more of what bodies such as the CSP have to say, and look at the evidence for the effectiveness and cost-saving nature of physiotherapy.’
Although he sees parallels between teaching and physiotherapy, it was the birth of his nephew with cerebral palsy that really got him interested. ‘He has a lot of physiotherapy input and I kind of got the bug for it,’ Philip explains. ‘I found out more, did some voluntary experience working alongside a physio in a range of hospitals across the Rotherham area, and then applied.’ Philip says if he’d known at 18 that physiotherapy was a career option, he might have pursued it. ‘Instead, it was only through teaching health and social care that I became exposed to all these other healthcare professions.’
Joining the profession later has enabled him to approach his chosen career equipped with broad experience. ‘There’s not a day in placement when I don’t draw on skills I’ve learnt elsewhere,’ he says. fl