Fiona Mather is Team GB’s chief physiotherapist. Frontline caught up with her as she prepared to start work in Sochi 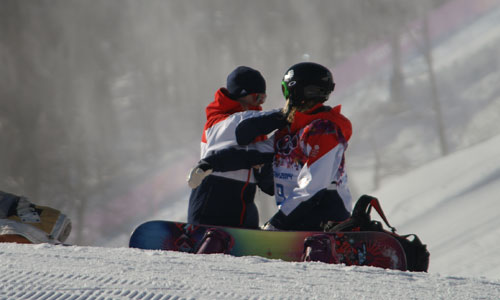 The Winter Olympics which begin on 6 February in Sochi, southern Russia, are the pinnacle of many athletes’ career. Often the last person they speak with before competing is their physio.

Along with headquarters physio Sian Knott, and five sport specific physios, they are responsible for Team GB’s 57 athletes. 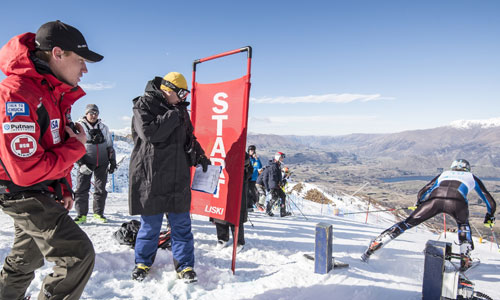 Jersey-based Paul Frankham is also going to Sochi, as one of the two physios for the United States men’s alpine team.

The knee is the most commonly injured body part in skiing, said Mr Frankham, ‘and when skiers are travelling at speeds up to 90 miles an hour down an ice hill, injuries are inevitable.’

The Paralympics in 2012 had a big impact on the public and while the GB team is a lot smaller for these winter Games, many athletes have successfully qualified thanks to close working with their physiotherapists during years of rehabilitation.

From 8 March, 15 athletes will compete in alpine skiing and wheelchair curling. Both teams have sports-accredited physios with them – Paul Gould and Craig More. 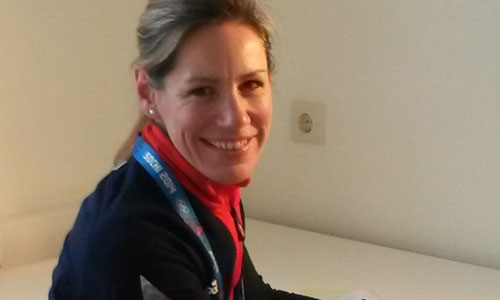 Fiona Mather is leading the physio team in Sochi

You are involved with Glasgow 2014 but can we also have a little biographical background?

After studying at Glasgow Caledonian University and University College London I worked full time in the NHS before taking a full time role as a rehabilitation specialist with Scottish Rugby Union. In 2003 I began my current role as head of physiotherapy at sportscotland Institute of Sport.

One of the headline objectives of sportscotland is to support athletes on the world stage and that allows me the opportunity of providing physiotherapy at major games such as Commonwealth Games and Olympic Games. I have been fortunate enough to work on behalf of the British Olympic Association at a number of Games, most recently at London 2012 and now in Sochi 2014.

Please tell us about the physio team infrastructure.

As the British Olympic Association (BOA) chief physiotherapist my role is to work with the rest of the physiotherapy team to provide the optimal environment and support to allow athletes to perform on the word stage within their specific discipline.

The support team was selected almost a year ago and since then we have been meeting regularly to plan and prepare how we will operate during games time – this covers everything from travel, equipment and consumables, logistics, communication pathways and scenario planning.

This preparation facilitates a very smooth transition for athletes coming into the Olympic environment.
Winter sports bring additional factors into performance and the high risk nature of sports, necessitates a very experienced physiotherapy and medical team which I feel very privileged to be a part of here in Sochi.

The BOA have set up performance centres, including a physiotherapy rehabilitation unit within the athletes’ accommodation which allows athletes access to expertise and equipment required to support their preparation and recovery.

This ensures athletes can stay focused on their performance and ensures they arrive at the start line in the best possible shape. Sport specific physios provide essential continuity of support and are travelling with the athletes throughout the competitive season and it is imperative that during the Olympics the continuity and preparation is the same as every competition whilst managing the additional pressures and distractions which inevitably occur in the Olympic environment.

How may the obvious environmental differences between the summer and winter sports impact on training?

Training – often athletes have to wait for optimal conditions snow, light, temperature – this causes issues with planning and scheduling not to mention rest and recovery and maintaining injury prevention strategies.

Athletes spend long seasons out of the UK and may not have easy access to physio support unless they have a physio travelling with the team. The home country institutes support the provision of travelling support and remote medical support. They also have in some disciplines very technical equipment and in the sliding sports spend a long time preparing their equipment for the next day.

Will the injury profiles be very discipline-specific - and will they be ‘dramatic’?

A greater percentage of injuries are traumatic in winter sports because of the high risk nature. It can be difficult to predict the pattern or minimise the risk. However in sport by understanding the demands we can work effectively within the multi-disciplinary team and coaching staff.

We can also influence training programmes so that athletes can compete without injury and are physically capable of coping with the demands of the sport.

Sochi: where our physios are working

Based at the Coastal Village will be Maggie Bush with the curling teams, Mike Brownlow, the short track speed skaters, and Sian Knott, the figure skaters.

At the Mountain Village the skeleton team will be looked after by Kay Robinson, the bobsleigh teams by Ashleigh Wallace and the snowboard and freestyle skiers by Alison Robb.

Fiona Mather is based in both the Mountain and Endurance Villages with the cross-country and the alpine skiers and the biathlon competitors.