Services redesign: getting it right 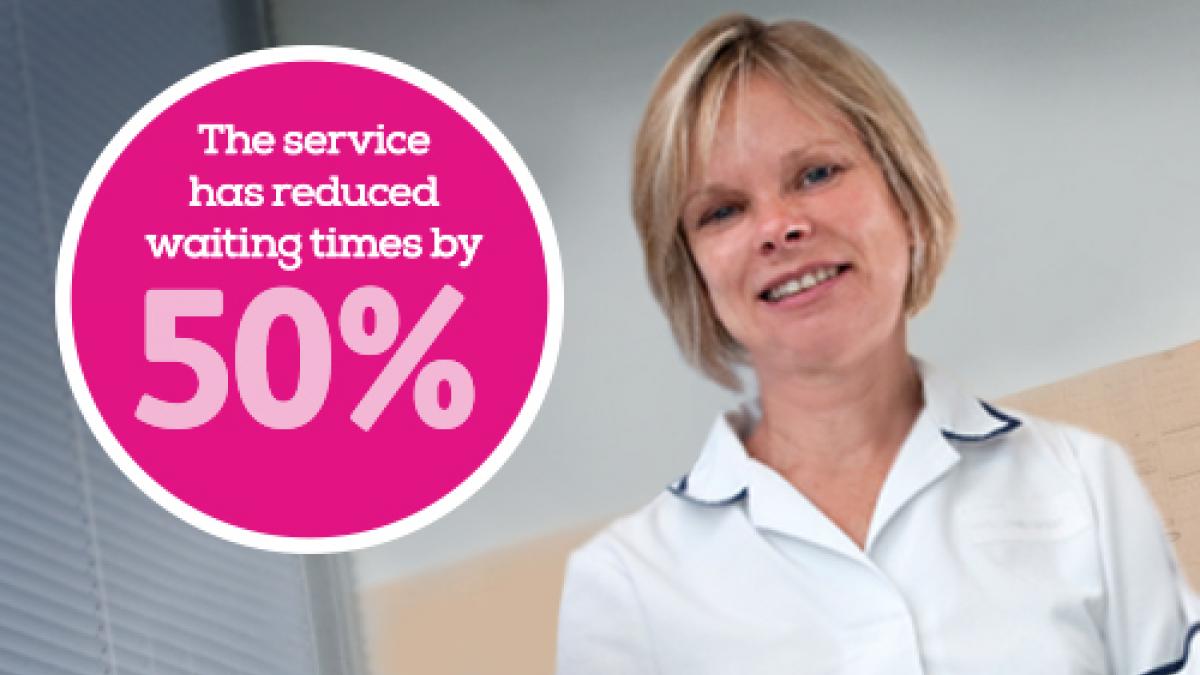 Winning one of the four CSP service excellence awards last year was a considerable feather in the cap for Janice McNee and colleagues at NHS Tayside. The team, which redesigned its musculoskeletal (MSK) outpatient service, won the ‘enhancing patient dignity and standards of care’ category at the awards ceremony in London last December.
‘All Scottish health boards had been tasked by the government with bringing down waiting times for physiotherapy MSK appointments to a maximum of four weeks by March 2016,’ explains Janice McNee, who leads the MSK outpatient team in Dundee. ‘So far, we have brought waiting times down from 12 weeks to six.’
Ms McNee was speaking during a Frontline visit to Tayside earlier this year. As well as being a national figure – she is secretary to the CSP Scottish Board – and holding down her MSK lead post, Ms McNee is also interim head of physiotherapy and community therapy services, which she holds on a job-share basis. She is based at Dundee’s Kings Cross health and community care centre, where Ms McNee and her colleagues’ pride in winning the CSP award was clearly evident.
Also present at the visit were some of those who took up the challenge of revamping the local MSK service to meet the NHS Scotland waiting times limit. They explained that NHS Tayside has three constituent parts: Dundee, Perth and Kinross, and Angus. Sharing coterminous boundaries with the local police force, this region of east Scotland has a range of urban and rural communities with some relatively deprived and affluent patients. The region spreads over some 3,000 square miles.
As well Ms McNee, also present were Morag Hambleton, who combines a part-time role as physiotherapy service manager in Angus with another as service improvement lead for the allied health professions (AHPs) in Dundee, and Lynne Sutherland, outpatient lead for the physiotherapy service in Angus. We were joined via telephone by Norma Patrick, head of the Perth and Kinross physiotherapy service. Angela Murphy, AHP lead for Angus was another member of the core team.

How did they go about redesigning the MSK service? ‘We got together at the beginning to look at where we were and where we wanted to end up,’ says Ms McNee. They consulted with key stakeholders, such as orthopaedic, neurology and plastic surgery consultants, GPs, clinicians such as nurses and radiologists, managers, allied health profession (AHP) leads and patients.
‘We held both staff and patient focus groups,’ says Ms McNee. ‘The patients were very positive: all they wanted was to be seen by the right person, in the right place and at the right time. Local audits showed that about 40 per cent of people being referred to orthopaedic surgeons could be dealt with at primary care level. So the surgeons were “on board” with the redesign because they could see how their workload would be cut.’
Ms Hambleton says: ‘In recent years, we had concluded that we needed a single pathway for patients with MSK problems. We opted, probably uniquely, to have a collective MSK pathway. We recognised for the patients, staff and system, we wanted to keep it as smooth as possible, and with the least amount of “waste”.
She said that other boards had opted to set up pathways linked to specific parts of the body, such as the foot and ankle. ‘But at the end of the day, all the patients are going to end up at the same point: the MSK pathway. Then you have physiotherapy or are referred to secondary care.’
Ms McNee says: ‘We did a whole lot of up-skilling for our staff. Now all our band 7 physios and above can request imaging: X-rays, MRIs, ultrasound. A lot of our band 6s and above can do joint and soft tissue steroid injections, which has changed the patient experience because of lot of our GPs don’t inject.’ A recent audit showed that 95 per cent of patients treated with corticosteroid injection were managed solely by physiotherapists, she says.
‘Now patients can be referred directly to physio rather than to secondary care. It’s improved the skills of physios, reduced the pressure on secondary care and means patients can get all their treatment in one centre.’

Cost-wise, the revamped AHP pathway, which includes occupational therapists and dietitians, has meant £151,000 less is spent on patients with patients with MSK problems. ‘We are, for example, cheaper than a consultant when giving an injection,’ says Ms McNee.
Ms Sutherland says 38 physios in the region can now request imaging, having followed standardised training programmes with additional mentoring each year. For Ms Hambleton, such developments are welcomed by staff, some of whom, she acknowledges, could get ‘stuck in a treadmill’ in the past. Anecdotal reports from radiography departments suggest AHPs have a superior imaging ‘hit rate’ compared to GPs [meaning the right kind of image was requested], says Ms McNee. When consultants see the patient, they already have the image needed and can refer them for surgery when this is appropriate, she notes.

Ms Hambleton stresses the new pathway takes a lot of strain out of the patient’s journey because they are now less likely to undergo long waits to see a consultant and have tests done, only to be referred to physiotherapy at the end of the process.
‘The whole process is much more streamlined,’ she says. ‘We can now refer patients directly to secondary care, rather than having to refer them back to the GP suggesting that they do a referral, for example. There is an awful lot of “to-ing and fro-ing” that we have eliminated.’
As a result of the service overhaul, three patients in 10 attending fracture clinics are referred to a physiotherapy fast-track service where they receive advice on the day of referral. As a result, they report less of the stiffness and pain traditionally associated with fractures and soft tissue problems, and a reduction in ‘chronicity’.
Patients are also able to refer themselves for physiotherapy, without going through a GP, giving them speedy access to telephone triage and treatment. One patient stated: ‘I was very unsure about how this would all work, making a phone call, but the service from start to finish has been marvellous.’
In addition, says Ms McNee, a Tayside GP/AHP MSK decision support tool has been developed that replaces the need for individual documents for each clinical MSK pathway. ‘This has now been so successful the national MSK team has commissioned it for all health boards.
To find out more, visit their website here.  It is accessible to anyone with an nhs.net or scot.nhs.uk email address.’ fl