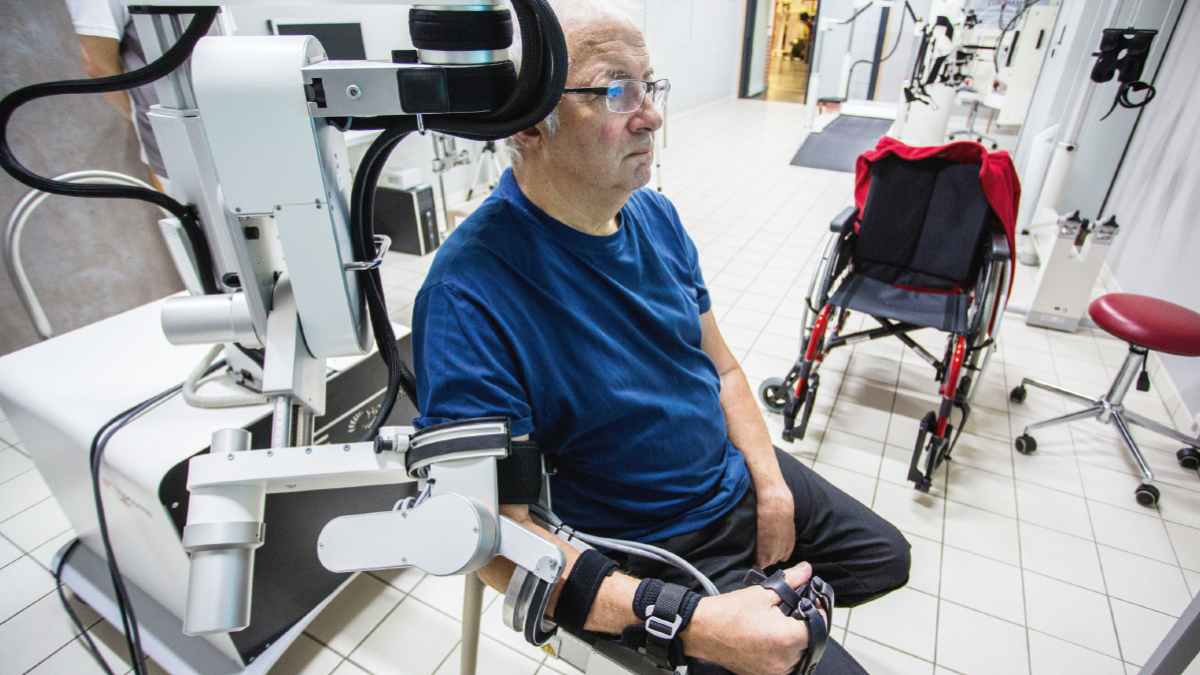 Around 80 per cent of people who have a stroke experience some loss of arm function. This has a distressing and often lasting impact on their quality of life, with everyday tasks such as washing and dressing becoming difficult.

Robot-assisted training can help stroke patients with moderate or severe upper limb impairment to perform repetitive tasks. A 2018 Cochrane Review of 45 trials with 1,619 participants found significantly improved function at the end of training but the studies were generally small and the quality of evidence generally low.

Enhanced therapy programmes focus on repetitive practice of everyday tasks and have been associated with improved arm function in previous smaller studies.

Known as ‘RATULS’ (robot assisted training for the upper limb after stroke), this trial is the largest study of its kind. Its findings should be more reliable because of its size and the harmonisation of treatment protocols, devices and outcomes.

RATULS was a randomised controlled trial carried out at four NHS centres in the UK between 2014 and 2018. A total of 770 adult stroke patients (average age 61) with moderate or severe upper limb functional limitation, were recruited between one and five years after their first stroke. They received either robot-assisted training using the MIT-Manus robotic gym (257 patients), enhanced therapy (259 patients), or usual NHS care (254 patients).

Robot-assisted training and enhanced therapy were provided for 45 minutes, three times per week for 12 weeks, in addition to usual post-stroke care.

After three months, improvement in participants’ arm function was measured, using the Action Research Arm Test (ARAT), which assesses the ability to perform basic tasks. This was a robust trial design, and the results should be reliable.

What does current guidance say on this issue?

NICE recommends that stroke patients are offered a minimum of 45 minutes of an appropriate therapy for a minimum of five days per week.

If a patient is unable to participate for 45 minutes of therapy, it should still be offered on five days per week, for a shorter time. If more rehabilitation is needed at a later stage, then this should be tailored to the patient’s individual needs.

The RATULS trial suggests that neither robot-assisted training nor enhanced therapy would be effective if routinely used for stroke patients with moderate or severe weakness of the arm after a stroke. Although robot-assisted training can give measurable improvements in upper limb impairment, translating these into real-life changes in function and improvements in daily activities remains a challenge.

This picture may change if we discover how to target these therapies more effectively to different groups, perhaps those with milder weakness, and when best to use them in the recovery phase of stroke.

These results may help inform guidelines in the rehabilitation of people who have suffered a stroke and may help in funding decisions by healthcare commissioners.

The full NIHR Signal and additional expert commentary was published on 6 August 2019.

This NIHR-funded trial was the largest robot therapy trial ever completed. The findings support the Royal College of Physicians (2016) current guidelines that robots should only be offered as an adjunct to conventional therapy or in the context of a clinical trial.

This trial matters because it contributes to data sets of stroke rehabilitation. Why did this trial not show a more positive result? Firstly, robot therapy may not be effective for everyone in the chosen population. Secondly, the robot used did not allow participants to practice functional tasks, and thirdly, participants with severe arm weakness and those over one-year post-stroke may not have the potential for recovery. It may also illustrate why large randomised controlled trials that provide standardised therapy for all participants may not generate meaningful clinical outcomes. In clinical practice patients do not receive such rigid therapy because their problems are varied and variable.

We need to consider what alternative research methodologies might be more appropriate in neurological rehabilitation. Data mining of large datasets may identify what factors predict response to which therapy enabling testing of personalised rehabilitation.