A Devon-based team of neuro and stroke specialists can help you find the best treatment and rehab apps. Daniel Allen reports. 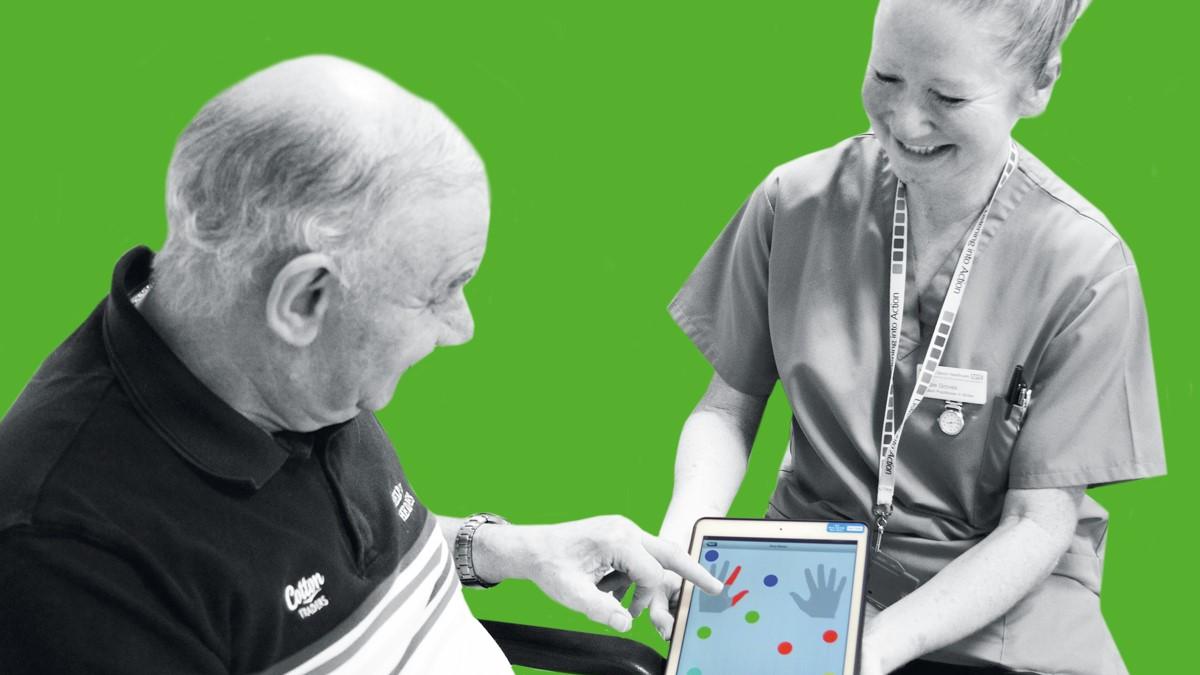 Turn your back on technology and it gallops past leaving you breathless and confused and asking a teenager how your phone works. But harness it and it can bring profound change to how we live and work. A multidisciplinary team of stroke and brain injury specialists in Devon, far from being overawed by the dizzying pace of technological change, has embraced one aspect of it to create a resource that is rapidly gaining a global following.
Mytherappy is a simple idea that seeks to make sense of a massive market. There are, says Ruth Siewruk, occupational therapist and Mytherappy clinical lead, an estimated two million health apps available to download.
For time-pressed professionals, finding one that might, safely, be recommended for use by a patient is a herculean task. Mytherappy takes on that role, displaying on its website reviews of health apps that have been assessed according to strict criteria.
The idea behind Mytherappy hatched about five years ago, Ms Siewruk explains. The stroke and neuro team that provides a community service as part of Northern Devon Healthcare NHS Trust found that patients were asking whether any apps could help as part of their treatment and rehabilitation.
Louise Holmes, a band 6 neuro-specialist physiotherapist and part of the Mytherappy team, stresses there is no question of apps replacing the treatment offered by skilled professionals. ‘An app is very much an adjunct to what we do,’ she says. ‘You have to justify why you’re using it, just as you would any other treatment technique.’

What were the first steps?

‘We didn’t know [the answers] so we did some research, spoke to a whole variety of other teams and started a project that looked into whether apps could be used, and whether they were reliable, valid and clinically assured,’ Ms Siewruk says. It was clear from others working in stroke rehabilitation around the country that there was demand for reliable information about potentially beneficial apps. ‘But they had hit the same wall: they didn’t know which apps to use.’
Pilot studies followed, using apps that passed a testing group’s rigorous assessment, and the results were positive, Ms Siewruk says. ‘Engagement went up, outcomes improved, and patients were motivated and enjoyed doing their therapy using the apps.’

With the support of their trust and the South West Academic Health Science Network, the team secured funding to build a website, launched last year. The site is founded on the principle that apps can contribute to recovery and are a useful treatment tool. All the apps on the site are tested by clinicians and expert patients using a unique pathway and critiquing process. Only those that pass – and Ms Siewruk says 70 per cent of apps fail the 50-point critiquing test – are given the Mytherappy seal of approval.
And how exactly might an app help a patient? Ms Holmes offers an example. ‘From a physio perspective, we’re now starting to use apps to film patients walking. We can then review the film later, as a team, back in the office. We also see a lot of patients with spasticity in their arms. If we can measure the joint angles using an app, film them and take photos that can be seen by the district nurse, the GP and other relevant health professionals, that makes everything a lot smoother. Apps are really opening up a new way of working.’
From a patient’s perspective, an app that monitors progress and shows them how they are improving day by day provides valuable motivation, Ms Holmes adds. The team has half a dozen tablet devices it can loan out and patients have like using apps on them, Ms Holmes says. For those who have had a stroke, if the app is proving beneficial to their rehabilitation, patients can apply for a grant from the Stroke Association to get their own iPad.
An unforeseen issue at the outset was data protection because some apps ask for personal information. So all apps reviewed by the Mytherappy team are subjected to security tests and will not be recommended unless they pass. What’s next? The team already offers a consultancy service to app developers, advising them how they can improve their products. And there are plans to work with developers to advise on gaps in the app market.
Over the past year, the Mytherappy website has attracted international interest and now has users in 110 countries. ‘We get emails from patients and therapists all over the world thanking us for making this information freely available,’ says Ms Siewruk.

CSP head of programme Stuart Palma says: ‘This work demonstrates how technology can, when constructed with efficient quality assurance and the evidence base, really work for the benefit of patients and staff. This is a great example of physiotherapists and allied health professionals working innovatively and collaboratively to lead improvements in the delivery of care.
‘Others looking to develop or use technology to deliver effective and efficient care should follow a similar approach – involve patients and other stakeholders at the beginning, assess need, explore all options, carry out an impact assessment, ensure the change is informed by evidence and, above all, ensure it is safe and robustly evaluated.
'Service users are fundamental throughout the process when implementing or adapting ways of working and care delivery.'