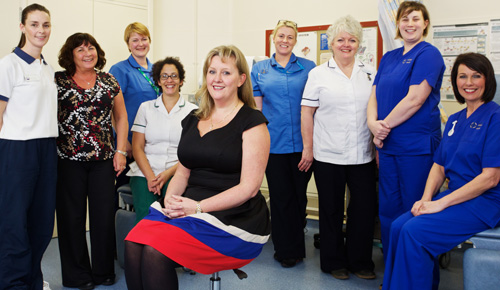 What if an NHS team treated individuals with long-term and debilitating illness successfully and taught them to self-manage their condition for just 69p a day? And what is a hospital team delivered a 100 per cent return on investment for the NHS?

Melanie Thomas says that by enabling patients to ‘see the right person, at the right time and with the right information’, the lymphoedema team at Abertawe Bro Morgannwg (ABM) University Health Board is delivering these financial benefits for NHS Wales.

Lymphoedema, a chronic swelling due to lymphatic system failure, affects five people in every 2,000 in Wales, and the benefits can be significant for them too, maintains Mrs Thomas, the lead Macmillan lymphoedema physiotherapist specialist at ABM.

She manages a Swansea-based team of four physios, three nurses, an occupational therapist (OT) and a radiographer. The service they provide means patients can avoid a protracted round of referrals to disparate services, delaying treatment, prolonging suffering, while costs to the health service rise.

One example is a man who first arrived at Mrs Thomas’ clinic last June 2013 with gross genital swelling caused by repeated cellulitis, a common result of lymphoedema. After numerous visits to his GP, he was referred to a dermatologist, who, in turn, referred him to a urologist. Mrs Thomas taught him about skin care and ensured he received the correct antibiotics. As a result, the swelling rapidly subsided and the infection cleared.

‘From a quality of life perspective, that gentleman is now back living a normal life, whereas previously he was in and out of hospital, work was affected and he was a drain on the NHS because he had an untreated problem,’ she says.

‘But after treatment at our clinic, he was back at work straightaway, able to go swimming and running again and he’s well.  And from a sexuality point of view, everything is fine.’

The service has come a long way since its early days 2001 when Mrs Thomas struggled to get funding. In 2013 it won three awards: in November the CSP’s awards for ‘delivering quality and demonstrating impact’ and ‘physiotherapy service of the year’ awards; and the previous month it was named Macmillan Cancer Support ‘team of the year’.

‘It’s recognised as a gold standard service’ says Mrs Thomas, whose capacity to evangelise about ABM’s approach was enhanced in 2011 when she took on an additional role as lymphoedema national clinical lead for the Welsh Government and a £1 million budget to shake-up services.

Two years earlier, in 2009, Mrs Thomas had produced a strategy document for the government, at a time when there were huge variations in the organisation and delivery of lymphoedema services in Wales. While some local health boards were providing full services, others only treated cancer patients.

The Welsh Government recognised that this diversity resulted from a lack of patient-centred care, and the poor level of knowledge about the disease among health professionals and the public alike. Many people with lymphoedema were going without a diagnosis and treatment for long periods.

Each local health board must have a nominated lead lymphoedema professional who will ensure protocols, care pathways and standards of lymphoedema are being met, it sets out.

The document proved to be a catalyst and by 2012 all seven health boards had a lymphoedema team. Wales now leads the UK by offering patients the chance to have assessments and full intensive treatment, as well as preventive care.

‘We see all patients with breast cancer, penile carcinomas, gynae cancers, melanomas, head and neck cancers even before they have their operation now. We can tell them what they should and shouldn’t be doing, and we follow them up for a year,’ she says.

‘And it’s that year that’s vital. Of those who get lymphoedema, 80 per cent will develop it within that first year. Ultimately, prevention is better than cure. If we can pick these people up when they have only very mild swelling, then they are not going to develop these elephantitic limbs that used to be the case.’

At rehabilitation classes, typically held in local leisure centres, Welsh lymphoedema services encourage patients to exercise and eat healthily. As Mrs Thomas explains: ‘Patients can blame their obesity on lymphoedema, when their weight problem is actually causing the lymphoedema.’

Health professionals from elsewhere in the UK and countries including New Zealand, the US, Spain and Germany are looking to ABM for advice. ‘In our services we promote self-management, but when you look at services where people pay for their care through insurance, it’s more about getting the care, rather than doing the care themselves.’

Self-management and multidisciplinary working are central to the success of the ABM team: ‘We will ask patients “How do you wash your legs?” The physios will get the patients to do it themselves, the nurses will go on their knees and wash the legs for the patient and the OT will give them an aid to wash their legs. So we have the full spectrum.

‘But as a physios we try and promote as much movement and functional ability as possible and get patients to realise and understand what they can do for themselves. Things like manual lymphatic drainage, a massage technique, and putting on compression garments, we get them to do it themselves.’

Another key component is the monthly patient support group, which was established in 2001. Up to 20 patients attend and team members often deliver 30-minute ‘ask the expert’ sessions.

How does the Welsh Government evaluate the service? Mrs Thomas explains that a management software system, Lymcalc, records most aspects of the services across Wales: ‘If you wanted me to tell you how many lower limb patients or upper limb patients we have, I could do that; how many new patients are seen, whether they are cancer or non-cancer, home visits, intensive treatments – anything you could wanted to know, we capture it.

‘We also look at how each of the health boards is performing and it enables us to do quite a lot of performance management.’

The software was behind the introduction of a mobile lymphoedema unit, after it showed that a high number of patients from the Bridgend area failed to attend appointments at the clinic in Swansea, a return journey of about 70 miles.

‘So we put a mobile unit Bridgend’s McArthur Glen shopping village and we have an average of 28 patients a week. This unit then, on different days of the week, goes to different health boards, so it’s shared across the whole of Wales,’ Mrs Thomas explains.

But funding for the mobile unit, with its five clinical rooms, comes from Cardiff-based cancer charity, Tenovus. Without three years of financial backing from Macmillan Cancer Care and the Big Lottery Fund the Swansea team is unlikely to have developed its exemplary services.

Asked whether she has concerns about this reliance on charity and the lottery, Mrs Thomas responds: ‘If it wasn’t for Macmillan we wouldn’t be where we are today in lymphoedema services in Wales.

‘And because of Macmillan and getting posts in place because of its funding, we were able to show how much we saved and how much benefit for patients it was.’

Despite the service improvements, lymphoedema patients in Wales may still have to wait 18 weeks for treatment, which seems like a long time. ‘It does,’ Mrs Thomas agrees. ‘Ideally patients should be seen within six weeks,’ she says.

‘We have got so many patients, and what we are finding now is that our capacity is really high and the only way we can control it is by making sure we have waiting lists.’ Patients classified as ‘urgent’ are seen within four weeks, those needing palliative care within 10 days and ‘routine’ patients are seen within 18 weeks, Mrs Thomas explains.

The Welsh Government aims to cut that wait to 12 weeks by 2016. Mrs Thomas believes this will be achieved by using the right skill mix, with highly experienced staff dealing with complex cases, while band 4 assistants take on mild to moderate cases.

She thinks there should be more collaboration with primary care, so that GPs and other primary care staff know more about lymphoedema and are willing to work collaboratively with specialist teams.

For Ria Lewis, a Macmillan specialist physio with the ABM team, lymphoedema is a fascinating area. ‘It was probably outside my comfort zone originally. I had only really worked on wards or in musculoskeletal outpatient-type environment. But I had worked in oncology and it was really nice not only to be able to see the acute side of treatment, but also the long-term management of oncology patients,’ she says.

Her colleague and fellow Macmillan specialist physio Sian Clement enthuses: ‘I just love working in this team, it’s a second family to me and everybody I work with is very close to my heart.’

At least in part, this must be down to the leadership of Mrs Thomas, who was awarded an MBE in June 2013 for her Wales-wide work on lymphoedema.

‘Last year was an amazing one for accolades,’ she says. ‘But it’s all about raising awareness of lymphoedema. That’s my big thing.

The more people we can get talking about lymphoedema, the better.’ fl

Want to apply for the 2014 CSP Awards? Look at for the launch on 4 April