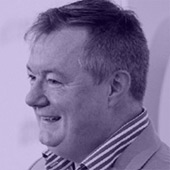 The premise of #EndPJparalysis is remarkably simple and chimes with, and amplifies, the great work that physiotherapists do on a daily basis: get patients up, dressed and moving every day while in hospital. This significantly reduces the risks associated with prolonged bed rest, including sarcopenia, deep vein thrombosis, reduced peristalsis, constipation, lethargy and chest infections. The only remarkable thing about it is that it's also something that Dr Richard Asher was writing about in the British Medical Journal back in 1947!

The secret ingredient of #EndPJparalysis has been that it's not about key performance indicators, targets or Gantt charts - it's about trusting clinicians to do the right thing in the context in which they work. It's why new graduates like Chloe Harris (@_ChloeHarris) in Salisbury NHS Trust, supported by early support discharge lead physiotherapist Emily Scotney (@emily_scotney), can lead the #EndPJparalysis work there.

It's also shown in the great leadership of Barbara Pinguey (@Pinguey23), specialist respiratory physiotherapist at North Cumbria University Hospitals who has led a combined NHS trust effort, including their Cumbria community and mental health partnership colleagues. In many NHS settings, physiotherapists have launched local #EndPJparalysis campaigns by turning up at work in their pyjamas, working closely alongside nursing, medical and other therapy colleagues. The launches have been a lot fun, while being mindful of the serious message about deconditioning and related unintended harm that comes with it.

At its core, #EndPJparalysis is about valuing patients' time and recognising that their time is the most important currency in healthcare. While our time is important and we are busy, our patients' time is sacred and if you had 1,000 days left to live, how many would you choose to spend in hospital? See www.last1000days.com

And it is in the fantastic leadership shown by physiotherapists in embracing and supporting this campaign, that by the end of May we had 70 million Twitter impressions. Together we can humanise healthcare and, in doing so, further humanise ourselves in our care, compassion and commitment to improving patient care.