A pool-based pulmonary rehab service is proving its worth to patients in South Tees, as Julie Penfold discovered. 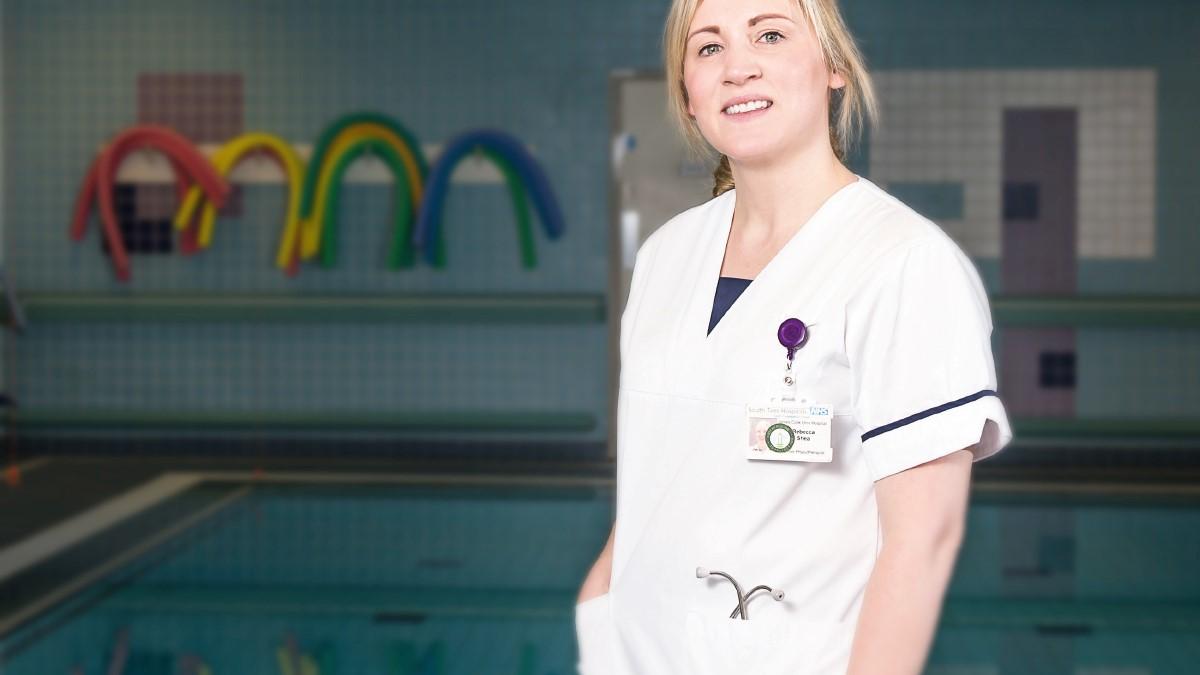 Patients in Teesside with long-term lung conditions are enjoying a specialist hydrotherapy pulmonary rehabilitation programme that is believed to be one of the first in the UK. The pool sessions are designed for patients with long-term respiratory conditions, such as chronic obstructive pulmonary disease (COPD), who need rehabilitation but struggle with gym-based exercise due to joint or mobility issues.
‘We found mobility affected progress with the respiratory health of some of our patients,’ says Rebecca Shea, lead physiotherapist for the pulmonary rehabilitation service at South Tees Hospitals NHS Trust. ‘We felt water-based exercise could work well for those patients but our main problem up until last year was venue availability, as the trust’s two hydrotherapy pools are in high demand.’

When a morning slot opened up at the hydrotherapy pool at Redcar Primary Care Hospital at the end of 2016, the team was able to pilot the alternative treatment. In December 2016, six patients took part in the six-week programme. The weekly sessions were fully attended and the group members gave them a 100 per cent satisfaction rating.
‘In winter patients with long-term lung conditions generally struggle, yet not one pilot patient missed a session,’ says Ms Shea. ‘They thoroughly enjoyed each session and their outcome measures improved. After the pilot, we still had the pool slot at Redcar so we just rolled with it and another six patients started the six-week programme the following week. This year, we have managed to secure a space within the hydrotherapy pool timetable for James Cook University Hospital (the trust’s main site in Middlesbrough) so we now have two venues and two six-week hydrotherapy courses running each week through the year.’
In addition to Ms Shea, the pulmonary rehabilitation team includes three physiotherapists and three physiotherapy assistants. A physiotherapist and an assistant are needed for each hydrotherapy session, one in the water and the other at the poolside. The extra sessions have meant a change to the team’s working hours. ‘We don’t receive extra funding for our extended service, I have just asked my team to work a little harder and longer,’ says Ms Shea. ‘Our traditional pulmonary rehabilitation service has not been affected at all by the introduction of the hydrotherapy sessions. For example, when the sessions run late afternoon at our main site, staff will structure their day slightly differently to cover the class time.’
Groups in each session are small due to the size of the pools, which are around 12 metres long. Referrals mainly come from GPs and patients with respiratory conditions must be registered with a south Teesside surgery. Most patients fall ito the older age group.
The hydrotherapy programme is such a big hit with patients that the two sites now have waiting lists. ‘This is the downside as we are currently unable to offer more hydrotherapy due to lack of additional pool availability,’ says Ms Shea. ‘We see the hydrotherapy sessions as an alternative for those who would potentially struggle with gym-based exercise. However, we advise every patient to at least try the land-based rehabilitation programme first because we run 14 of those sessions a week. Patients who are only interested in hydrotherapy rehabilitation could potentially wait months.’

The service aims to reduce hospital admissions, and subsequent readmissions, for 12 months after a patient completes the pool programme. Attendance is high and the service has not received a single ‘did not attend’ since it began in late 2016. Over the six weeks, the team works on improving the baseline fitness level of patients with respiratory issues. Many also benefit from improved quality of life through the programme. As a bonus, people have developed friendships with other participants.
Patient-reported outcomes from the pool programme include improved joint and lung health. ‘The exercises carried out in the pool are similar to what patients would do in the gym,’ says Ms Shea. ‘They tell us they can breathe more easily and feel they can do more, as they don’t feel they are exerting themselves as much. We also see improvements in the six-minute walks.
‘Prior to patients entering the water for the first time, we carry out an exercise over a 10-metre length,’ she explains. ‘Patients walk up and down until they need to stop due to breathlessness or being limited by pain. The walk is repeated after the six weeks and we usually see improvements in the distance covered and the number of times patients have had to stop. Some improve by around 200 metres. They may have done a 300 metre six-minute walk before starting the hydrotherapy sessions and afterwards, patients can walk around 400-520 metres in the same time.’
Patient satisfaction is ‘through the roof’, says Ms Shea. Elizabeth Parnell was one of the first to try water-based rehab as part of the pilot group at Redcar. ‘I find it much easier to do the exercises in the water,’ Ms Parnell says. ‘In the gym I was more breathless and had to rest in between each exercise.’ Michelle Brudenell, who attended the programme last May, says: ‘I feel like a new woman after each session. The hydrotherapy helps me to breathe much easier.’ And Carol MacDonald, who completed the programme at James Cook University Hospital last June, simply says: ‘The sessions have given me a new lease of life’.
One of the team’s aims is that patients will continue exercising independently to benefit their ongoing respiratory and joint health. Of the six patients from the pilot group, two have joined walking groups and one has joined a gym. Patients also have the option of returning to repeat the pool programme after 12 months, which the pilot group have all done. ‘They recently returned as they loved it so much,’ says Ms Shea. ‘Out of the six patients, only one had a hospital admission between December 2017 and now [last November]. However, the admission record doesn’t say whether this was due to a chest problem.
‘We are unaware of any other hospital in the country offering pulmonary rehabilitation in water,’ adds Ms Shea. ‘This is a very exciting development for our patients.’
Project welcomed

Asked about the South Tees pulmonary rehabilitation in water initiative, the network’s long-term conditions champion Rachael Colclough said: ‘Pulmonary rehabilitation is an integral part of the management of long-term respiratory conditions and should be offered to all patients who would benefit.’ Ms Colclough referred to the Royal College of Physicians’ national COPD audit and its recommendation that more patients need to join rehab programmes. ‘As respiratory physiotherapists, we need to provide the core quality standards of pulmonary rehabilitation, as supported by the evidence base, while opening up the service to patients who would not ordinarily have engaged with it.

‘The ACPRC welcomes the development of pioneering projects such as this, which not only improve patient care but also showcase the important role respiratory physiotherapists play in developing the future of pulmonary rehabilitation.’