The pinnacle of practice: meet some of the Glasgow games physios

As host nation for the forthcoming Commonwealth Games, Scotland picks seven sports to showcase. Jennifer Trueland profiles some of the physios who will keep the athletes in peak condition. 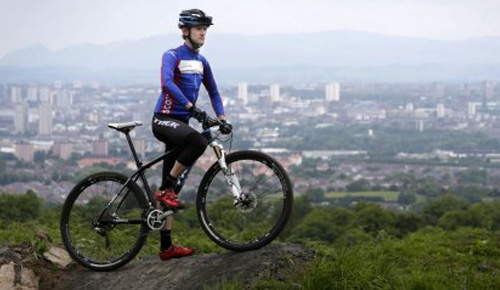 With its wide-open spaces and impressive topography, Scotland is a natural venue for mountain biking. So perhaps that’s why it will be part of the seven ‘non-core’ sports which will form part of the Commonwealth Games in Glasgow.

As the host nation, Scotland can choose seven sports from a menu of options outside the usual run of events in Commonwealth Games. Cycling – including mountain biking – is one; the others are gymnastics, judo, wrestling, triathlon, table tennis and shooting.

These will join the 10 core sports (aquatics, athletics, badminton, bowls, boxing, hockey, netball, rugby Sevens, squash and weightlifting) in the games which start on 23 July and run until 3 August.

According to David Brandie, lead physiotherapist for cycling with the Sportscotland Institute of Sport, who will be working with Team Scotland at Glasgow 2014, the mountain biking will be an exciting event – and Scotland should do rather well at it.

‘We have some of the top mountain bikers in the UK,’ he smiles, conceding that this might have been a factor in the decision to select it.  He and colleagues are working with the riders to ensure they are physically in the best possible shape, optimising the biomechanics and working with the strength and conditioning team to get them to peak fitness. ‘It’s a demanding sport, and we’ll continue to tweak until the event,’ he says. ‘We’ll also deal with any injuries.’

A keen cyclist himself, Mr Brandie enthuses about the new, specially designed mountain-biking course at the scenic Cathkin Braes on the outskirts of Glasgow. ‘It includes uphills and downhills and some quite technical rocky tracks,’ he says. ‘It should be fantastic.’

Track cyclists will also have superb facilities at the newly-built Sir Chris Hoy Velodrome in Glasgow’s East End. Sir Chris is not competing at the games, but is a Glasgow 2014 ambassador and continues to be a great supporter of Scottish and British cycling, says Mr Brandie.

Triathlon is another sport in which Team Scotland is hoping to excel – and another which makes use of Scotland’s natural advantages. The venue, Strathclyde Country Park, boasts 400 hectares of woodland, park and wetland – all very close to the city of Glasgow.

Maggie Bush is lead physiotherapist for triathlon and for table tennis – a combination that owes more to the timetable of the games than anything else.

‘Triathlon is finished by day three, and, as I’ll be accredited, it made sense for me to lead on table tennis too,’ she says. ‘I’m preparing for it by attending training sessions and talking to coaches and to our lead on table tennis at the Sports Institute of Scotland. So far I’m very impressed – these guys really do move quickly!’

Triathlon is clearly her passion, however, and she points out that the games will be of particular interest to other fans of the sport. ‘The exciting thing is that on day one, we have the full Olympic distance triathlon, with up to six athletes from each country.  Then three days later we have the relay event – it’s the first time that there’s been a relay triathlon in a multi-sports games, but it’ll be happening again at the Olympics in Rio.’

Judo a ‘flagship sport’ for Scotland

The super sprint triathlon relay will involve teams of four – two men, two women – who will each complete the three elements (a 250m swim, 6k cycle ride and 1,600m run). It should be a speedy and exciting event.

Ms Bush has been lead physiotherapist for Scottish triathlon for the past three years, and clearly revels in every moment. ‘It’s fabby – a real dream job,’ she says.

‘We’ve got some phenomenal athletes, including two 19 year olds (Marc Austin and Grant Sheldon) who finished second and third in last year’s World Junior Triathlon, and there’s another guy who has been training with the Brownlee brothers (England’s triathlon stars, Jonathan and Alistair) in Leeds.

‘It’s great that we have a few potentials!’ she adds.

Oliver Davies is lead physiotherapist for judo and disability sport at the games, and is looking forward to both. Judo hasn’t been included in the Commonwealth Games since Manchester in 2002, and won’t be part of the 2018 games in the Gold Coast games in Australia, so Glasgow will be particularly important for lovers of the sport.

‘It’s one of the flagship sports for Scotland,’ explains Mr Davies, who has worked in it for the last four years. ‘Our target for the Commonwealth Games is six medals minimum and we should be on the podium for quite a lot of the weight categories.’

Mr Davies is hoping that some of the team’s hard work around injury prevention will help make a contribution to performance at the games.

In April, he presented a paper at the International Olympic Committee’s world conference on prevention of injury and illness in sport in Monaco.

This study showed that a multidisciplinary approach to injury prevention, carried out with elite judo performers in Scotland, significantly decreased shoulder and knee injuries.

The performers embraced the programme, he says, recognising that it was to their advantage to prevent injury.

As lead for wrestling and badminton, Craig More is looking forward to a busy Glasgow 2014 – indeed, he’s all the more excited about it because it will be his first Commonwealth Games. ‘I was unable to go to Delhi for unavoidable family reasons – the birth of my first son,’ he laughs. ‘It wasn’t really an option!

So I’m totally excited about it this time, especially as it’s the home games.’

Mr More leads on both sports within the Sportscotland Institute for Sport, badminton for the last seven years, and wrestling for four.

‘We’ve got medal hopefuls in both sports, but I don’t want to curse it by naming names,’ he says. ‘I do have high hopes, though.’

Each sport places different demands on the body – and on the physiotherapist, he says. ‘Wrestling is a combat sport, so there’s always a high risk of injury. We’ve been trying to work in a more proactive way to prevent injury by analysing the sport and looking at the trends, and implementing a programme to address them.’

There was a significant risk of shoulder injury, for example, which has been virtually eradicated by the prevention programme, he adds. This includes looking at warm-ups and at strength and conditioning.

Mr More is hopeful that with input from the multidisciplinary team, and with the athletes themselves, that it will all come together to make a great games.

Hardly surprisingly, badminton has a different injury pattern, he says, with jumping leading to tendon issues.  He has adopted a similar strategy to tackle it, however, by analysing the problems and implementing a specific programme to deal with them.

He’s delighted that both sports have been chosen for Glasgow 2014. ‘They are sports which are supported by the institute and we know they have Commonwealth Games potential,’ he says. ‘You’re always working as if you’re going to be there in any case, but I can’t quite believe it’s almost happening.’

But what of the sports that won’t be there? There are two major changes since Delhi. Despite Scotland’s recent successes in tennis (think Andy Murray), the sport is off the menu, as is archery.

At the games themselves, however, the lead physiotherapists might find themselves treating athletes from any discipline, which is one of the joys and the challenges of multi-sport events.  Ms Bush and Mr More are also leads for Scotland’s preparation camp in Stirling ahead of the games.

‘We’re all really looking forward to it,’ enthuses Ms Bush. ‘It should be a fantastic games.’ fl