Francis McMonagle plays a central role in a service that treats survivors of Northern Ireland’s Troubles in a holistic way. Gary Henson reports. 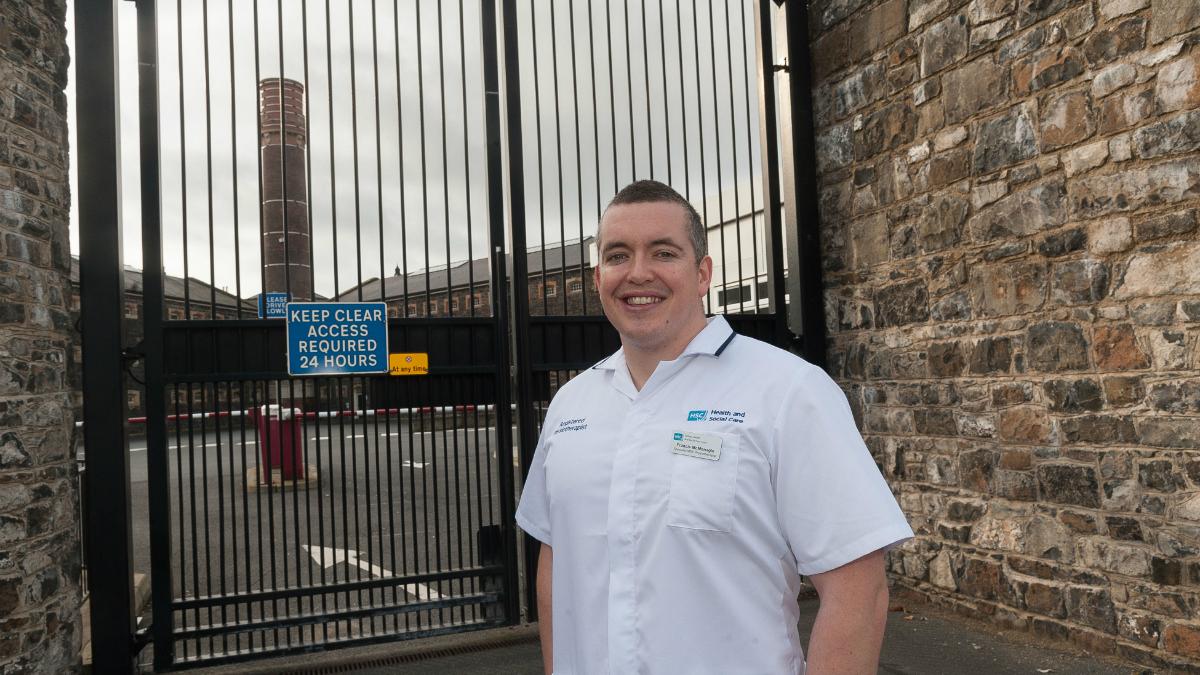 Is there a link between traumatic events and persistent pain? Francis McMonagle thinks so. He is based at Mater Infirmorum, an acute hospital in Belfast at the frontline in treating casualties of three decades of political conflict, known as the Troubles.

One day a week, he works in Bridge of Hope, a pioneering community physiotherapy project to help people whose chronic pain is linked to the events of that era. Bridge of Hope, whose pilot study Mr McMonagle helped to develop, has been extremely successful. Part of a wider regeneration scheme, the pilot project ran for nine months and is now being continued.

Irene Sherry, the project’s head of victims and mental health services, said: ‘The pilot worked because it was in the heart of the community, in north Belfast, where nearly 600 people lost their lives during the conflict. It was also somewhere people felt very safe and, alongside that, felt able to engage and talk with other practitioners with what other help they could get.’
Mr McMonagle’s contribution was recognised when he was named overall winner of the Northern Ireland’s 2017 Advancing Healthcare Awards. His work is also up for the UK-wide equivalent in the spring. ‘Part of the reason we entered was to get a wee bit of awareness out there and to promote the role of physiotherapy in mental health,’ Mr McMonagle said. ‘We have a lot to offer and we’re not really utilising our skills to the maximum, given the amount of evidence for the benefits of exercise for mental health issues.’ 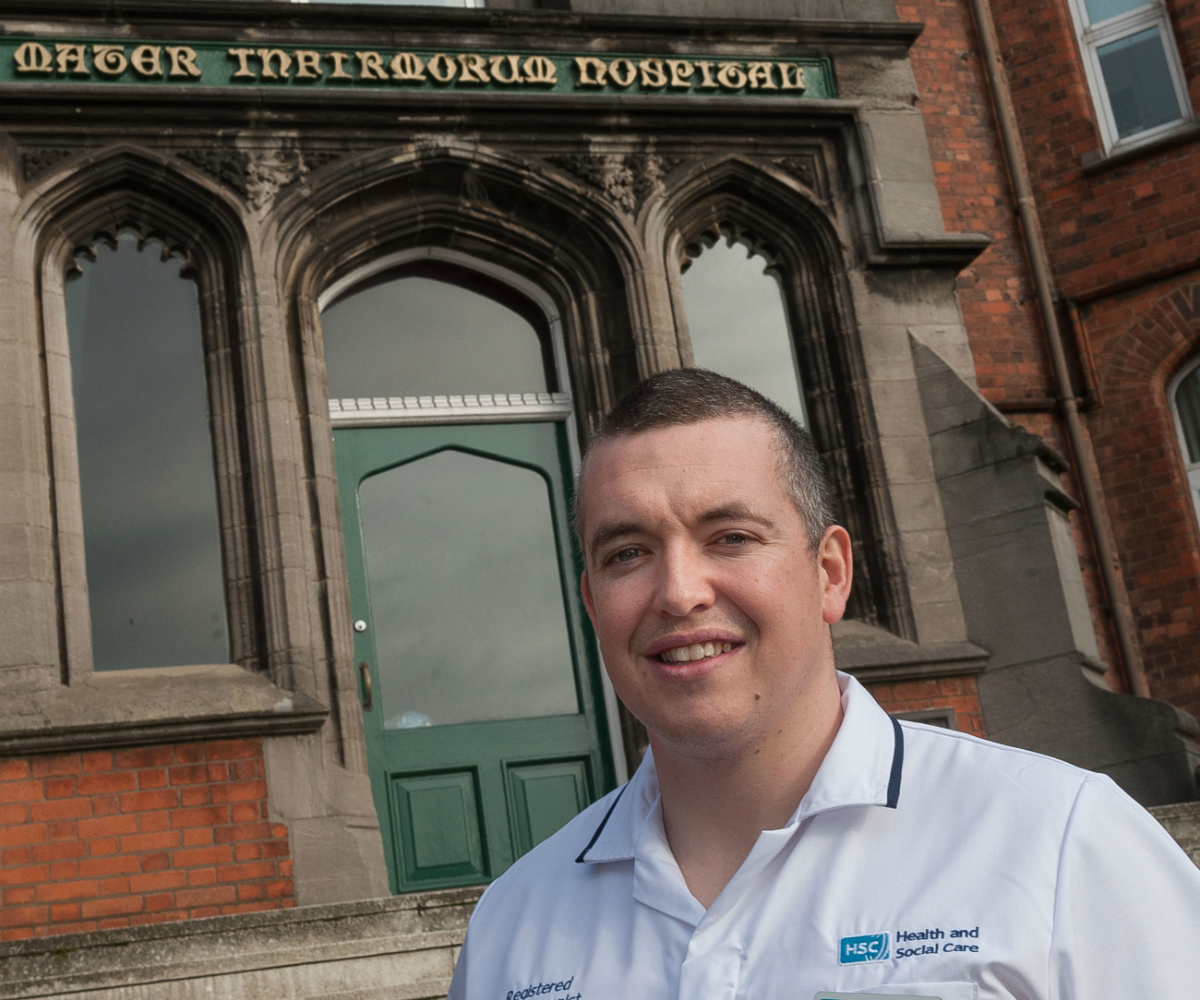 Officially, 3,725 people were killed during the Troubles, lasting from 1968-1998. In addition, 47,541 people were injured. However, a study commissioned by the WAVE Trauma Centre suggested that the true number injured approached 100,000. The toll includes lost limbs, impaired or lost hearing and sight, ‘invisible’ injuries such as embedded shrapnel and psychological trauma as the result of shootings and bombings.
‘It is a massive problem in north and west Belfast – the areas most significantly impacted by the Troubles,’ Mr McMonagle said. While the Troubles have largely settled and the impact on people’s health is likely to level, the conflict’s legacy is likely to go on for another couple of generations.
A 2014 study by the Patient Client Council found that of 2,500 people in Northern Ireland with chronic pain, 88 per cent said it played a negative role in their mental health. As well as psychological disorders, trauma victims can develop arthritis, musculoskeletal pain, asthma and stomach ulcers.
‘Mental health problems can lead to chronic pain and vice versa,’ Mr McMonagle said. ‘If you are in chronic pain for a long time it is only a matter of time before you develop mental health issues.’
Childhood trauma’s links to ill health in later life is often under estimated, he said. ‘I hope to use the awards to raise awareness and make a difference.’

As well as being named overall winner at last year’s Advancing Healthcare Awards in Belfast, Bridge of Hope also triumphed in the innovation and creativity category. Set up as a health and wellbeing service by Ashton Community Trust, at a cost of £13,000, the pilot study offered 10 months of treatment to about 100 people. As well as traditional physiotherapy techniques, staff offered tai chi and mindfulness meditation to help people manage their mental health problems as well as physical symptoms.
The judges said that the project showed that excellent care does not need to be complex, describing it as an excellent example of how to challenge the status quo. ‘What we particularly like to see is making sure that physiotherapy forms a pivotal role because we know it works,’ said Mr McMonagle.
The project treated victims from all sides of the community, who had been impacted by the conflict in many different ways. It allowed individuals with permanent persistent pain, who were physically or psychologically affected by the conflict, to self-refer or be referred by friends, family or health professionals. ‘One of the big things we were trying to do with the project is raise awareness of the link between psychological trauma and chronic pain,’ said Mr McMonagle.
Hour-long appointments up to a maximum of 10 sessions made the difference, he said. ‘In the long term, it’s going to be cost-saving as there’s less need for onward referral and a reduction in medication. A lot of things we’re trying to do in terms of treatment is just calming the nervous system.’

The Bloody Friday events in Belfast in 1972 killed nine people and injured 130. Philip Gault, aged nine, was out shopping with his mother when a car, containing an incendiary device, blew up outside the bank on Limestone Road. He survived but was badly hurt. 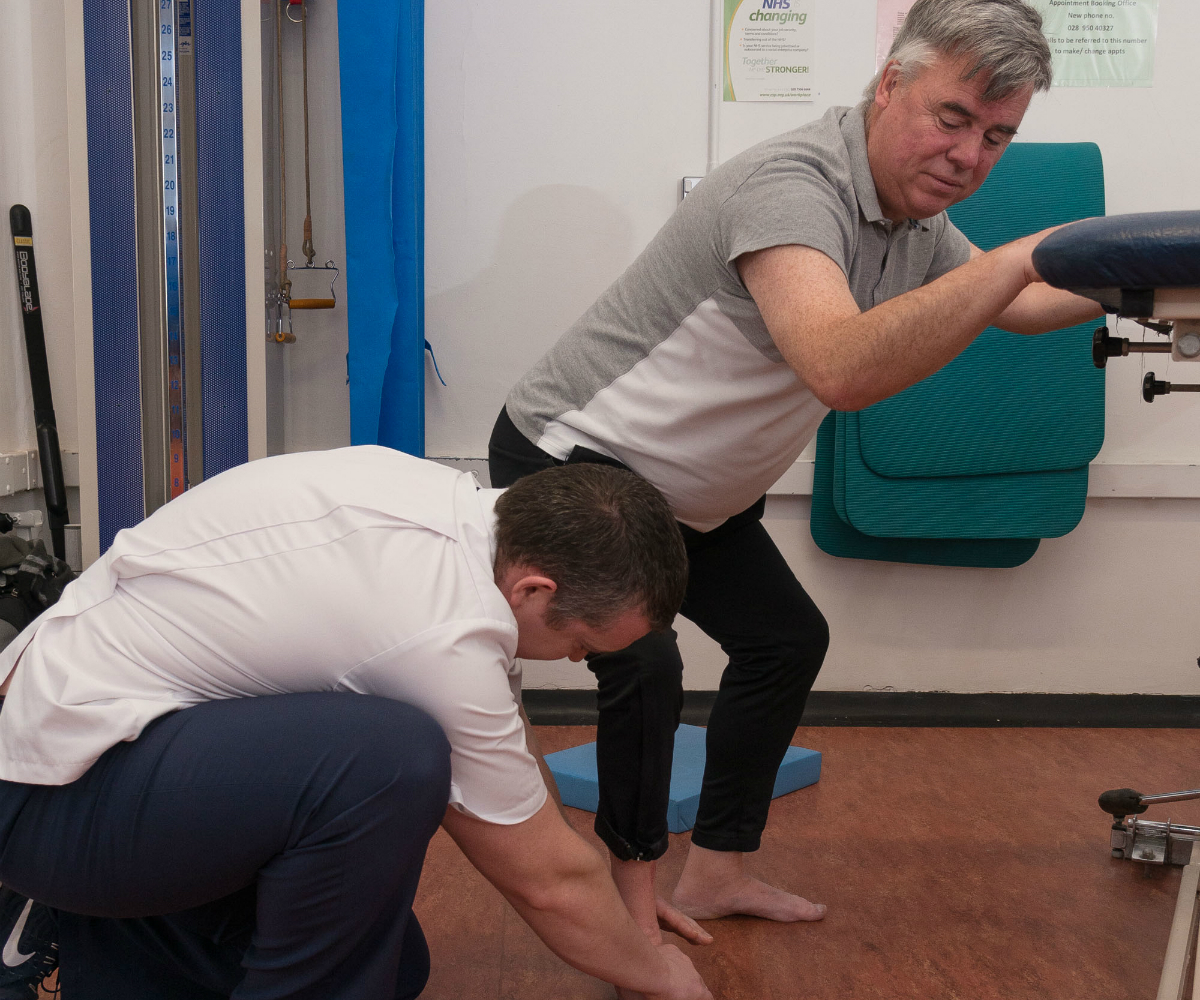 ‘I was thrown up in the air,’ Mr Gault said. ‘My leg was severely cut at the back of the knee. It was hanging on by a few sinews. The surgeon said he’d try and save it but the priority was to save my life.’

Although microsurgery was in its infancy then, Mr Gault’s leg was saved. ‘My leg was still attached but not functioning as it should, with limited movement. He had several operations up until the age of 16 to try to stabilise it. ‘From then on it was down to post-treatment.’

He had physiotherapy to get his remaining muscles to function, with an emphasis on muscle strengthening elsewhere in the body. ‘They would strap wee sandbags on both legs then I’d lie on my back and do 100 lifts. Walk between the parallel bars – “heel to toe” was the mantra. It was excruciating.’

Mr Gault spoke of being ‘cut adrift’ at age 19, ‘You’re all alone.’ His body adapted to the pain in his leg over several decades. Then, in his early 40s, it escalated to joint and back pain, his gait was off-centre and his ankle started to hurt.‘But physiotherapy on the NHS then was about immediate trauma rather than looking at the whole person, like you would, say, with car maintenance. It didn’t happen.’

Hearing about the Bridge of Hope pilot, he ‘jumped at the chance’ to get on to it. ‘I made more progress. Francis looked at the injury, the degeneration and what was practical – such as a lot of balance and strengthening around the ankle. But physiotherapy and mindfulness going together – that was a hard one to sell to me. But at the end of the sessions, I totally understood it.’

Mr Gault learned to relax during the exercises and said they had caused him to become stressed. He recalled ‘simplistic’ messages from physios in the 1970s and ‘being sent home with exercises which weren’t easily communicated’

Thankfully, things have changed.‘Communication between me and the physio is very clear and that helps,’ said Mr Gault. ‘Back in the day, it was drilled into you that you had to do this exercise or that, for the whole body. Now there’s a different emphasis, on my ankle and foot.  ‘And if you get a good night’s sleep, your mind is right and you approach things with a different attitude. You can’t forget an event of that enormity. I don’t think about it every day but when you feel an episode of pain you do think back to when and how it happened.’

On 12 June 1973, a 500lb bomb went off on Railway Road, Coleraine, killing six bystanders. The day before, social worker Margaret had been on that spot. ‘It left the town devastated. People were afraid to go out, to shop.’ 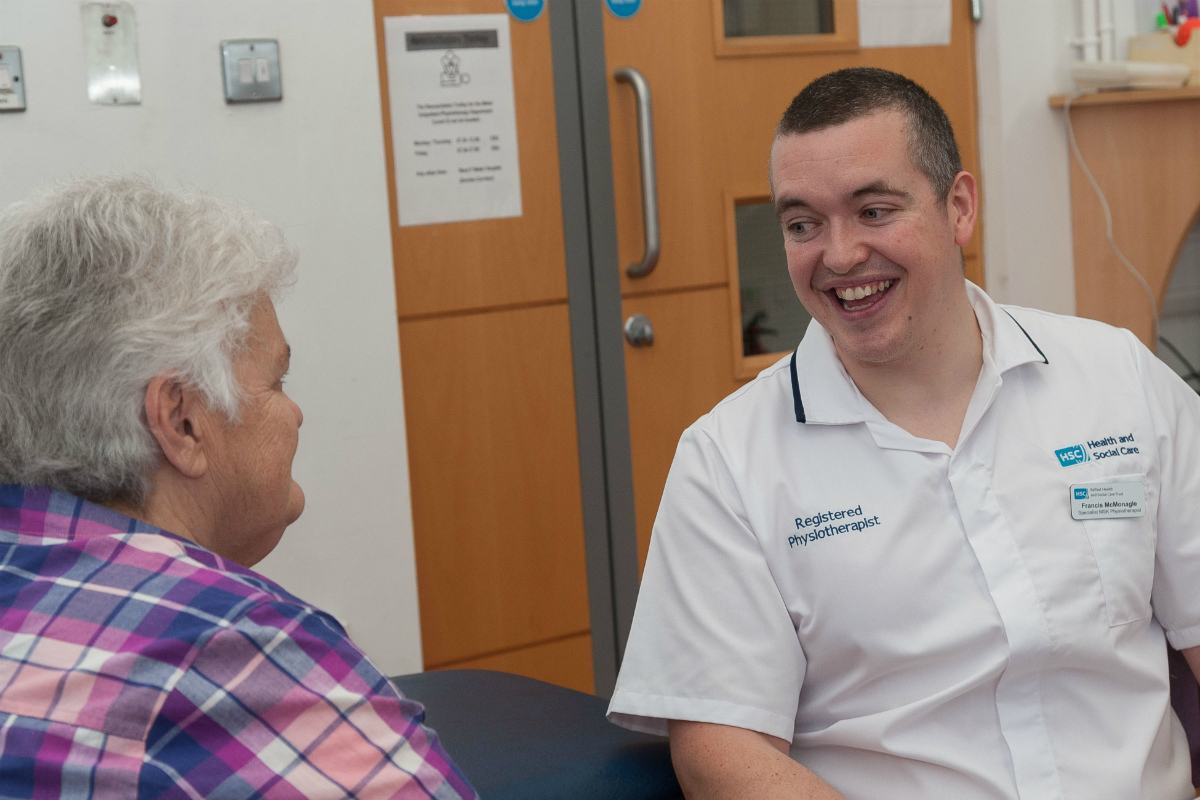 Later on, as a counsellor with the charity Fibromyalgia Support Northern Ireland, Margaret dealt with many people whose condition could be related back to their experience of the Troubles. One client had been stopped outside a hospital, where he worked, by two armed men who demanded his keys. He refused and got away but the violent encounter left him scarred.
And, she recalls, ‘I saw women whose husbands had been in a sect [republican or loyalist] and these women would have had experience of living with these people and it having an adverse effect.’
As well as a being a patient at Bridge of Hope, Margaret also received rehab at the Mater Infirmorum from Mr McMonagle after breaking an ankle. She also has fibromyalgia, which can start when the body has some sort of trauma, she explained. ‘The pain is with you 24/7.’
Her previous experience of physiotherapy after a dislocated shoulder injury was not positive. ‘I felt like I was just being told what to do without needing to understand why. I wasn’t keen on the idea of physiotherapy, until now.’
Margaret has a lower tolerance to exercise due to the fibromyalgia. ‘When I arrived I was down and depressed with the pain – and the fear of coming here. We talked about what I was going through. I’d envisaged Francis asking me to do extreme exercise beyond my ability. Oh, how wrong I was.’
She said Bridge of Hope offered ‘a new concept in physiotherapy’. ‘Francis has given me back a good part of who I am. I’m not a woman to sit in the corner. This has been a life-changer.’  Margaret has asked that her full name be withheld.