Physio in prison: The inside story 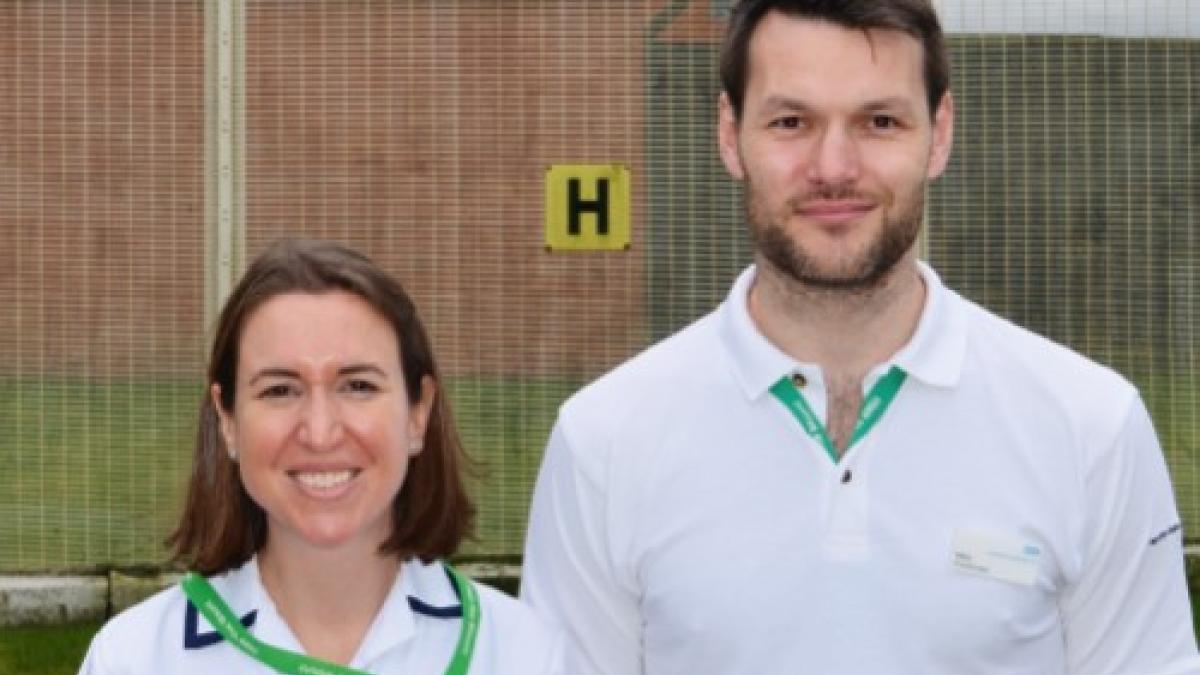 At first glance, Mike Orr and Alex Sedgwick’s clinic room looks just like that of any other musculoskeletal (MSK) physio.  But there are a few subtle differences.
Situated halfway down one wall is a round, green alarm button.  Reflex hammers and other potentially harmful equipment are locked away out of sight, and the view outside the window includes a high perimeter fence, topped with coiled and spiralling razor wire.
The band 7 MSK physiotherapists work at The Mount, a men’s prison, close to the village of Bovingdon on the edge of the Chilterns.  It has a category C status, meaning prisoners are deemed unlikely to make an escape bid.
The local NHS trust, Hertfordshire Community, recruited the physios after winning the tender to provide the prison’s healthcare in 2014.  The trust allocated extra funding to the prison’s healthcare team – which already included doctors, dentists, specialist nurses and visiting health professionals – and created two new physiotherapy roles.
‘As well as providing physio clinics they wanted us to have an input into pain management, work more closely with gym staff, and develop the whole pathway of the service,’ Mr Orr explains.  Since taking up their posts two years ago, the pair have radically reduced waiting times, reshaped the physiotherapy pathway for prisoners and supported a pain management clinic.  The phyios’ input was recognised by them winning a 2016 NHS England award for ‘Best Healthcare Professional’ in the Anglia region.
Between them, the physiotherapists spend 22 hours a week at the prison, which can take 1,028 men. Ms Sedgewick also works part time at St Albans City Hospital and Mr Orr at Hemel Hempstead Hospital.
Prisoners with a health concern have to submit an application for healthcare. ‘And if their application has a reference to a MSK condition, they are placed into one of our triage clinics,’ says Mr Orr.

The clinics run in the healthcare department, which is situated away from the cellblocks and above a separation unit for at-risk or isolated patients.  ‘We need to ensure all our treatments consider the security of the prison,’ says Mr Orr. ‘For example, we needed special permission to use acupuncture as the needles could be considered a weapon, so we have to keep them locked away.’
As far as possible, the physios aim to offer the same treatments that would be available in the community, says Ms Sedgwick. ‘But there are some restrictions, like if you give out a wrist splint you have to take out the metal and we’re not allowed to give out Therabands as they could be used as ligatures.’
The physios’ efforts have seen waiting times plummet. Once a 16-week wait to see a physiotherapist was the norm but now prisoners are seen within two to three weeks.  If a course of physiotherapy is deemed necessary, this starts within six weeks.  The reduction was achieved by introducing a weekly MSK assessment clinic where up to nine patients are seen for 15 minutes each.  This allows the physios to screen patients.
‘Many of the men we see can be discharged in one 15-minute session with advice about moving and exercising more and reassurance that it’s nothing serious,’ explains Mr Orr. ‘Previously, some people waited 10 to 12 weeks – only to be told to exercise more.  Now they go away, make an effort to move more, make better use of the gym and find they are able to manage it that way.  So having that first contact can be very effective.’
The physios’ emphasis on providing education on the importance of exercise is in line with last year’s National Institute for Health and Care Excellence (NICE) guidance, which said prisoners should be given information about the benefits of exercise.  Ms Sedgwick explains that the prisoners have allocated movement ‘windows’ during the day, and are given yard time and opportunities to visit the gym.  But they also have a lock-up period, from 6pm to 8am, during which little movement may take place. ‘A lot of them just don’t realise how detrimental it can be to lie on a bed for 12 hours,’ she says. ‘So we give them some basic advice on moving and we have some general exercise sheets that they can do while lying on their beds.’
An activity and referral audit, completed over nine-months, found that the physios had an average number of four contacts with each patient referred to them.  Of these, 30 per cent had lumbar spine complaints, 17 per cent had shoulder issues and almost 19 per cent had knee problems.  Mr Orr says the audit results show that, despite the particular conditions of prison life, the prevalence of conditions such as mechanical back pain among prisoners mirrors the pattern seen in the population at large. ‘I’m sure there are lots of people who get home from work at 6pm and sit on the sofa all evening and don’t leave the house till 8am the next morning – so this pattern exists in the population outside prisons as well,’ he says.

As well as providing the MSK assessment clinics and treatment sessions, the physios also play a key role in a pain management group, collaborating with a GP, a pharmacist and specialist substance-misuse nurses. ‘Our MSK assessments help to inform the group on whether patients are in neuropathic pain or not,’ says Mr Orr. He explains that painkillers, such as pregabalin, tramadol and gabapentin, are highly sought after by some prisoners. ‘Many of these drugs have euphoric side-effects so there are people who want to be on them so they can use them for trade.’
Prisoners who have previously been prescribed pain medication are sent for follow-up assessments with the physios, who talk to them about their symptoms and conduct some objective tests. ‘Some are on them appropriately, but at times it’s blindingly obvious they don’t need medication,’ says Mr Orr.  Ms Sedgewick says that normally, in this type of assessment, a patient’s subjective experience would hold great weight, but in this scenario, the physios have to rely more on objective testing and observations.  ‘I’ve had to review CCTV footage of someone who said they can’t do something, and seen them on the wing walking without their crutch and going up and down the stairs as if it was nothing,’ she says.  ‘It’s not pleasant having to do that, but that’s the reality of doing an assessment in this environment and that can make it more challenging.’

A great place to work

Looking forward, the physios are keen to implement more plans that could improve their service further. Ms Sedgwick is currently studying an MSK injection therapy module at the University of Hertfordshire and Mr Orr plans to enrol on the same course next year.  Upon qualification, the physios will be able to inject steroids and local anaesthetics, for example, without supervision.  This will reduce the need for outside appointments, they say.
Working in a prison may sound intimidating, says Ms Sedgwick, but in the two years since they started the physios have had very few concerns about their safety. ‘People are often surprised that we work in the clinic room alone with prisoners,’ she says.
‘But I’ve never even come close to having to consider pushing the alarm.  Most of the time appointments are very good-natured and we often have a good laugh and chat.’
Mr Orr agrees: ‘There is an assumption that all prisoners are unstable, dangerous characters. But not all crime is violent. Many are here for things like fraud and banking crime.  Most are just people in pain, with the same physical problems that anyone else would have.’ The prison is ‘a great place to work’ and provides a broader view of life, says Ms Sedgwick.
Mr Orr adds that working at the prison has caused him to reflect on his own liberty and the things that we all take for granted outside the prison perimeter. ‘One prisoner saw a car out of my clinic window last week and was excited as he said it had been ages since he’d seen one,’ he says. ‘It really can be a very isolating place to live.’ fl

NICE guidance on physical health of people in prison

A UK government Prisons and Courts Bill sets out a new framework for prisons. It says they should reform and rehabilitate offenders, as well as punish those who have committed crimes.
Last year’s Public Health England review of NHS healthcare in prisons called for policies that promote health and environments that actively support health.
A report from the Howard League for Penal Reform on preventing suicides calls for a culture shift in prisons: one centred on ‘recovery, wellbeing and rehabilitation’.