Physiotherapy research is flourishing in Northern Ireland. Janet Wright presents a snapshot of some leading papers, with the authors’ comments on their impact. 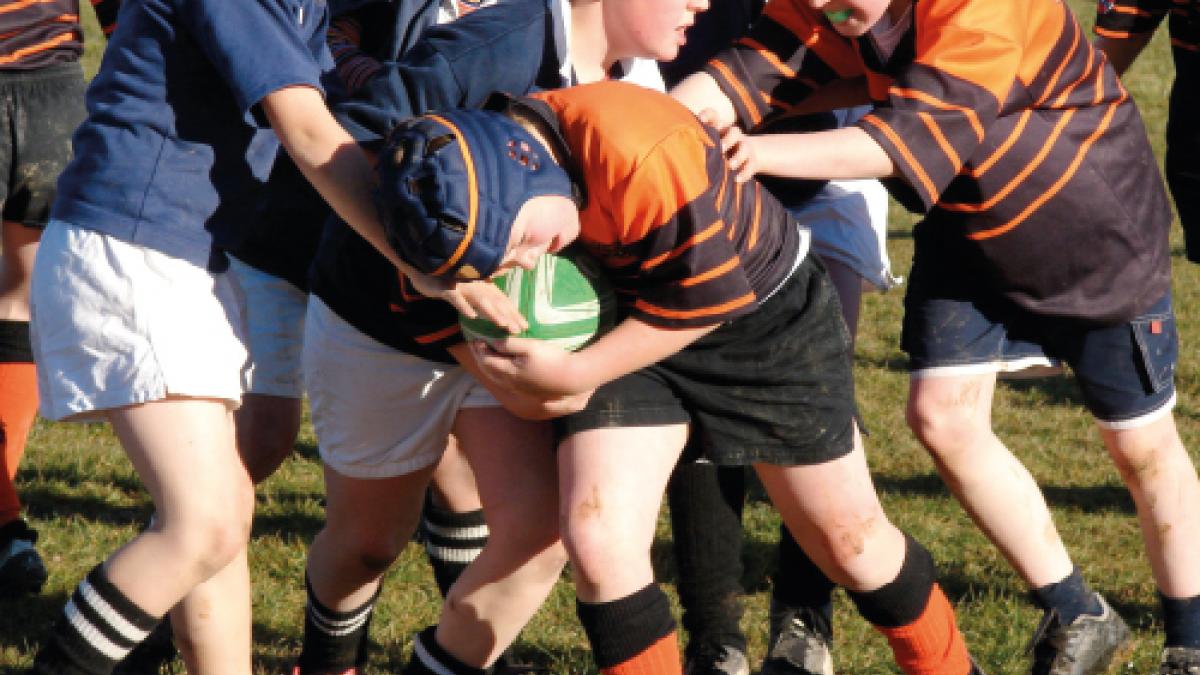 Head or shoulder guards have little effect in reducing rugby injuries, a collaboration between Ulster University and the Rugby Injury Surveillance Ulster Schools (RISUS) group has revealed.
The three-year study, funded by the Mitre Trust charity, was the first to explore types and causes of injuries in schoolboy rugby across Northern Ireland. It included 825 teenaged players in 28 grammar schools.
Of 426 injuries recorded in one season, 31.2 per cent involved ligament damage and 15.3 per cent muscle damage. Head, shoulder and knee were the most common sites, and heavier players who undertook regular weight training had an increased risk.
Concussion accounted for 19 per cent of injuries, which the study suggests may reflect improved recognition of this brain injury. Players were treated, and made a graduated return to play, in accordance with current guidelines.  Archbold HAP et al. RISUS study: Rugby Injury Surveillance in Ulster Schools, British Journal of Sports Medicine 2016.
Head author Chris Bleakley comments: ‘The results of this study will allow us to develop recommendations for future preventative strategies such as tackling techniques and training.
‘The aim is to make the game as safe as possible while still maintaining the spirit of this hugely popular sport.’

A Northern Ireland study showing how physiotherapy exercises relieve a painful and restrictive shoulder condition has been widely cited by other researchers (see Frontline, 5 September 2012).
Catherine Hanratty, of Ulster University, Jordanstown, and colleagues reviewed research into subacromial impingement syndrome.
They found strong evidence that exercises reduce pain and improve function in the short term. They also found moderate evidence of short-term improvement in mental well-being and long-term improvement in function. Hanratty CE et al. The Effectiveness of Physiotherapy Exercises in Subacromial Impingement Syndrome: A Systematic Review and Meta-Analysis, Seminars in Arthritis & Rheumatism 2012; 42: 297–316.
‘This was the first systematic review which attempted to quantify the magnitude of the treatment effect of exercise across outcomes such as pain, patient reported function, strength and quality of life,’ say Dr Hanratty and colleagues.
‘It was the largest review conducted to date at the time of publication. It has been cited 75 times since publication, not only in shoulder-related articles but also in other disease areas.’

Buddies keep each other on the ball

Social networks can play an important role in programmes encouraging people to change their behaviour, researchers have found.
Ruth Hunter, of Queen’s University Belfast, and colleagues investigated the informal networks that grew up among participants in a programme aimed at increasing physical activity.
They noted, for example, that people who exercised in pairs or groups kept up higher levels of activity than those who exercised alone.
Interventions aimed at changing behaviour should take account of how participants interact and how these interactions affect outcomes, the team recommend. Hunter RF et al. “Hidden” Social Networks in Behaviour Change Interventions, American Journal of Public Health 2015; 105: 513-516.
‘To our knowledge, this is the first study to provide explicit evidence of social networks’ role in behaviour-change interventions,’ say the authors. ‘Harnessing and using such networks could help promote and maintain behaviour change.’
Dr Hunter has been awarded a NIHR Career Development Fellowship to continue this research. (See Frontline 15 April 2015)

Ground-breaking work led by Northern Ireland researchers revealed a better way to measure lung function in people with the life-threatening lung disease bronchiectasis.
Researchers including Judy Bradley and Katherine O’Neill at Ulster University and Queen’s University Belfast worked with an international team.
Bronchiectasis is an abnormally widening of the airways, leading to excessive production of mucus and vulnerability to chest infections.
The team showed that the lung clearance index (LCI) was more sensitive than the commonly used spirometry in detecting abnormalities, confirmed by CT scans. Rowan SA et al. Lung Clearance Index Is a Repeatable and Sensitive Indicator of Radiological Changes in Bronchiectasis, American Journal of Respiratory and Critical Care Medicine 2014; 189: 586-592.
‘This paper is significant as, at time of publication, the value of the LCI had not been explored in bronchiectasis,’ Professor Bradley told Frontline.
‘Reviews had confirmed that spirometry was of limited value as an outcome measure. This study provides clear justification for considering LCI as an outcome measure in future bronchiectasis trials.’

Readers are talking about walking

A study showing that walking could relieve chronic musculoskeletal pain aroused an unusual amount of interest.
Colleagues from Ulster University, led by Professor Suzanne McDonough, found that walking-based exercise could cause significant improvements in pain and function, at least in the short term.
They reviewed 26 studies including 2,384 participants with chronic low back pain, osteoarthritis or fibromyalgia. Walkers were compared with control groups who either took other forms of exercise or didn’t exercise.
‘Walking can be recommended as an effective form of exercise or activity for individuals with chronic musculoskeletal pain, but should be supplemented with strategies aimed at maintaining participation,’ the research authors conclude. O’Connor SR et al. Walking Exercise for Chronic Musculoskeletal Pain: Systematic Review and Meta-Analysis, Archives of Physical Medicine and Rehabilitation 2014; 96: 724–734.
The Altmetric attention score, which calculates how much coverage a published study receives in the wider media (giving a higher score to a newspaper report than a tweet, for example) put the study in the top five per cent of papers published in Archives of Physical Medicine and Rehabilitation that year, Dr O’Connor and colleagues report.

Kathy Hetherington and colleagues at Belfast City hospital and Queen’s University Belfast won the 2016 Northern Ireland Healthcare Award for asthma project of the year. They used the INhaler Compliance Assessment (INCA) device, which records inhaler use for computer analysis. INCA helps patients avoid unnecessarily increasing their medication, by improving the technique and timing of their inhaler use.
The Get Sporty physiotherapy initiative, led by Stephanie Coulter and Alison Mounstephen, reached the finals of the NI Advancing Healthcare awards 2016. It encouraged schoolchildren with a physical disability to take part in circuit groups, Pilates classes and after-school cycling, and to try new sports in a one-week summer scheme.
Kevin Campbell and physical activity co-ordinator Nicola Arbuckle, of the Northern Health and Social Care Trust, reached the finals of the NI Advancing Healthcare awards 2016 with their popular cancer rehabilitation physical activity programme. This helped participants reduce their fatigue, anxiety and depression while increasing self-esteem.

‘High-quality research with global impact, involving physios, is being carried out here in NI,’ says Katherine O’Neill, research and development committee representative on the CSP Northern Ireland Board and co-leader of the Council for Allied Health Professions NI hub.

Dr O’Neill encourages other physiotherapists in the region to look at the research career pathways that are open to them.

Research criteria: what the experts say

Prof Suzanne McDonough, lead of the Centre for Health and Rehabilitation Technologies at Ulster University:

‘Physiotherapy research at Ulster University has a long-standing reputation for excellent research with a strong clinical focus centred on the physical needs of people with chronic conditions. We were delighted with the results from the most recent research excellence framework (REF 2014) exercise, where 96 per cent of our research was rated as “internationally excellent or world leading”.’

‘PhD training programmes provide physiotherapists with the opportunity to gain advanced research skills and be competitive for the increasing diversity of research posts open to allied health professionals in NI. I believe further investment is needed in a structured research career pathway, particularly with regard to postdoctoral fellowship opportunities, to optimise career opportunities for physiotherapists in NI and ensure we retain this skilled workforce.’

Dr Fidelma Moran, chair of the CSP NI board:

‘Planning for the future has been a focus of recent board activity, with alignment of the CSP Strategic Objectives (2017 – 2020) with the NI Executive Draft Programme for Government Framework (2016-2021). Research has been identified as one of the drivers for professional development, along with the promotion of evidence-based practice.’