A perfect fit: occupational health is getting NHS staff back to work safely

An award-winning link-up with occupational health is getting NHS staff back to work safely. Janet Wright reports. 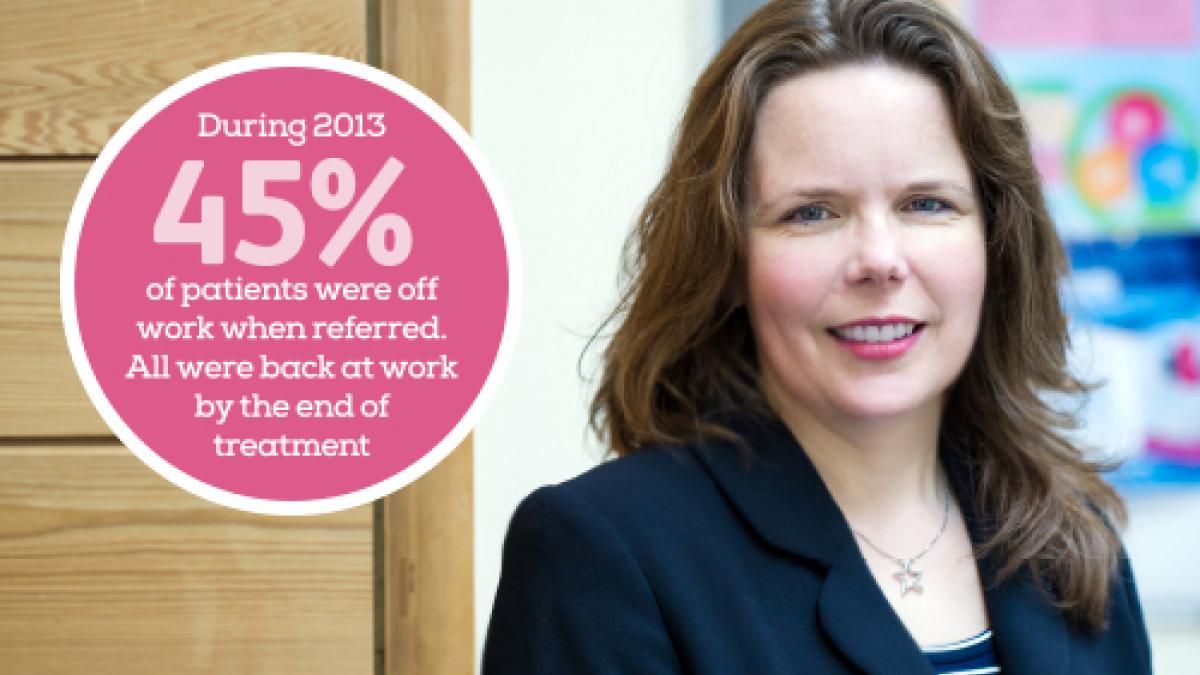 For physio Heather Watson, working in a community trust’s occupational health (OH) team was a chance to help injured NHS staff avoid long-term disability. Ms Watson’s meticulously gathered data proves that the new service gets staff back to work safely while saving £5 for every £1 it costs. And feedback from staff shows that her efforts are appreciated.
Ms Watson’s success was recognised by the CSP in December, when the service she set up won an excellence award for promoting activity and healthy lifestyles. The job Ms Watson took in 2010 was for a physiotherapist to work in Derbyshire Community Health Services NHS Trust’s OH team. ‘It looked interesting and I saw it was open to possibilities,’ she says.
The system she set up includes a biopsychosocial approach to assessment – looking not only at physical factors but also at the beliefs and circumstances that could be impeding a patient’s recovery. That is followed by treatment, referring on for other professional input if necessary, and – most importantly – job-specific rehabilitation.
Ms Watson emphasises the importance of a stepped approach. ‘We want the right service at the right time in the right place for the individual. If we provide someone with a bespoke full-on multidisciplinary approach when they don’t need it, it’s not effective.’
But the job presented challenges. One of Ms Watson’s first tasks was to explain the new service to its potential clients. ‘We changed the name of what we do, as the OH admin team were sending out letters asking people to come and see the physio in OH and people were saying they were already seeing the physio where they were based. We had to distinguish our service from outpatients so they would come to us as well.’

Renaming it the MSK Fitness for Work service also eased some staff members’ fears about occupational health. Some people perceived OH as the place to go when it was too late to do anything else,’ says Ms Watson. ‘They thought if you were called to OH, the end was nigh and you were going to lose your job. We had to do a lot of PR!’
The size of the community trust was another obstacle. Covering a large part of Derbyshire, its sites are up to 90 minutes’ drive apart and the OH team is based in Dronfield in the far north east of the county. A three-hour round trip didn’t make sense for either a physio or a patient. ‘How do you create a service that could be effective across such a big area?’ says Ms Watson, who did a three-day week; the team has never had more than 1.5 full-time equivalent physios. ‘We weren’t going to be able to provide hands-on physio for everyone. Instead, we tapped into outpatient physio services across the county.’

Patients who need hands-on physiotherapy are fast-tracked to their nearest outpatient department. Others might be given advice by phone. But staff struggling with returning to work or staying at work are called in for a more specialist assessment. A 90-minute appointment includes a full physio assessment as well as questionnaires and outcome measures, discussion of the patient’s beliefs and fears, and watching how patients move in order to encourage a wider variety of ways to carry out tasks.
Education is an essential part of the service. ‘Some patients say “I can’t go back to work because it’ll make my back worse”. We need to do a lot of education about that, because it’s not usually true,’ says Ms Watson. ‘One of the biggest things we can do is to help people realise when they aren’t going to be cured, but show them how they can live with their condition and go on working with it. Sometimes we have to change the work, too. But we may have to help them change their beliefs that you can’t work if you have any pain.’

Good communication was also essential from the outset. The team often has to negotiate with managers for patients to make a phased return to work, or take on lighter duties.  When the service started, it was also important to communicate with other physios.
‘We were the only physios in the trust who didn’t work for physiotherapy,’ says Ms Watson. ‘That made communication a bit difficult at times. Our role was very different from an outpatient physio’s, and we had to make sure they knew why a patient was seeing us as well as them. It can be difficult to phone other physios because you’re all in appointments at the same time.’
To start with, the service had no permanent base away from Dronfield – Ms Watson got used to carrying all her forms and equipment around with her when she needed to see patients in other parts of the county. Another challenge was the trust’s move towards a paperless system: she might find herself doing an assessment in a clinic room without an internet socket, or an office with only one network port that someone else was using.
‘Paperless seems a good idea, but it’s not always easy,’ says Ms Watson. ‘In some parts of Derbyshire you can’t even get a mobile phone signal. Our whole assessment procedure is very paper heavy in terms of needing to use questionnaires. We ended up doing assessments on paper and getting them scanned.’
Working for a community trust, the team sees NHS staff working outside hospitals or clinics. Many are community nurses changing leg dressings in patients’ own homes, without much equipment to ease the task. The team gives simple advice such as wearing trousers and kneeling on one knee instead of two so they could swap knees after a while. ‘We ended up doing a community nursing checklist as a bookmark for reminders of how to make the task easier,’ Ms Watson recalls

One hospital maintenance worker said he couldn’t carry his tools and ladders after hurting his back. ‘We have to challenge those beliefs,’ says Ms Watson. ‘Some people think their back is weak after an injury. We say “No it isn’t, but you do have to regain confidence and build up strength”.’
A nurse on a mental health ward, who came in with back pain, needed help in regaining confidence that he could deal with unpredictable behaviour. His rehab included extra training in coping with violence. ‘We always follow up after someone has been back at work two weeks,’ says Ms Watson. ‘If they started on phased return to work, confidence is a big deal. So we’re supporting them if they’re struggling with the process.’
During 2013, 45 per cent of patients were off work sick when they were referred. All were back at work when their treatment ended. The service cost about £48,000 a year and saved an estimated £244,000. ‘It’s quite difficult collecting data,’ Ms Watson admits. ‘We were filling in forms by hand, and at the end of the year we had to go through all the data by hand and work it out.
‘I was dogmatic about the data in the beginning and everyone probably thought I was crazy. But we were able to show what we’d done. We were able to project figures, to say this percentage of reduced absence saved this amount of money.  It’s basic and boring for some people, but very important.’ And it continues to pay off. Last year the service also won an NHS innovation challenge prize for rehabilitation, which will provide £75,000 to roll out the service across additional sites.
See also Are your service users fit for work?