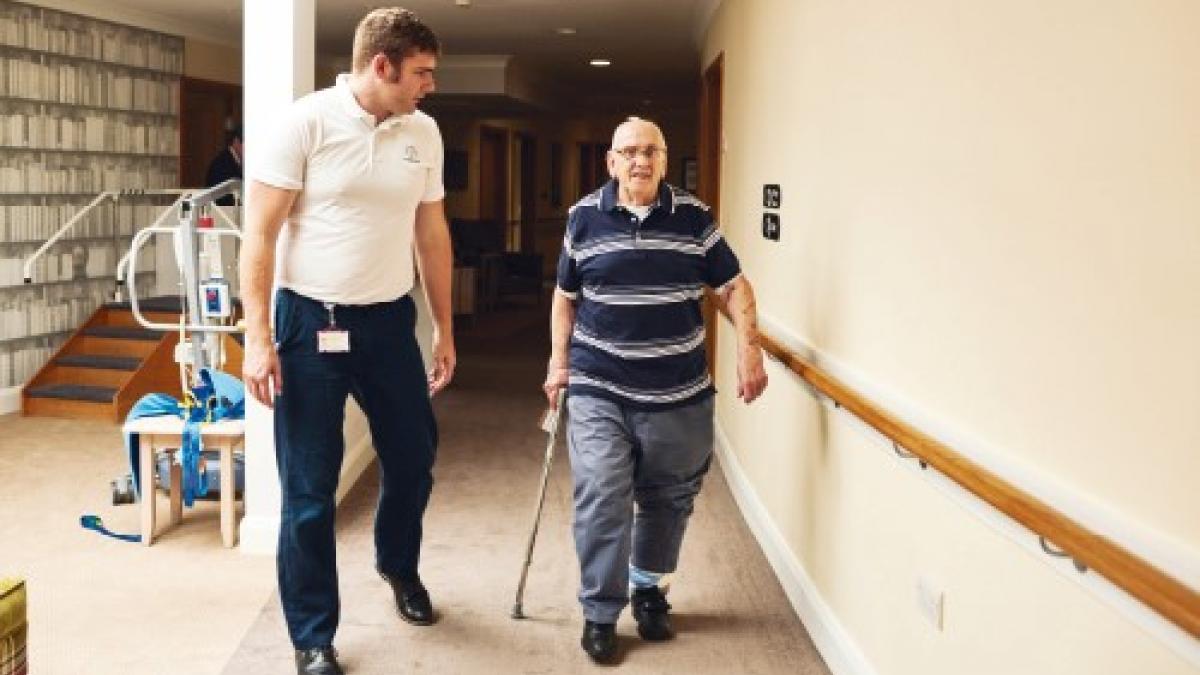 Breakfast-time assessments are just one way in which rehabilitation at Cookson’s Court in Yeovil is out of the ordinary. ‘In hospital, people are in bed and breakfast is thrust on them. Here, we ask what their home routine is like – they may say “I have a wash first, then get breakfast” – and that’s what we enable them to do,’ says Graham Ball.
Employed as a senior physiotherapist at Somerset’s Yeovil District Hospital NHS Trust, Mr Ball spends half his time as the therapy team lead at an 18-bed unit in Cookson’s Court. In what is otherwise a residential care home, the unit is used by the trust to rehabilitate people leaving acute care. In the county of Somerset more than 20 per cent of the population is aged 65 and over, while the UK average is about 17 per cent. And, like many other hospitals, Yeovil struggles to find the right facilities and support to discharge medically fit older patients.
So when a local care home provider completed the development of Cookson’s Court in 2015, the trust took the opportunity to commission its entire third floor with the aim of delivering a range of benefits – for patients and the NHS.
‘We recognised that there were rising demands,’ says Jonathan Higman, Yeovil trust’s director of strategic development. ‘We had full occupancy of our hospital beds and we needed to try to do something different. It led us into a discussion with Somerset Care who had this new nursing home.’
The two parties agreed a partnership. While the care home supplies the space and nursing support, the trust provides occupational therapy and physiotherapy delivered by four full-time equivalent therapy staff, who divide their time between Cookson’s Court and the hospital.

The ethos is to encourage people to be mobile and self-sufficient. Patients have their own rooms in which beds and other furniture can be arranged to mimic their home environment. Meals are self-service and people are encouraged to walk to the open-plan dining area. Therapy is intensive, delivered up to four times each day.
Mr Ball says: ‘In a busy acute setting it’s about getting through as many people as you can. You get bogged down with all the assessments because there are new patients coming in all the time. Here, we see people throughout the day and give them a more intense therapy input. We push them on and get them home quite quickly.
‘We aim for a stay of 10 days, after which we will get them home if they are safe to do so. Obviously, if someone needs a little bit longer we will look at how those needs can be addressed. That can be a whole range of different things. It could be that they need ongoing therapy, in which case we will refer them to our community services and they will go home from there.’
Not all patients are over 65, however. ‘So far, our youngest was 34,’ says Mr Ball. ‘He was knocked off his bicycle. He was in intensive care for a week or so and he had been generally weak and fatigued. We were able to make him feel more empowered and independent, giving him personalised exercise treatment. He did really well in this environment. Although we had earmarked a stay of 19 or 20 days, he went home within seven because of the amount of rehab he had been doing.’
Last year, 310 people went through intensive rehabilitation at Cookson’s Court. The trust says the average length of stay is 8.7 days, against 15 in a community hospital. Its data shows that some 42 per cent of patients leave the facility needing less support than if they had been discharged straight from hospital. ‘Looking at the reduction in care packages, between March 2016 and March 2017, we have saved £1.3 million for Somerset County Council,’ says Mr Higman.
‘And for the hospital, we would have been spending money on escalation wards during the winter months with nursing staff at agency premium rates. There are also other metrics, like a significant reduction in cancelled operations during that winter. That has financial implications for us too.’
Working with Mr Ball is Jordan Muir-Gamble, a rehabilitation assistant who divides his time between the medically fit for discharge ward at Yeovil hospital and Cookson’s Court. ‘Whereas in the medically fit ward patients tend to be waiting for placements and care, and my work is more about maintaining the patients, everyone here is keen to get home and they know they need to work hard to achieve it,’ he says.
A typical day for Mr Muir-Gamble starts with washing and dressing assessments and practice, then proceeds through indoor and outdoor exercise, individually and in small groups.
Among the patients is Derek Wiltshire. He lives alone and was admitted to Yeovil hospital after he fell on the patio at home and was unable to get up. ‘Fortunately, one of my neighbours heard me calling and eventually three neighbours came and one of them, a ward sister, rang for the ambulance straight away,’ he recounts.
‘Since I’ve been here, I have been walking with a stick and even preparing my own breakfast, which helps. On Sunday night I forgot to turn the television off properly and at 3.15am it came on. So I got out of bed, thinking I could do it, turned round and fell.
‘They wouldn’t help me to get up, though. They told me to use my knees and then put my foot up. And I did it. If I had known that a week ago, I would have tried it out on the patio. And I am going to have some exercises on getting up from a fallen position.’

For the nurses and care staff, this hands-off philosophy has been new. And an important part of Mr Ball’s role has been educating them in this type of approach. He thinks it is particularly important so that when therapists are off duty, outside their 8am to 8pm hours, he can be confident that the rehabilitation pathway is continuing.
Dawn Aldred, an advance care practitioner and acting deputy manager at Cookson’s Court, says: ‘If there was a fall  downstairs we would automatically get the hoist. Up here, we get a chair for support and encourage them to get on to their knees and stand up, before we even think about a hoist.’
In February, however, the Care Quality Commission made an unannounced visit to Cookson’s Court and found it wanting. People who had been assessed as at high risk of malnutrition and of developing pressure sores, or who had pressure sores, were not fully protected from unsafe or inappropriate care, the watchdog found. Some systems to monitor and improve the quality of services were found to be ineffective.
Mr Ball says the report was only about the residential section of the building and that the inspectors did not visit the separate floor used by the NHS. He is convinced that there is a big need for facilities like this to improve patient outcomes, as well as the flow of patients through hospitals.
Meanwhile, Mr Higman says the facility has been embraced in Somerset as an innovative model. ‘We have the bed-based care at Cookson’s Court, but what we want to develop is a home-care reablement service for people who could go straight home from hospital if they had support in their own homes.
‘That would mean a wider menu of options for people, but I think Cookson’s Court has been the seed from which this is starting to grow.’ fl