Angela Broadfoot leapt at the chance to become an urgent care practitioner in Lanarkshire’s hospital at home service. Ian A McMillan reports. 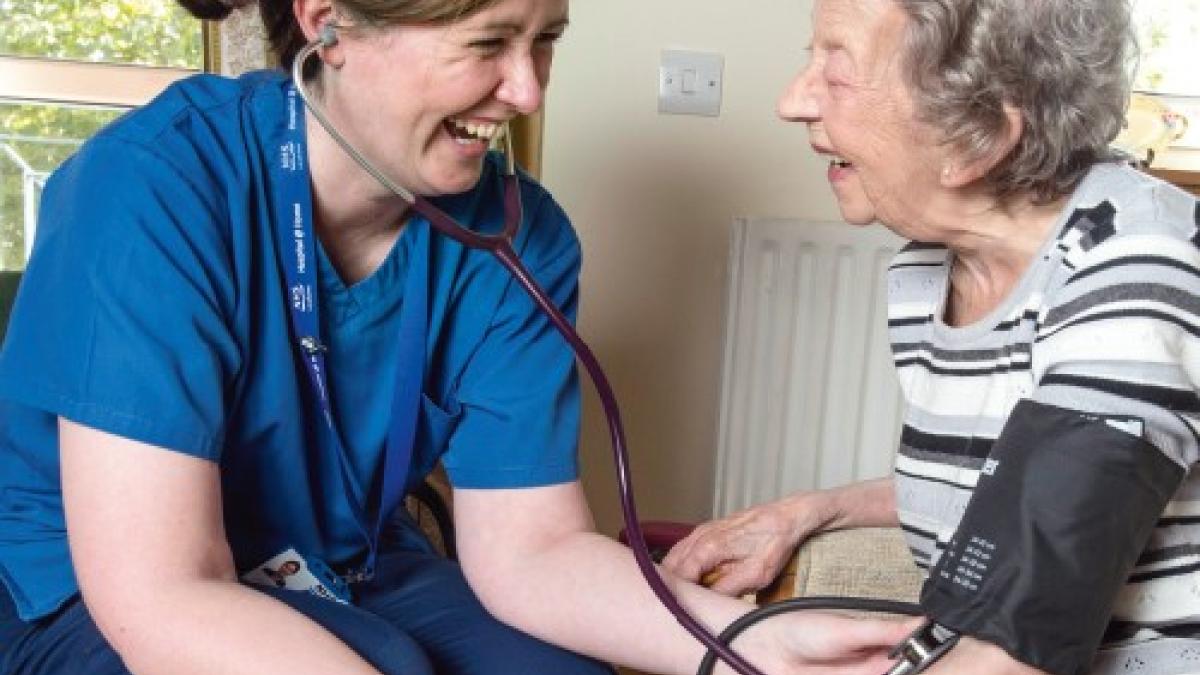 Since leaving her role as a rehab physiotherapist to join the Lanarkshire Hospital at Home (H@H) team in 2013, Angela Broadfoot hasn’t looked back. ‘We are a consultant-led team that offers a hospital-level of care to older people in the community. We prevent admissions and give early support after a hospital stay,’ she explains. ‘I think patients really like the idea that they won’t have to go into hospital.’
Ms Broadfoot, a highly-specialist physiotherapist and urgent care practitioner, is one of three band 6 physiotherapists in the multidisciplinary service. She is based at Coathill Hospital, some 20 miles south east of Glasgow, where she has been acting team leader for several months. Her colleagues include nurse practitioners, a pharmacist, occupational therapists, community mental health nurses and a paramedic. When administrative and clerical staff are included in the full staffing complement, the total reaches 37. Similar service ‘hubs’ operate at Hairmyres and Wishaw hospitals. All three were set up after an initial pilot scheme, known as Asset, proved to be successful.
Ms Broadfoot explains that the main focus of the seven-days-a-week H@H service is on those aged over 65, but that younger people are seen when signs of frailty are evident. Exclusion criteria include stroke and chest pain.
NHS Lanarkshire runs inpatient orthopaedic units at two of its three acute hospitals – Hairmyres and Wishaw, where some of the H@H team’s patients come from. ‘The H@H team helps to facilitate the swift discharge of patients with outstanding medical, nursing, therapy and social work issues back to their homes,’ Ms Broadfoot says.
It’s all in line with the Scottish government’s vision for healthcare in 2020. This calls for a focus on ‘prevention, anticipation and supported self-management’ and says that people should return to ‘their home or community environment as soon as appropriate, with minimal risk of re-admission’. See here.
The need for a change in approach is pressing: the number of people in Lanarkshire aged over 75 is set to increase by 28 per cent by 2024, and by 48 per cent by 2034.

‘As I understand it, what makes us different from other models is that all the clinicians are qualified as urgent care practitioners,’ says Ms Broadfoot. ‘We followed 18-month courses run by the University of the West of Scotland, part of which is done on a day-release basis. Some of us have gone on to do non-medical prescribing courses as well.
‘As part of developing our practice, we also do OSCEs [objective structured clinical examinations], which were originally developed for doctors. I qualified 15 years ago and this has really given me a chance to stretch myself. On an average day, the three hubs see from 15 to 20 new patients and support 70 to 75 patients classed as “active”.’
One of the H@H’s former patients is Maggie Bell (not her real name), who was admitted to hospital after a fall that resulted in a fractured neck of femur. A surgeon repaired her hip using a dynamic hip screw. Mrs Bell’s long medical history included chronic obstructive pulmonary disease, chronic kidney disease and hypertension.
Ms Broadfoot and her colleagues discussed Mrs Bell’s progress during regular meetings with the multidisciplinary orthopaedic inpatient team. Here, staff identify patients deemed suitable for early discharge to the H@H team. Mrs Bell left hospital four days after surgery with a lower respiratory tract infection, which was improving with antibiotics that would be delivered orally once she was back in the community.
Once H@H team members picked up Mrs Bell’s case, they discussed her care plan with the consultant at a ‘virtual ward’ morning meeting. Ms Broadfoot then drove to Mrs Bell’s home to review her progress, working with family members to help ensure a readmission was avoided. On returning to her base, Ms Broadfoot reported back on the outcome of the assessment and, with the consultant’s backing, the team consolidated the management plan.
Research conducted by the University of the West of Scotland showed that 76 per cent of patients seen by H@H teams were managed in their own home, rather than being admitted to hospital (from a sample of 6,434). A surprisingly small proportion of the patients was known to the district nursing service before the H@H team saw them – just 13 per cent. Those known to the social work department was larger: 19 per cent. The study showed the team has also had an impact on hospital bed numbers, with 50 being closed.
There are an estimated 34,891 people of retirement age living in the service’s catchment area – from a total population of 57,100 in that age group in Lanarkshire as a whole. The two areas in the health board’s jigsaw of component parts not yet served are Rutherglen and Cambuslang in Lanarkshire’s north west corner, and the relatively rural and large area of Clydesdale to the south. ‘Eventually, the whole of Lanarkshire will be covered,’ says Ms Broadfoot.
On a typical visit, often at a GP’s request, Ms Broadfoot conducts a comprehensive ‘full systems’ assessment by, for example, making clinical observations, taking venous blood samples and carrying out an electrocardiogram. She also assesses the patient’s respiratory and cardiovascular condition, checks their abdomen, their neurological, musculoskeletal and cognitive function, and ensures they have the correct medication. A consultant visits a little later to ‘make sure I’m on the right lines’, says Ms Broadfoot.
Her input mirrors the type of assessment conducted by junior doctors in A&E, she says, and often means an uncomfortable and time-consuming trip to hospital, and a possible admission, is avoided.
After carrying out a full physical mobility and functional examination, and a pain review, Ms Broadfoot moves on to identify any outstanding rehabilitation goals. ‘Does the patient have a suitable walking aid or do they need any other equipment?’ Do they need referring to the social work department for a package of care? Are there any signs of carer strain, and would support from a voluntary sector organisation be helpful, and acceptable, to the family?’

‘I draw up a plan for the assistant practitioners to put into effect on their home visits. The patient then remains on the H@H caseload until our community therapy colleagues take over to complete their rehabilitation goals. The average length of time that patients are supported by H@H is 5.6 days, after which they are returned to the GP’s care.’
Ms Broadfoot admits to having ‘the odd sleepless’ night in her post. ‘We do have some challenging days and see families when they are at a crisis point. We are often called upon to break bad news, and work very closely with the district nurses who deliver end-of-life care.’ Colleagues are very supportive, however. ‘We very much look after each other here,’ Ms Broadfoot says.
A randomised controlled trial is under way to assess the impact of 10 hospital at home services around the UK, including the Lanarkshire one. While admitting the service ‘is expensive’ to run, Ms Broadfoot adds: ‘We represent money well spent. For every £1 spent on us, it has been estimated that we save £2.’ fl

What the patients say