Claire Sullivan is the first physio to head up the CSP’s employment relations and union services, as Ian A McMillan discovers. 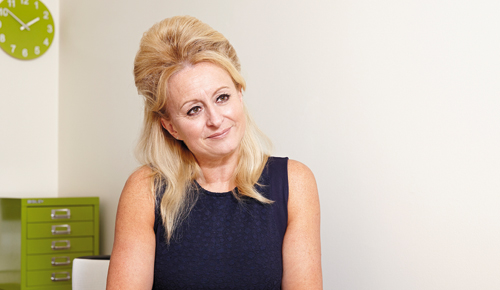 This year began with one milestone for the CSP: the appointment of a physio, Karen Middleton, as chief executive.

And, as the year comes to a close, the latest senior appointment at the society marks yet another first for the profession. Claire Sullivan will be the first physio to take the helm as director of the CSP’s employment relations and union services (ERUS).

It’s also something of a personal milestone too for Claire. Next year will mark the 20th anniversary of her unbroken stint at the CSP, which she initially joined as a junior industrial relations officer specialising in health and safety at work.

If Claire could rewind to 1985 as a recent graduate in physiotherapy from Addenbrooke’s Hospital, Cambridge, would she have been surprised if she could have foreseen how her career would unfold?

‘I would have been,’ she says. ‘It probably wouldn’t have entered my head to think that people might experience difficulties at work or need support with them.’

But, while still bedding into her fledgling physiotherapy career during NHS rotations she became a CSP steward. ‘I found it was as fascinating, and just as fulfilling, to help members to resolve their problems at work as it was to help patients resolve theirs. Lots of the same skills are involved.’

‘In 1992, with help from the CSP, I started a part-time Masters in industrial relations at Keele University, which I completed in 1995. It was a very busy period as I was involved at work in setting up a new multidisciplinary independent living team and, added to that, my daughter was born at the start of 1994!’

Although for a while Claire juggled some physio work with her CSP job, she eventually had to stop practising. ‘But my job at the CSP enables me to combine my passion for physiotherapy and my passion for fairness at work which is an absolute privilege.’

It also means she understands the issues. ‘I’m able to help support members at work, wherever that may be. It could be the NHS, an educational institution, the private or not-for-profit sector.’

As a physio, Claire had a particular interest in young people with complex disabilities, working in one of the first integrated multidisciplinary independent living teams, funded jointly by health and social care.

Claire acknowledges that she has a big pair of shoes to fill, having taken over as director of ERUS from Lesley Mercer for whom she previously deputised. She also takes on the mantle of advising CSP members, in particular the industrial relations committee, on the current pay restraints and attacks on other working conditions, such as downbanding and reduced pay protection.

‘I’m acutely aware that many members, both within and outside the NHS, have now experienced several years of effective cuts in take home pay. Added to that in England, Northern Ireland and Wales, this year the government failed to honour the independence of the pay review body as a fair way of setting pay for the NHS and the many non-NHS organisations that follow NHS pay.

‘Only members in Scotland have received the full recommended pay rise this year, albeit that it remains a tiny one per cent rise, still a cut in real terms. We know how hard this is for our members, who are doing their best to continue to offer innovative, high quality services for their patients.

‘I’m committed to ensuring that we reflect the views of members in everything we do,’ she said.

The last big event she and Lesley attended together occurred in September at the TUC’s annual congress in Liverpool. But what made its biggest mark on Claire was that all the CSP delegates who attended were there for the first time and all spoke at the conference, whether proposing or supporting motions. ‘That takes a lot of guts and is a great credit to the CSP,’ she says.

Outside work, Claire is vice chair of governors at a large further education college in north east London and has been a member of the UK Industrial Injuries Advisory Council since 2004.

When spare time allows, she enjoys time with her close friends, many of whom are physios. A committed, though reluctant, recreational runner, she’s doggedly following the exercise programme a physio designed for her to overcome recurrent knee problems, for which Claire says the technical terms is ‘getting old and paying the price for many years of walking to and from the CSP in high heels!’

Looking ahead, she has yet another imminent milestone: her daughter turns 21 in January. ‘I have a lot to be grateful for: a fabulous daughter, great family and friends. And at work – a dream job and a great team behind me.’ fl

ERUS, along with CSP stewards and safety reps, offers help on employment and other work-related matters. Visit: www.csp.org.uk and search for ‘union’