A social enterprise is training staff to help people to manage their own care after a stroke. Elsewhere, early supported discharge is being promoted by physios, as Louise Hunt discovers 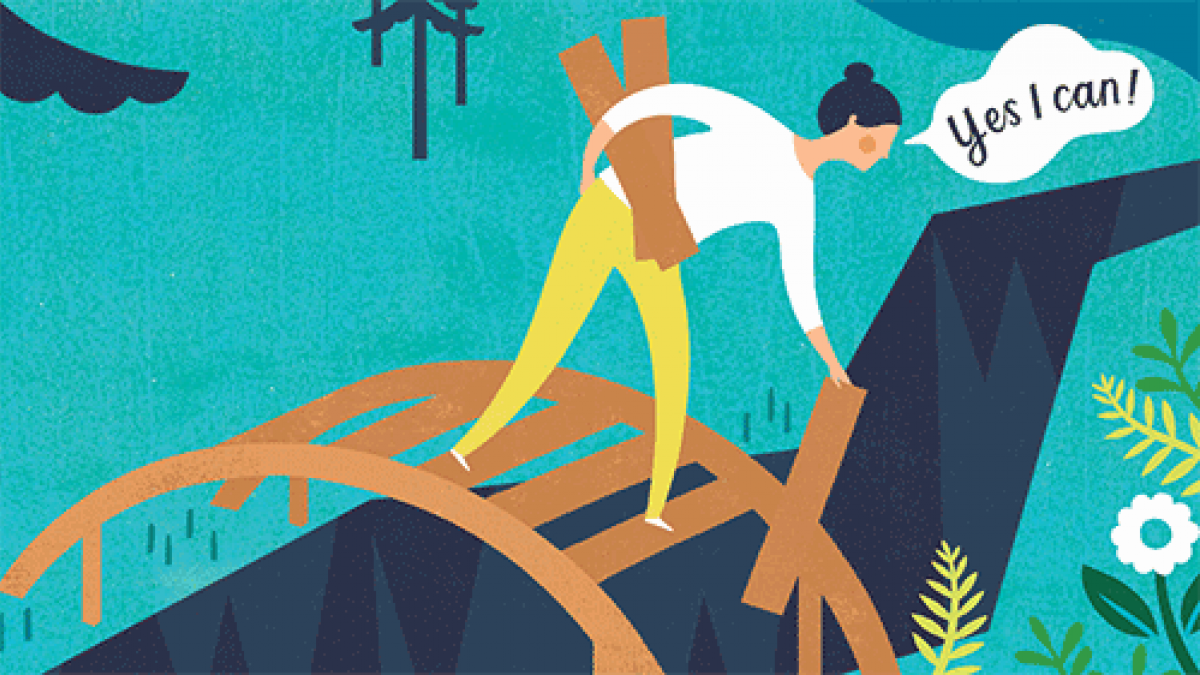 Many of us start thinking about going to the beach at this time of the year and – if we are surf fans – riding the big wave. But what if you’ve had a stroke?

That was the challenge for one man who was being supported by a rehab team in Devon.

Her team had been trained in the Bridges stroke self-management programme. ‘Before, we might have discouraged this goal because we didn’t want him to be downhearted. But now we are more creative about how we can help him.’

The patient had physical and communication difficulties, but the team supported him in expressing his ultimate goal, which led to discussions about how he could be more active and go to the beach.

The physios’ treatment programme involved outdoor mobility and hydrotherapy. ‘Being in the water helps to improve his mood,’ says Ms Cork.

Lycra garments are used to work on upper limb tonal problems. ‘It is a material he can relate to and by practising putting it on and off he sees it as a step towards his ultimate goal of getting back into a wetsuit,’ she adds.

The Northern Devon neuro rehab team is one of more than 70 stroke teams across the UK that have trained in the Bridges programme.

This is run by Fiona Jones, reader in rehabilitation at the faculty of health and social care sciences at St George’s University of London and Kingston University London.

Having previously worked as a physiotherapist in stroke rehabilitation, Dr Jones began exploring self-efficacy in managing stroke for her PhD research.

Further research led to the development of the Bridges programme in 2005, which aims to equip stroke survivors with self-management skills delivered by trained practitioners.

Last year it was launched as a separate social enterprise, based at the faculty.

Trainees attend workshops to learn self-management principles which can be integrated into their practice.

These include problem solving and self-discovery – ‘not always giving patients solutions but enabling them to figure out the answers for themselves, and getting to know themselves and their potential to achieve,’ explains Dr Jones.

‘It is about figuring out a plan together by being very person-centred in rehabilitation goal setting. We also encourage patients to reflect on the progress they have made since their stroke, so they can see they have achieved from their own efforts,’ she says.

Patients who are cognitively able to use stroke workbooks are provided with them as tools.

The books include a range of rehabilitation case studies from stroke survivors, sections for goal setting and recording their rehab journeys. ‘We encourage patients to dip in and out of the workbooks, and for practitioners to be flexible in how they are used, so that it is not something the therapist controls,’ she adds.

The strategy puts equal focus on the physical and psychosocial aspects of a patient’s life post-stroke to consider how their hopes, values and concerns influence recovery. In essence, it is about patients making decisions with therapists on how to support their rehab.

‘We are still doing hands-on therapy, but now we are led by patients’ goals,’ says Catherine Sandbach, physiotherapy advanced practitioner who works across the acute stroke unit and early supported discharge team in Northern Devon.

She says patients often struggle to set goals that fit within the confines of specific, realistic, measurable and timely therapy goals. ‘We’ve stopped talking about “goal setting” and use more meaningful words for patients, such as targets, hopes and aspirations.

By understanding the patient more it helps to be more imaginative in how to break these down into achievable steps.’  Adds Ms Cork: ‘We’ve learnt that it is the process, rather than the attainment of the goal that is important, so patients can come to their own conclusions.’

Jay Patcheappin, a band 7 physio on the early stroke rehab team at Bletchley Community Hospital, Milton Keynes, agrees: ‘The way I discuss goals with patients has completely transformed. Before I might have helped the patient more than I needed to, now when I discuss goals I try not to take over. There’s a fine balance between assisting and taking over.’

It was the need to support patients to feel better prepared at discharge that prompted Mr Patcheappin and his team to undertake the Bridges training.

‘Many patients at discharge felt they needed more therapy and faced several weeks’ wait before they would be picked up by the long-term conditions team. In the community if I don’t take on board the self-management approach I’m not doing them any favours in the long run,’ Mr Patcheappin adds.

Proponents of the Bridges programme believe there is no reason why the self-management strategy cannot be applied in the early days of stroke recovery too.

Sofie Ward, a rotational band 5 physio, who undertook the training while working as a research assistant for Dr Jones, says she was able to apply the principles while working on the acute stroke unit at St George’s Hospital in south London.

‘One patient said he wanted to be able to walk to the toilet on his own rather than use a bedpan. It struck me how important it was not to have to rely on other people for such a basic thing, so we broke this goal down into manageable steps.’

The physios Frontline spoke to also found the workbook helpful in giving patients a tangible record of their progress and practical ideas and examples for maintaining and improving rehab.

‘It is a really good stepping stone so patients don’t feel abandoned when they are discharged. Anecdotally, patients are saying they feel ready. It makes me feel better that I am doing everything I can during that period,’ says Mr Patcheappin.

Both the Northern Devon and Milton Keynes stroke teams have introduced measures to further embed self-management principles into practice.

‘Now self-management is part of multidisciplinary team discussions and treatment plans,’ says Ms Cork. Staff will also be monitored on how the Bridges’ principles are being implemented in treatment to ensure the momentum continues.

As part of his dissertation, Mr Patcheappin will be measuring the impact of the strategy on patients’ confidence levels, and is in discussions with commissioners on how to extend the strategy for use with severe stroke patients.

‘From a policy context, self-management is a number one priority for commissioners,’ says Dr Jones, who is president of the CSP professional network for physios in neurology, ACPIN.

‘I would like to see stroke self-management becoming fully integrated into practice. It is much more on people’s radars than it was 10 years ago, but there is still a tendency to think of self-management as something people are sent to, such as the expert patients’ programme.

Now the direction of travel should be integrating it into healthcare rather than as an add-on to treatment,’ she adds.

The results of a clinical trial on the Bridges programme, comparing patient outcomes in two community stroke services using the strategy against two control groups, are due to be published later this year. fl

Early supported discharge for hospital patients in wakefield after a stroke

Since it was introduced two years ago, the ESD has doubled the number of stroke patients it sees, from 12 to 25 a month. It is part of a large community specialist neuro service serving the Wakefield district, incorporating intermediate care and rapid response.

A recent audit showed that 80 per cent of ESD referrals were seen within 72 hours of discharge. This is done by ensuring that the therapy team keeps one free slot in their diaries a day to assess patients coming out of hospital.

The addition of a dedicated healthcare support team means it is no longer necessary to wait for social care packages to be in place before discharging patients.

‘Everybody who needs care at home can be picked up by healthcare support. It is because we have this team that we have been able to double ESD referrals,’ says Ms Hellewell.

However, the flip side of discharging patients from hospital sooner is that the ESD team’s patients now have greater needs. Two years ago 13 per cent of patients were ranked as significantly dependent, now it is 30 per cent. ‘We can get people home sooner but the challenge is the increasing rehab needs as dependency goes up,’ she adds.

The team has made several adjustments to address this challenge. ‘Traditionally, community staff do lone visits, but we have introduced “doubles days” where two members of the team visit patients together, usually with a mix of skills, which makes it logistically easier to coordinate.’

They have also introduced dedicated outpatient times for patients who are able to travel into hospital.

‘We also find it really helpful that we are part of a large service – the Mid Yorkshire (MY) therapy service and not an ESD team in isolation so we can ask for support from non-neuro colleagues to meet additional demands,’ adds Ms Hellewell.

In addition, a community neuro physio now visits the acute ward to advise on which patients are most appropriate to refer for ESD. ‘Before we were getting less appropriate patients, it is a small time commitment but makes a big difference in the long run and helps to forge good relationships between acute and community staff,’ says Ms Hellewell.

One aspect for improvement highlighted by the audit is that the team is not meeting the target for five therapy sessions a week for ESD patients, as recommended in the NHS Improvement Mind the Gap report – the majority of patients get from from two to three sessions. ‘Not everybody needs five sessions, but we want to look at how this can be higher.’