Love Activity...riding a bike is next on my list

A devastating accident left Michael Thompson in a coma. Key to his ongoing recovery from multiple injuries has been finding an exercise that inspires him – climbing. 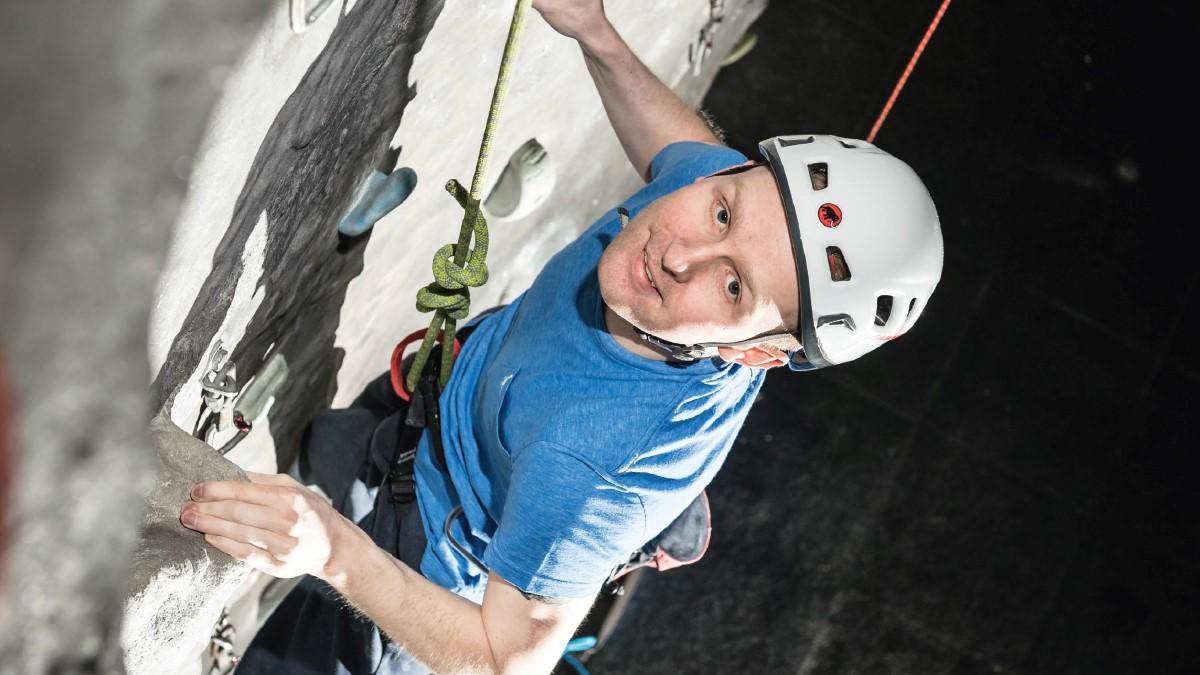 Michael Thompson hears the bell ring and is on his feet in seconds to open the door. It’s no mean feat for a man who was not expected to survive a car accident four years ago that left him with a brain bleed and multiple other serious injuries. As Michael lay in a coma for four months, his parents were told several times to prepare for the worst. But Michael had other ideas and, as he progressed, was determined to prove he would walk again and even return to sport.
With the support of his physiotherapists, he is now more active than his parents ever imagined he could be. He is also an excellent role model for the CSP’s Love activity, hate exercise? campaign. He exemplifies the idea that by focusing on the physical activities that patients with long-term conditions love, and identifying goals, physiotherapists can improve patients’ health through exercise they find fun and rewarding.
On 24 July 2014, Michael, a sporty young man who had enjoyed football, rugby and athletics, and had an active job as an engineer testing energy leakage in homes, was involved in a devastating car accident, which he can’t remember. He had a severe diffuse axonal injury, sight loss and damage to his lungs, chest, jaw, teeth, legs, arms and more.
‘We nearly lost him twice. There wasn’t a lot of hope,’ says his father Derek, in the bungalow in Blaydon, near Newcastle, where Michael lives with him and his mother, Tina. ‘His lung collapsed, his heart stopped, he had a bleed in his brain. His first operation lasted nine hours at the Royal Victoria Infirmary in Newcastle. He was in an induced coma for four months.’
When Michael, 26, woke up he was determined to make the best recovery he could.
He was moved from the infirmary to Walkergate Park Centre for Neuro-rehabilitation and Neuro-psychiatry in Newcastle, where he spent six months. The centre offers an encompassing service for people with a disability caused by injury or disease affecting the brain, spinal cord or muscles. It was here that Helen Dobinson, an advanced physiotherapy practitioner, began to work with Michael.

‘I was determined to make the most of my sessions with Helen,’ Michael says. ‘I knew that physio could help me be “normal” again. At that stage, I couldn’t talk but I could communicate through letters on a board.
‘I looked around and saw other patients moaning about having to do exercises and physio, but I told them this was their big chance to help them be normal again, to do the best they can. I have always been an extreme kind of guy who pushes to do and achieve more. I was just bored without exercise and having people doing things for me.
‘I accept that means I’m different from some people and that moving on is a big thing for me. If you don’t accept help and seize it, it affects recovery. I wanted to build my life again and Helen, my physiotherapist, supported me. She was amazing and understood what I needed both physically and mentally. It’s not all about stretching muscles – it’s about retraining the brain and motivation, too. I don’t find physio hard, it’s just what needs to be done.
‘Helen asked me what my aspirations were. One main goal was to get out of the wheelchair and walk from the Walkergate Centre on my own two feet. I pushed for as much help and support from physio as I could, and I did it with crutches, and there was a great cheer from the staff.’
Michael is extremely proud of the video recording this milestone.

Derek remembers how his son demanded more physio after he attended Bensham Hospital, Gateshead, as an outpatient. ‘There came a time when the level of physiotherapy from the NHS stopped and the clinical commissioning group said he didn’t need it. But we knew he had more in him and could achieve more with intervention,’ he says.
‘Michael bought a house a few months before his accident. We decided to sell it and invest money in private physiotherapy, so he now attends Optimise Neurotherapy Centre. We are lucky to have had the funds to pay for this – it’s been worth every penny.’
It was around this time that Headway, the brain injury association, offered Michael and others the opportunity to try kayaking at the Calvert Trust Kielder, an extraordinary water and forest park in Northumberland that provides outdoor experiences for people of all abilities.
The park also offers indoor climbing, which inspired Michael. ‘He came back buzzing and this is what sparked him to climb. It lifted his spirits,’ Derek says.
‘Headway arranged a climbing session for me and Dad came along to belay [a partner is able to protect the climber using tension on a rope] me. It means we can work together and it feels great to look at the wall afterwards and realise what you have achieved,’ Michael says.

Next goal is a wedding

He sees Catherine Birkett, a clinical specialist physiotherapist in neurorehabilitation at Optimise, who also climbs. ‘It’s great that Catherine likes the sport, too. She’s helping me and advises how much I can do. My right side is affected and I have no idea where the middle is.  Dad videos me and we send it to her so she can assess how I am moving on the wall. I also like to show Helen back at Walkergate what I have achieved. It’s a way of saying thank you to her too. I plan to climb outdoors next.’
However, Michael’s next goal is to walk his sister Amy down the aisle with their father. This is a challenge as the wedding is in Mexico. ‘I’m not worried so much about the flight, as we have had a family holiday in Mallorca since my accident. But it’s a fantastic thing to work towards.
‘I’ll always have another goal, I’m never going to give up trying to improve. I’ve got riding a bike and swimming on my list. I’ve been asked to mentor other people and have talked about this at a conference. I have proved how physio has helped me. It’s a long process but worth every bit of effort you put in.  I think the CSP campaign will make a good impact if physiotherapists help patients to find out what activities they like, and this helps them be more active.
‘It’s a great step forward to help people through their goals to achieve something they really want to do.’
Helen Dobinson at Walkergate, who saw Michael as soon as he was stable, agrees that promoting activity through patients’ own motivations and interests is crucial. ‘As soon as Michael had an awareness he was motivated – and if he could have, he would have exercised 24/7. We provide intense therapy and our role is to be motivational. We sit down with patients and ask them what they want to achieve. Michael set his own goal to walk when he was discharged early on, which really helped.’
Helen was surprised that the campaign’s focus groups of people with long-term conditions reported that physiotherapists haven’t always been associated with physical activity. ‘It is a huge part of what I do as a neurophysiotherapist to support people to self-manage, get more active and exercise, and we have knowledge of what is out there and find places for activities. We encourage activity a lot. We encourage any interest, for example a passion for gardening.
‘We build good relationships and rapport with patients and I think we are key to getting patients active. Of course, we struggle to get some people with cognitive problems motivated and those who are highly dependent.
‘It would appear from the focus group findings that work needs to be done to address how physiotherapists are viewed in this area. I hope it’s a successful campaign.’

Catherine Birkett at Optimise also welcomes the campaign, saying that recognising what drives patients to be active is crucial. ‘Michael has always had a passion for sport and he wants to get better. He is highly motivated to exercise, but struggles with dexterity,’ she says.
‘I see a lot of people who self-refer so they are already motivated to some extent. One of the main drivers is finding something that is social and not full of therapists, so it feels like real life. For Michael this has been rock-climbing.
‘I’Il assess and review Michael before we plan the next goal and intervention, with six weeks of intervention followed by three-month breaks.’
Patients who didn’t play sport before an injury have different motivations. If they have never been to a gym they are unlikely to be interested in that. Ms Birkett believes that everyone has a desire to get back to what they perceive as normal, but the biggest impetus is social and finding networks. ‘One woman wanted to go with her husband to meet friends, but that meant negotiating uneven ground. Working toward this helped physio make sense to her.
‘The value of the campaign will be goal-setting linked to what matters to the person and getting them nearer to real freedom. The focus group findings suggest we are not selling this as physiotherapists and we need to take heed.’