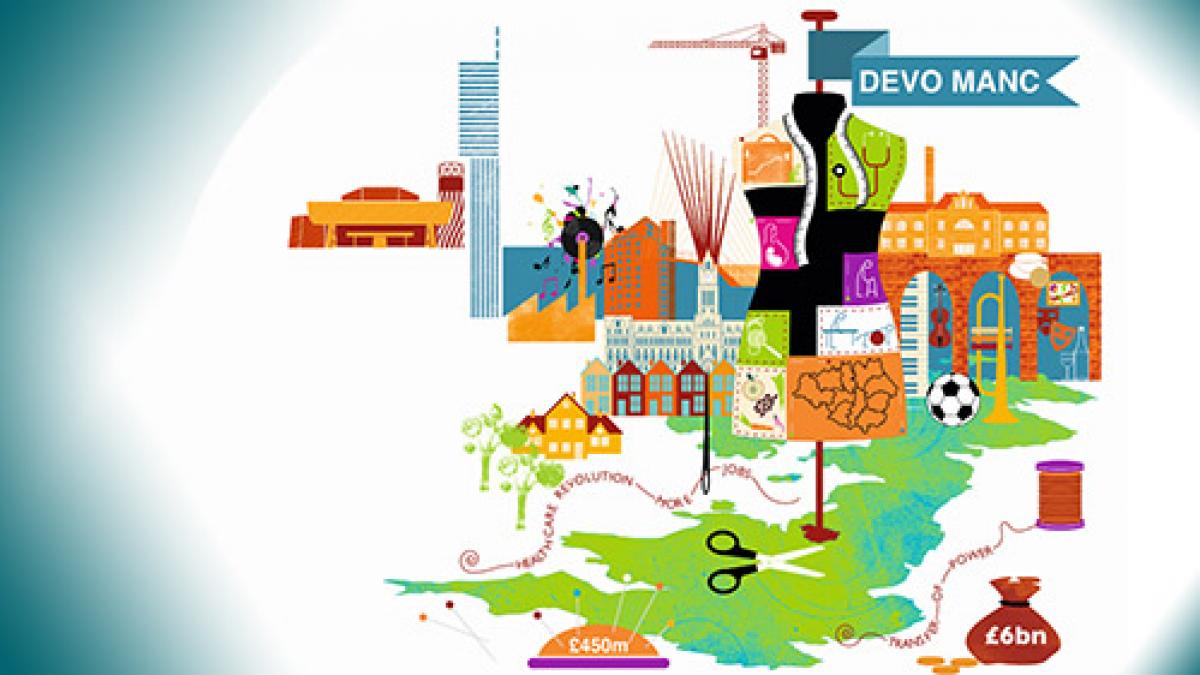 Greater Manchester is on course for a healthcare revolution. Or is it? Two years ago the region’s 37 NHS organisations and local authorities signed an agreement with the government to take charge of health and social care spending and decisions.  Though a combined £6 billion health and social care budget, plus a £450 million ‘transformation’ fund, passed from Whitehall to the region in 2016, change is slow.
At an event for the region’s allied health professionals (AHPs) in February, however, Yvonne Rogers, the strategic workforce lead for the Greater Manchester Health and Social Care Partnership, called on delegates to begin influencing the agenda.  She said devolution gave physiotherapists, and other AHPs, a ‘once in a lifetime opportunity’ to start using that money in a very different way to deliver integrated services.
Greater Manchester is the first region in England to get a transfer of power from central government.  Health think-tank the King’s Fund sees potential benefits from this.  They include an opportunity for greater integration of services – between health and social care, but also with public health and other services under council control. The idea is that local areas can begin to focus more broadly on improving the health of their populations.
Leaders of the Greater Manchester Combined Authority, which represents 10 local councils, say that for the first time clinicians will be able to tailor budgets and priorities to directly meet the needs of the region’s 2.8 million residents.  This aligns with the Five Year Forward View, which says that England is too diverse for a ‘one size fits all’ care model to apply everywhere.
Top priorities for the combined authority are tackling health inequalities and some of the worst health outcomes in the country.  But these are ambitious aims and how they will be achieved is unclear.
Rachel Newton, the CSP’s head of policy, says that change is made much more difficult because of insufficient funding across the whole system. ‘What we need is a new national funding settlement, something that the CSP, the British Medical Association, the King’s Fund and others have been calling on health secretary Jeremy Hunt for,’ she says.
Kath Checkland, a GP and professor of health policy and primary care at the University of Manchester, told the Guardian newspaper that ‘devo health’ was complicating an already labyrinthine system. ‘At a GP level, people are bewildered.  They don’t really know or understand what’s going on.’

What about developments so far?  Each of Greater Manchester’s 10 localities has produced a plan for the future of health and social care in that area.  A strategic workforce board has been created, with responsibilities including developing staff and addressing recruitment and retention.  Added to this is Greater Manchester’s sustainability and transformation plan (STP), including many themes, which cross, cut devolution.
The CSP’s Ms Newton says the important thing is that Manchester has the potential to ‘move towards better planning of services, with resources organised around the patient rather than primary, secondary or social care’.
Preparations for changes in the workforce are under way.  Strategic workforce lead Yvonne Rogers says her organisation has started discussions with NHS Employers on ensuring people don’t lose out if they are transferred between services.  Social care staff are among those most likely to be affected, but not physiotherapists if they transfer from one NHS organisation to another.
Abby Fletcher, a CSP steward and a physiotherapy team leader at Pennine Acute Hospitals NHS Trust, says that, rather than seeking redundancies, her trust is looking to recruit an extra 35 AHP posts.  What is not clear is which professions the new posts will be recruited to.  Ms Fletcher intends to raise this at her next meeting with managers.
When it comes to influencing change, Ms Newton says:  ‘If you’re trying to improve services, then the voices of clinicians and patients have to be heard.’
Physio Naomi McVey, Health Education England’s north west AHP workforce lead, says it will be important for physiotherapists to influence quality improvement work in specific clinical areas or care pathways, as devolution unfolds.  Ms Rogers said it should be possible for staff and their representatives to do this through the 10 locality workforce transformation groups.

Linda Hindle, AHP lead for Public Health England, believes physios and others must drive change and not wait for it to be imposed via locality plans or STPs. Telling delegates at the February event about the importance of making a good business case, she recommended starting with a clear vision of local health needs and challenges, then creating a narrative that inspires others.

The good news is there are tools to help with this. For instance, a new document, Physiotherapy: Buzzing with ideas for Greater Manchester, has been designed by the CSP to inform members and to help them demonstrate the value of their profession.
And there is the CSP’s workforce data model, which shows the predicted supply and demand for the physiotherapists until 2030. The CSP’s cost of falls calculator shows how physiotherapy saves money in areas of the UK.
The society is also publishing a growing body of evidence about the effect of physiotherapy in a range of settings, including urgent care, dementia care, primary care and cancer survivorship.
‘Think about whether your proposal will cost more, because we know that we are in a constrained environment,’ Ms Hindle said. ‘Try to adopt solutions that are going to be mutually beneficial, even if that means you are not going with your ideal vision but with something that can be owned by a group of partners.’
Meanwhile, Ms Fletcher is cautious about devolution: ’It may be positive because it could mean that our services are better designed to meet the needs of the local population.  We could have more specialised posts.
‘There is so much going on, but no one really knows how it is going to impact on us. We don’t know how to feel about it, if that makes sense.’ fl

Physiotherapy: Buzzing with ideas for Greater Manchester
Workforce data model
Cost of falls calculator
Evidence about what works and where