The prospect of taking an influential post can be daunting. Four CSP members who are helping to transform the NHS tell Gill Hitchcock why their physiotherapy skills were key. 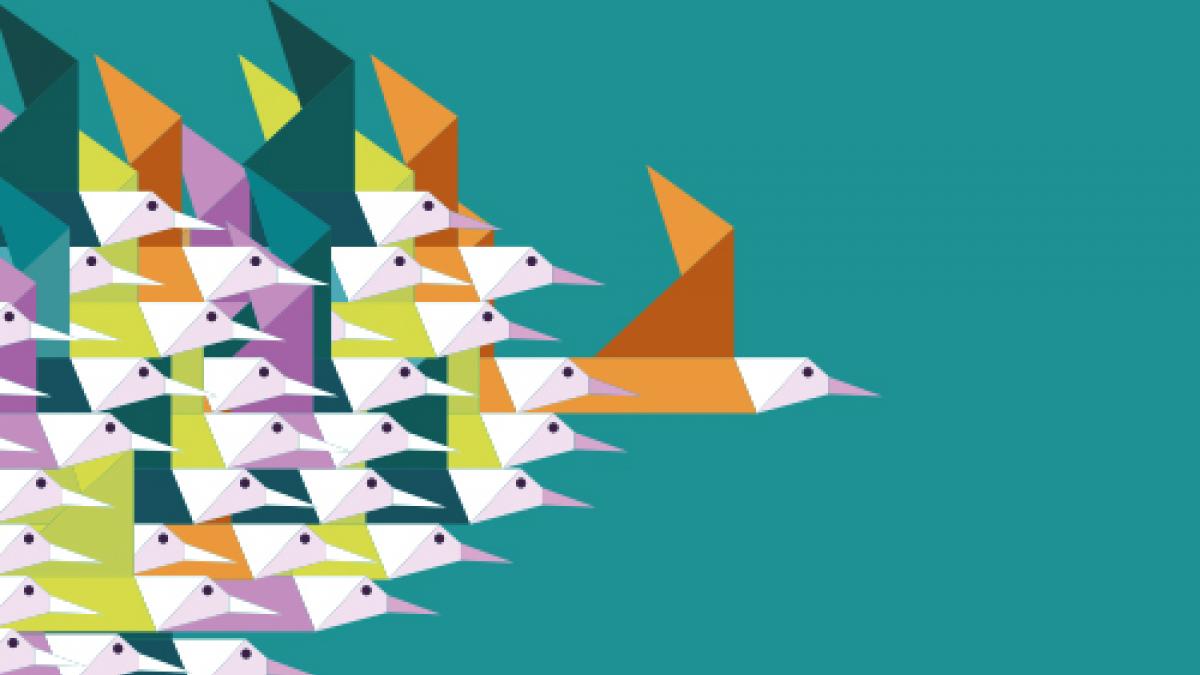 Moving from your traditional clinical role to something outside your comfort zone takes guts. But members who have done so have had a pleasant surprise – and share their tips.

I am the training and evaluation lead for the South Somerset Symphony programme, one of NHS England’s 50 ‘vanguards’, or new models of care, that were created last year.
Initially I went to South Somerset Symphony as one of the stakeholders during the consultation process and then I got pulled into developing the programme. I was in the team that designed a new model of care for people with complex multiple long-term conditions. The vanguard programme allowed us to expand that.

I believe strongly that being a physio has given me the skills to do this job. And particularly being a neuro physio, having the ability assess and problem solve. That creative approach.
What I brought to the design team was a strong understanding, and an evidence-base and ethos around supporting self-management. And very much a patient-centred focus. There was a danger that it might have gone more towards meeting the needs of the providers rather than patients.
It’s a juggernaut of a programme. But because I was involved from the beginning and my expertise is valued I can still pick up the phone and speak to the programme director.

I think it’s important to think about what makes people tick, which is a core physio skill. You learn quickly to pick up the verbal and non-verbal cues and to understand somebody’s agenda and couch things in terms that will bring them on board.
If someone’s main issue is around power, autonomy or respect, you work out what it is that makes them enjoy their job, or what irritates them. If it’s the bureaucracy, or not being able to do the best thing for patients, you have an in-depth knowledge of the model that you’re trying to implement and you present that facet of it to bring people on board.
Some people will resist change whatever, but if you can build a critical mass of people who are for the change, then they get swept along.

‘You have got to inspire people’ Helen Annandale

Head of physiotherapy at Hywel Dda University Health Board and therapies adviser to the Welsh government.

It’s 10 years since I moved into more of a leadership role for a musculoskeletal service, and eight years since I became head of services at Hywel Dda. I never had a burning ambition to be the head of physiotherapy, but an opportunity arose. I could see in my clinical practice that I was making a significant difference to patients, but this was an opportunity to make a difference on a much greater scale. I had ideas, and I’m a doer.

I am part of the Welsh Physiotherapy Leaders Advisory Group and their representative to the Welsh Therapies Advisory Committee. The committee is one of the main routes in to influence the government and ensure the therapy voice is heard at national level. We were influential in making the diploma for physiotherapy support staff happen – and it’s unique in the UK.
To be a leader you have got to have a vision, but it’s important that it’s a shared vision. You can have a vision, but if other people aren’t on board, it’s not going anywhere. You have got to inspire people and my role is about enabling others. I am one cog in the team.
I have no interest in the ‘badge’, it is not about me as an individual. This is a service, it’s about the patient, also my team and I am very loyal to my team.

I think you have got to know yourself. I know more about myself now than I have ever known, but I am still learning new things about my behaviour and how it affects others.
I would say is that we are in challenging times and it’s good to have a mentor or a coach. I am not always positive and when I am having difficult days, I have got to have some way of off-loading. I have not always had that.

I am working with a lot of clinical board members. So having a clinical background gives me quite a lot of credibility, and obviously an understanding, from an operational perspective, of the people working on the frontline, patients and their families too.
Facilitating people by using physiotherapy skills, for example with someone who has had a stroke, is not dissimilar to working with a range of people who have clinical as well as managerial roles.
I think as a physiotherapist I am obviously fairly pragmatic and solution-focused. And the skills needed to build relationships and trust are similar whether I’m working with patients or colleagues. Those transferrable skills have been very much part of what I have carried into my day-to-day role.

There is a tendency in physiotherapy, and in other allied health professional areas as well, to pigeonhole people. You are either a clinician doing physiotherapy or you’re not.
I get asked sometimes by people outside of work “why did you stop being a physiotherapist?” Well, actually I never stopped being a physiotherapist, I have just transitioned.
Certainly post-graduate, there is more emphasis and support for doctors and nurses in leadership. I know that Darzi fellowships are open to therapists, but I have not yet come across one who is not a doctor. But you need to have a wide range of people to take on clinical leadership roles because they shape how services are delivered. So it’s a wasted opportunity.

My role is broader than the CCG these days, as I’m the STP lead for north east London. STPs are an opportunity for physiotherapy to be delivered at a community basis, as opposed a hospital. And certainly self-referral to physiotherapy is something we would want to encourage.
If you haven’t got a voice at the table, however, there is a tendency for people, under financial pressures, to revert to what they know or what they believe the evidence to be. fl
* See also page 20

In 2010, when I came back to Northern Ireland I really wanted to understand how stroke care worked regionally, the interface between services, the direction services were taking.
I came across NIMAST, quite by chance, and joined to understand stroke services regionally, what work streams were being developed, what research was going on.
I ended up joining the committee, but when I was appointed chair in May 2015, it was the first time there has been an allied health professional chair. So I am absolutely delighted.
I felt NIMAST was a bit of a faceless organisation, in that people just thought it was a conference. So I wanted to ensure that we could increase the membership and make sure they were getting value for money.
Since then I’ve been diligently working away at ways of changing that. Now our faces are the website and people can contact me. There are posters in every stroke unit and we are trying to engage undergraduates too, and asking what we can offer, what would you like to see.

I think leadership takes commitment, energy, perseverance, looking for opportunities, and bringing people with you – not telling but encouraging people. And recognising that people have many different strengths.
Nobody has all the answers. I am a really great believer that people come with different ways of looking at things and it’s really important that you hear those people and encourage them. From small acorns, great oak trees grow – you catch the idea.
You need a real self-belief that it’s possible to move things forward, and optimism – not a false optimism, but a belief that sometimes in the face of adversity good things happen.

In the NHS today it’s just not sufficient to be a good clinician. It’s understanding politically where the NHS fits and the direction of travel. And if you have good ideas, voice them, but you must be committed to moving them forward.
As a physio you have good communication and organisational skills, so the type of personality that is drawn into physiotherapy is very well-placed to influence how the NHS is moving forward.