Having spent 15 years at one NHS trust, Victoria Dickens says an ‘organisational memory’ helped her climb the managerial ladder and make the most of her physio team. Graham Clews reports. 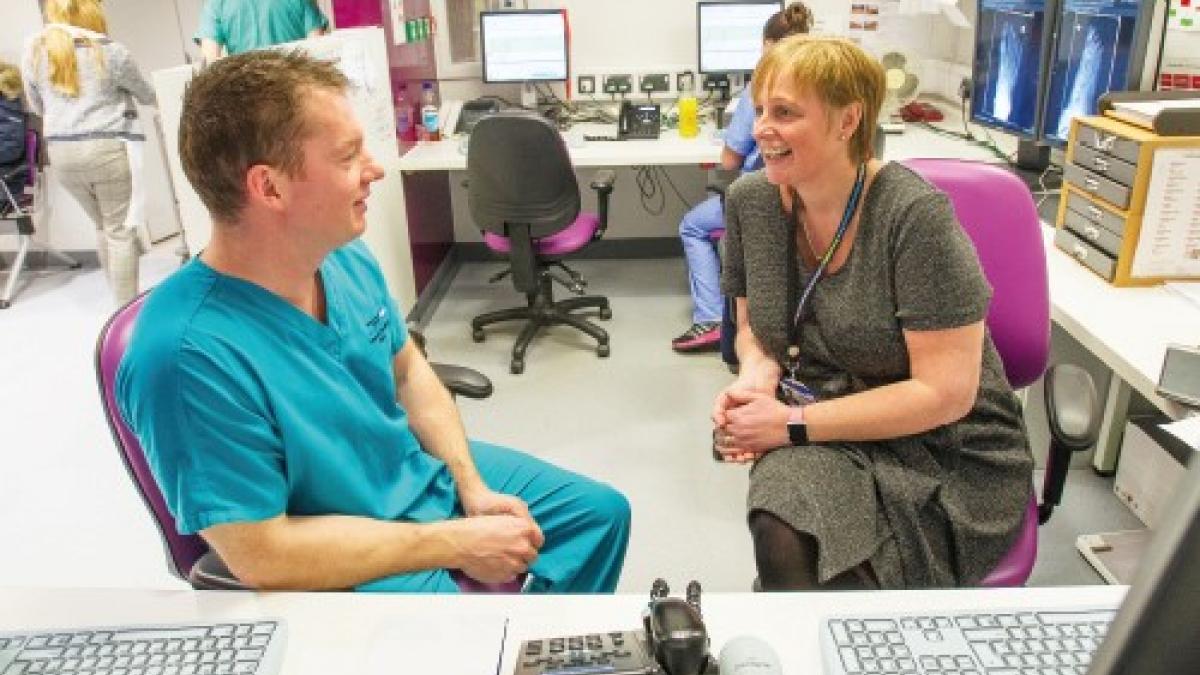 With three consultant physiotherapists and 23 advanced practice colleagues working in musculoskeletal (MSK) physiotherapy, Salford Royal NHS Trust is at the forefront of expanding the role of physiotherapy in secondary care.
The MSK physio team is under the control of consultant physiotherapist Victoria Dickens, who is also the trust’s clinical director of orthopaedics. Ms Dickens’ team plays a significant role in A&E, runs a physio-led spinal pathway, operates a virtual fracture clinic and leads a tier-two triage clinical assessment and treatment service (or CATS).
When she was appointed clinical director in 2103, Ms Dickens became the first physio to hold such a position in tertiary care, as far as the CSP was aware.  Over the past four years, Ms Dickens has used her skills, expertise, longevity at the trust (she joined in 2002), and force of personality to drive through a pioneering expansion in the use of advanced practitioners across MSK physiotherapy.

One of her early innovations was the physiotherapy-led spinal pathway, which Ms Dickens created after noticing that patients with back pain were being admitted to inpatient beds at her trust but then left because they fell under no-one’s care. ‘The spinal surgeons didn’t want these patients because they didn’t need an operation, A&E didn’t want them because they were busy saving people’s lives, and medicine didn’t want them because they weren’t medically unwell.’ As a result, Ms Dickens, recalls, they ‘would just sit in a bed for up to 10 days with no-one really taking responsibility for them’.
What was her suggested solution? ‘I said we could look after them but was told they were complex patients, so I stopped.  But then the problem reared its head again – patient complaints went through the roof, beds were under pressure – so I went back and said for two weeks that will be my job.’
Ms Dickens introduced a spinal pathway, and senior medics and managers were soon amazed at the results.  After the scheme was piloted over three months, another consultant physiotherapist was appointed to run the service 365 days a year.  In its first year, figures covering average patients’ length of stay were slashed from 11.36 to 2.56 days, while admission rates also fell.  In addition, safer levels of care were recorded and patient satisfaction rates rose.

Ms Dickens believes her seniority, and the respect she has built up at a management level, have helped her push through the changes at Salford Royal. Another factor she identifies is ‘organisational memory’.  But she says it’s vital to evaluate innovations constantly and not to rest on one’s laurels.  She is, for example, already considering expanding the spinal pathway model to cover other MSK and degenerative conditions. Meanwhile, a cohort of MSK physios has embarked on advanced practitioner Masters programmes, which could pave the way for physios to take on even more sophisticated work in A&E in the future.
Making greater use of band 8 physio assessments in the trust’s emergency department has reduced A&E consultant time and cut the cost of referring patients for orthopaedic treatments from about £46 to £14 each.
Due to integration and Ms Dickens’ overview of MSK physios, the service at Salford is completely sustainable with skilled staff working across roles – in the fracture clinic but also covering frontline shifts in A&E, for instance.  So although the A&E department employs 2.5 full time equivalent band 8a physiotherapists, they manage to cover the 365-day rota because other sufficiently skilled physios cover some shifts. ‘Although, structurally, people “sit” in different budgets, because I manage those people I can move people around and as long as the books balance and nobody is saying to me “what have you done with my physio?” then it all works,’ Ms Dickens says.

Competency frameworks for advanced practitioner physiotherapists are kept up to date and regularly reviewed, a learning needs analysis is carried out every year, and watertight governance is in place to cover expanded physio roles. ‘Our medical colleagues have been absolutely brilliant and always willing to supervise,’ Ms Dickens says. ‘I think we have 20 non-medical independent prescribers in MSK and all are supervised by medics, which is a big undertaking for doctors.
‘We also carry out joint appraisals with an A&E consultant for A&E practitioners, and I make sure that from a professional perspective they aren’t going off at a tangent.’
As the advanced practitioner roles develop, what used to be considered advanced (previously extended scope) practice has become more mainstream physiotherapy practice.  But Ms Dickens has identified a recruitment gap for physios in A&E departments and fracture clinics.  More trusts are taking on physiotherapists to fill these more complex posts, but there is a lack of structured training to provide the higher-skilled staff needed.
Physiotherapy managers who want to make the most of their increasingly skilled workforce should focus on fostering leadership and recognising the gaps that can be filled by physio staff, Ms Dickens says. Another tip is to analyse what constitutes physiotherapy’s unique selling points, and then prove what they can do through leading by example.  Physiotherapy’s strength lies in the diagnostic and decision-making skills practitioners absorb at undergraduate level, a factor Ms Dickens believes sets them apart from nurses who focus on post-diagnostic care.

Salford stands out as a model for others seeking to expand the roles of physiotherapists in secondary care.  The pace of change in the NHS means there has never been a more pressing need for physiotherapists to shoulder broader and more challenging positions.  But Ms Dickens says advancing the role of physiotherapy will not happen without a lot of hard work and application.  She points out that physios first began working in A&E in about 2003, and that there has been much to-ing or fro-ing in the intervening years over their role and what banding it should attract. ‘Should it be a band 6 or 8a role – no one really knew,’ she says.
‘Everyone liked having physios in A&E but we couldn’t prove it was worth anything.  We were stopping doing things, going back and starting again, doing review clinics, changing the way we worked.  All that didn’t happen overnight. It’s not just “here you go, here are some physios, that’s your problem solved”.’
Ms Dickens offers this advice to anyone looking to follow in her footsteps: ‘You have to be resilient.  If you’ve got a vision, know that you are going to get knocked back. Know also that you need to be passionate and very sure about what you are doing.’ fl