A physio-led falls and respiratory rehabilitation programme in a deprived corner of eastern England is winning plaudits for its buddying approach. Louise Hunt reports 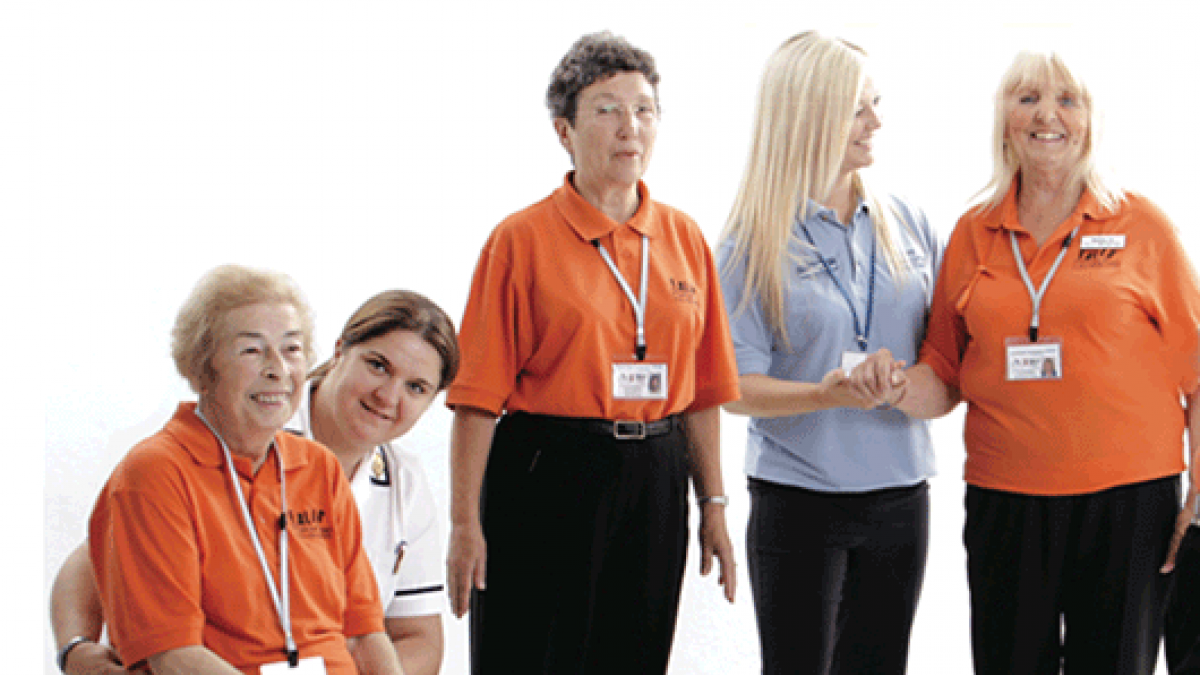 The idea of recruiting former patients as buddies to support patients through physiotherapy-led falls and respiratory rehabilitation programmes seems so simple it is a wonder that it is not happening everywhere.

But, according to physios Pam Hancock and Kylie Farbrace this appears not to be the case.

The pair respectively lead the pulmonary rehab and falls multidisciplinary clinics of the Hope Street Specialist Service, part of social enterprise the Care Plus Group, in Grimsby.

Their approach has won an armful of national and regional awards, most recently the Health Service Journal award for Primary Care and Community Service Redesign last November.

With growing national acclaim and interest, they are hoping to inspire others to follow their example.

The pulmonary rehab and falls prevention services were overhauled and re-launched in 2005 with separate funding from initiatives to improve the health of the local population.

North East Lincolnshire at the time was ranked the ninth most deprived electoral ward in England.

In 2011, Grimsby’s East Marsh – where the Hope Street Medical Centre is based – was named the second most deprived area in the country.

It is well recognised that chronic obstructive pulmonary disease (COPD) is linked to deprivation and before the Hope Street service ‘there were massive gaps in treatment for COPD patients in the area’, says Ms Hancock. She was given a remit to improve rehab services for respiratory patients.

As funding had been provided to develop a falls collaborative, it was decided the services would form a partnership that was truly based on local need. ‘We saw that some of the problems relating to falls, such as balance and muscle strength, could be linked with some of the experiences of the COPD patients, such as inactivity and social isolation.

We could see that if we pooled our resources we could develop a stronger and more vibrant service,’ explains Ms Hancock.

The revamped partnership was based on extensive consultation with patients and carers on what they wanted from a new service.

The process highlighted the psychological barriers to exercise and exertion for these patient groups, such as shortness of breath and fear of falling.

Having an expert in situ was a key wish. But a one-to-one staff ratio was economically impossible. ‘We worked out together that if we had expert patients who had been through the programmes they could become role models for patients and trained to help out,’ says Ms Hancock.

The result is a patient-centred one-stop shop for people with chronic respiratory illnesses, such as COPD and older people at risk of falls. It is based on a medical model within a social context, offering individually tailored eight-week treatment and six-week education programmes, delivered by multidisciplinary teams.

These also include, occupational therapists, specialist nurses and a dietician, supported by physio-trained volunteers called ‘buddies’.

The buddies work with patients on their exercises and deliver the educational components of the programmes; they also help with quality of life questionnaires and patient-feedback forms.

Kylie Farbrace, falls service lead, says: ‘The buddies often get a more realistic view of what’s going on with the patient, and they can tell their stories and what difference it has made to them.’ They also receive all the mandatory staff training, including, basic life support, patient consent and confidentially and moving and handling.

In total, the service has 93 buddies across the clinics. Some specialise in working with patients with Parkinson’s and dementia. ‘The buddies are just as much a part of the team as the staff. Some of them have been with us for the full eight years,’ says Ms Hancock. ‘They are like gold dust to us,’ adds Ms Farbrace.

Having the buddies on board has enabled the service to increase patient capacity. ‘Last year the falls service had 540 new patients. In the year before the volunteers it was 260, although we have had a staff increase as well. Just over 1,000 patients a year now come through Hope Street Specialist Services,’ says Ms Farbrace.

The service places a strong emphasis on incorporating activities into the rehab programmes, and the buddies serve to create a rehab community outside of the clinic, helping to forge social networks for patients.

Some are involved in delivering activities such as Tai Chi, fishing and bowling. Says Ms Hancock: ‘Buddies allow us to do things we wouldn’t have thought about. They act as a conduit for ideas from patients that we try to facilitate. For example, the buddies recently set up a singing group.’

She adds: ‘People go downhill because they are too scared or debilitated to go out and may have lost their social networks. If we didn’t provide any of these activities they may go back to being housebound.’

Ms Hancock believes the reassurance buddies can give patients means they respond earlier to treatment than they might have otherwise, and drop-out rates are low. ‘We’ve seen a massive improvement in both the falls and respiratory patients,’ she says.

Outcomes data for the pulmonary rehab programme shows that, on average, there is a saving of one hospital admission per patient through the course.

In the incremental shuttle walk test the average distance completed has increased from 181 metres in pre-testing to 256 metres, while the endurance shuttle walk test has shown an average improvement from 314 to 707 metres.

The falls programme also demonstrated clinically significant improvements, including a 100 per cent improvement in the six-minute walk test, with an average increase from 80 to 160 metres, and a significant reduction in fear of falling.

Another facet of volunteer involvement with the service is to go into the community and identify where problems may lie for the patient groups, creating links with statutory and other services to resolve them. For example, volunteers worked with local bus company Stagecoach on how to avoid falls on buses.

People at risk of falls now carry a card notifying drivers that they should not drive off until the person is seated.

The volunteers also run awareness events in the community to help drive up referrals, and Hope Street has established good relationships with GP practices and clinical commissioning groups.

‘There are other services that use buddies and volunteers, but I’m not aware of others with the level of integration that we’ve got,’ says Ms Hancock.

‘They are an absolutely untapped resource,’ reiterates Ms Farbrace.

Not surprisingly, such a reliance on unqualified team members was met with some resistance among clinical staff at the beginning. ‘There was some scepticism and nervousness about handing over some of the clinical jobs,’ says Ms Farbrace. ‘But I sold it to them that this was all low level health promotion stuff that we don’t have time to do.’ Checking all the walking aids in residential homes is a prime example, she adds, ‘this is something that our volunteers can do, but we are mindful that they are not replacing staff.’

Introducing the buddy system was a steep learning curve, Ms Farbrace admits. ‘The biggest mistake we made early on was treating them as volunteers,’ she says, explaining there was a tendency to handle them with kid gloves, rather than expect the same performance standards as of staff. ‘It took us a while to realise that it is about quality of service – that we need to be clear about our expectations of them. Now there is a voluntary board governor. We do take it seriously.’

On the flipside, it requires a lot of energy from staff to keep people committed. ‘They like to see the boss and feel appreciated. It’s about giving up your time and building a personal relationship with the volunteer, knowing what their grandkids are called.

‘From a personal point of view it’s been a massive journey. It’s an equal partnership and we think we’ve cracked what they mean by building community capacity, which is probably why we’ve won so many awards.’

Hope Street Specialist Service became part of social enterprise Care Plus Group a couple of years ago and Ms Farbrace believes the move provided an opportunity to influence the organisation as a whole. ‘I think being part of a social enterprise does make it easier to spread the word about the usefulness of volunteers and it has definitely helped in getting other services in our organisation to work the way we do.’

That more physio-led rehabilitation services haven’t taken a similar approach is ‘slightly disappointing’, remarks Ms Hancock. ‘Even the Department of Health has said it is really surprised that not everyone is following our example. We’ve been doing this for so long, but I don’t think services are changing as fast as they could. I think it’s fear of the unknown, and it [the buddy approach] is quite difficult to run and maintain. It is about working together, not diluting your knowledge, but increasing your capacity.’

The service is working with allied health professionals across north east Lincolnshire to share information on its approach, she adds.

Ms Farbrace, who is in the running for a NHS Leadership Recognition Award, also believes the approach could be replicated further afield. ‘It could work for any condition in any area. You can’t bottle what we’ve got because it’s about working within a community and mapping a service to deliver it together.’ fl

Dave Towers recently became a buddy with the pulmonary rehab service after his wife died. ‘She was a buddy for five years, so I’m doing it for personal reasons,’ he says.

Having attended the COPD clinic for six years as a patient, Mr Towers was familiar with the service and staff knew he had much to offer in experience and empathy.

‘Initially, people go to the sessions on their own; they might have just been diagnosed and can be quite frightened. But we show them there are breathing techniques and exercises they can do to help prevent the condition getting worse.

That’s what you can tell them when they start. It is rewarding to help somebody to feel relaxed and not frightened,’ he adds.

Mr Towers, who was a retired prison services medical officer, says having ‘a bit of a medical background’ is helpful. ‘As a buddy you really learn about the exercises and how to work with the patients.

There is quite a lot involved in getting it right. You can’t just walk in and do what you want. It has to be controlled and informed,’ he says.

Personally, I feel that if I can help anybody to stop smoking then I will give my time to do that. I try to be there for them. I tell them my story about how smoking affected me.

They listen because I’ve been through a rough time. The biggest part is having someone who’s gone through it themselves.’

Mr Towers’ commitment as a volunteer comes from a strong connection to the service.

‘Hope Street is on its own in what it does.

I could never walk away from the place. It’s done so much for me and my wife.

You get out of Hope Street what you put into it, and the more you put in the more positive the results are.’