In the first of an occasional series tackling a controversial issue we look at trigger points. 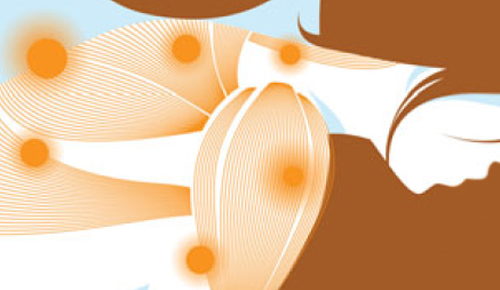 Simeon Niel Asher is an osteopath and leading expert on trigger points who uses the therapy in his work.
Therapeutic touch has emerged in all cultures in all ages.
Massaging painful muscular spots occurred in ancient Egypt, India, Japan, Korea, Rome, Greece and Mesopotamia. In the west, Gowers (describing it as ‘fibrositis’) and later Kellegren, Gunn, Travell and Simons rationalised these hyperirritable spots as ‘trigger points’. Dunbar suggests that touch triggers neurobiological mechanisms via slow unmyelinated CT afferent fibres and a neuroendocrine cascade (oxytocin and endorphins).
According to Gerwin up to 95 per cent of mechanical musculoskeletal pain may be trigger point related.
Mense has produced an elegant body of work elucidating the mechanism of peripheral muscle pain resulting in peripheral sensitisation, and central sensitisation from his research in animal models, summarised in his text Muscle Pain.
Studies over the past decade have imaged trigger points, shown that their activation results in central nervous system activation through fMRI scanning, demonstrated electrophysiological activity at the trigger point, and have shown biochemical changes in the trigger point zone.
Further studies have shown that manipulation of the trigger point modulates muscle function and induces local and referred pain.
Quinter and Cohen do not deny the existence of trigger points but question the pathophysiological basis and suggest a neuritis model.
This model, while interesting, does not fit the clinical experience.
For over 20 years the Quinter and Cohen argument has been simmering away, where it has been proposed and rebuffed. While we may not have the complete mechanisms (new theories abound) for trigger points, their efficacy, relevance and increasing evidence base is compelling.

Adam Meakins is a leading sports physio at Spire Bushey Hospital, Hertfordshire.  He is unconvinced on trigger points
Trigger points are believed to be localised areas of adverse muscular contraction that can be palpated as abnormal knots or taut bands. These are thought to be created by a biochemical crisis at the motor end plate due to direct or indirect trauma to muscle fibres from sustained postures or repeated muscular stresses or strains.
However, despite common belief, there is no robust evidence to support this theory and questions have been raised as to its validity.
Research consistently shows poor reliability in the ability of therapists to locate adverse muscle knots or taut bands with even the world’s leading experts, including David Simons, being unable to locate them. If trigger points really are muscle knots or taut bands, why can’t we locate them?
Studies have also attempted to prove the existence of trigger points as adverse muscle knots with imaging and biochemical analysis. These all have poor methodology with high risk of bias. The results were never repeated independently.
Trigger points are often treated with soft tissue therapy involving deep sustained pressure or invasive techniques such as dry needling in a belief that it disrupts this motor end plate crisis. However, despite claims of effectiveness, the mechanisms of effect for these treatments are unknown and can be attributed to other neurological and psychological pain-relieving mechanisms such as diffuse noxious inhibitory controls or placebo effects.
I believe that what therapists perceive as adverse muscle knots or taut bands are in fact a palpation illusion of normal anatomy and structure, which unfortunately is driven by an institutional dogma and peer pressure to find them.
I argue that trigger points are sore spots of an unknown origin for most, or potentially due to subcutaneous peripheral neural inflammation or ischemia, and do not require needles or thumbs painfully pressed into them to elevate them.

Severe headache
'I am considering needling trigger points and pain gates (LI4 with LR3) to start with for a patient with severe headache following left temporal lobectomy 17 months ago. Any recommendations/advice/articles to support/treat this case will be very beneficial.'
Glass wands

'Glass wands are like a solid glass tube with rounded ends. They are a very handy tool to use on trigger points in the pelvic floor muscles. They save your fingers. Intensive trigger point treatment can hurt your fingers.'
Prostatic pain
'It is always worth assessing men with chronic prostatic pain syndrome thoroughly, both from an external MSK view point (lumbar spin/sacrum, trigger points  – check down the legs as well) and from an internal pelvic floor viewpoint.'
Neuralgia
'We have very successfully used acupuncture around head and face for trigeminal neuralgia, also releasing suboccipital and cervical trigger points. Very unpleasant condition.'
Acupuncture

'I use acupuncture to de-activate trigger points with good success in children. My personal cut off age limit is 14 as children of this age can understand and consent to the procedure.'