Andrew Cole meets Amy Wynne, who helps to lead a new hospital at home service in north east England that's proving to be a big hit with patients who have respiratory illnesses. 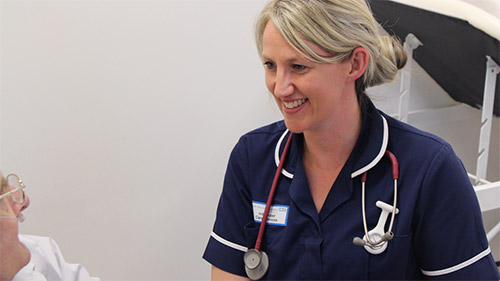 Above: Hospital at Home (H@H) physio Amy Wynne talks to a patient

Experiencing a sudden attack of breathlessness when you have chronic obstructive pulmonary disease (COPD) can be frightening. It can also be something of a vicious cycle. Anxiety leads to panic which can trigger exactly the symptoms you most fear. And, all too often, that can in turn lead to hospitalisation.

North Tees and Hartlepool Trust's Hospital at Home (H@H) service was launched in April 2016. The aim is to break that cycle by offering people whose COPD has worsened an alternative to calling 999 call and a bed in the local hospital. One year on it is already having a significant impact, says respiratory physiotherapist and joint clinical lead Amy Wynne. The number of hospital admissions for COPD exacerbations has dropped by about a third and the lengths of stay for those who are hospitalised have shortened.

It also appears to be very popular with patients. A recent survey found high satisfaction rates among users, with everyone saying they would recommend it to others. As one patient put it: 'This is 100 per cent better than being admitted to hospital.'

The Hartlepool area has a high incidence of COPD and has also seen worrying increases in the number of patients with COPD being hospitalised over the last decade with problems such as breathlessness and increased sputum and coughing. Some of these patients may be admitted on multiple occasions each year - and that is a very expensive business, estimated to cost the trust more than £2 million a year. Yet for many hospital is not the best place for their problems - it is just that until recently it has been the only place.

Following last year's launch, the H@H service began to change all that. The service - which covers Hartlepool and Stockton - is staffed by a multidisciplinary team of consultants, nurses, physios and care assistants. It is available seven days a week, from 8am to 8pm, and sees from 25 to 40 patients each day. Patients are initially referred through their GP, community matron or other health professional. If they are judged to be suitable they will receive a home visit within two hours where they will be fully assessed and a treatment programme agreed, tailored to the individual's particular needs.

Cutting the length of admissions

This could involve several follow-up visits that focus not just on treating the immediate condition but also educating patients about such things as medication management and use of a nebuliser. They may also be referred for pulmonary rehabilitation. And they are guaranteed an appointment with a specialist consultant within the first six weeks. Once on the H@H system, patients can self-refer if they further problems arise. Sometimes this may simply involve a reassuring phone call. Or they can be signposted to other services that would be more appropriate.

Often, says Ms Wynne, just knowing the service is there will be sufficient to allay people's anxieties and avoid a relapse. 'Some patients we see wouldn't have gone to hospital but they have built a relationship with us that means when they're poorly they have that trust that allows them to ring us and seek reassurance.'

In her view the service is meeting an important need.

'I just feel we can give them more in their own home with their own comforts. They have a sense of continuity and they're receiving treatment on their own terms. In hospital it's not their home, their bed or their food - and it's a lot more costly.'

The team has also helped to reduce the length of stay of those patients with COPD who do find themselves in hospital, providing the home support necessary to allow most to be discharged after 72 hours rather than the previous norm of five to six days. This has led to an overall 20 per cent reduction in the length of stay.

Overall, team members reckon that six in 10 of the patients they see would otherwise have been hospitalised. And impressively, when it did a week-long PDSA (Plan, Do, Study, Act cycle) with local GPs to highlight the benefits of H@H, not a single patient with COPD was admitted to hospital.

As joint clinical lead of the service, Ms Wynne balances managerial with clinical responsibilities. It is a long way from the traditional physiotherapy role she used to undertake. In clinical terms, Ms Wynne now sees herself as a practitioner who can respond to most patient needs - not just the physiotherapy ones. 'We use a generic assessment which is a more effective way of operating,' she says. 'I now feel I can probably do about 95 per cent of a patient's package of care without having to get someone else in.'

She believes physiotherapists are particularly well suited to this holistic approach. 'As a physiotherapist I've always been an autonomous professional. I am used to identifying a problem and coming up with a treatment plan - and assessing the whole person, not just their chest, for instance.'

It is a job she 'absolutely loves', she says. And although pleasing to head a service that is saving the trust money, her real satisfaction comes from the feedback of patients themselves. 'What the patients are saying and telling us is the biggest thing. And their comments so far have been phenomenal.'  fl

To find out more about the PDSA cycle, visit http://bit.ly/2r0kcbf

For Dorothy Tiplady the H@H service has been a godsend. She had a series of debilitating chest infections in the months before she was referred to the service - probably exacerbated by her reluctance to go to hospital for treatment.

'I'm frightened I won't come back out alive,' she explains, only half jokingly. But she also felt hospital didn't really meet her needs.

'The staff just don't have the time and there are so many coming in with COPD they can't cope - they're overwhelmed,' she says.

So when her doctor told her about H@H last year, she jumped at the chance. She was seen by a nurse almost immediately and put on a nebuliser to stabilise her condition.

Within a few weeks she received a new course of treatment and has experienced no further attacks since.

'I just felt alone before whereas now I've got people behind me,' Ms Tiplady says. 'They are very friendly and because they're coming to your own home I think they're more relaxed. I'm certainly more relaxed with them. I like to be at home and I think a lot of older people do.

'It's also nice to know they'll be there for me whenever this happens again. They're just a phone call away.'