Help at hand: Children and hemiplegia

Gill Hitchcock reports on the issues affecting children with hemiplegia and outlines how physios help them gain independence in adulthood. 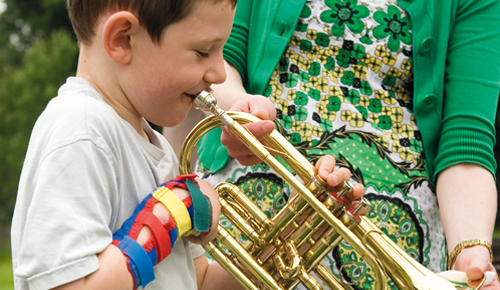 Hemiplegia causes paralysis on one side

Suzanne Lawrence describes the Leicestershire HemiHub as a ‘one stop shop’ for children with hemiplegia. She is a physiotherapist and advanced practitioner in physical disability with the scheme, which is run by Leicestershire Partnership NHS trust. Since the project started in April 2011 it has developed into a ‘hub’ of three physios and two occupational therapists (OTs) who offer ‘holistic’ care to about 90 children.
Hemiplegia, or paralysis on one side, has the same incidence rate as Down syndrome. Each day in the UK between one and two babies are born with hemiplegia and because it is caused by brain damage – 80 per cent of cases are the result of a stroke – it affects more than motor development. One child in two has an additional diagnosis, such as epilepsy, visual impairment or speech difficulty. And some children experience challenges including perceptual problems, learning difficulties and behavioural or emotional issues.
This is why Ms Lawrence believes the hub’s ‘holistic’ approach is so significant: ‘We are looking at the whole person. We are not just looking at their walking or hand function, but also at their access to recreation and education. It’s about seeing the whole picture.’
Amy Couture is chief executive of hemiplegia charity HemiHelp. She argues that a rapid diagnosis and early intervention are essential to achieving good outcomes for the child and their family. But she says that identifying the condition can be difficult because the exact causes can be different and no two cases are the same.
‘We do hear of cases where hemiplegia is not picked up and it’s very much down to a parent’s intuition or that of a grandparent who has said, “their hand is in a fist, it looks different”. So that is how it is picked up sometimes, rather than by a health professional,’ she says. 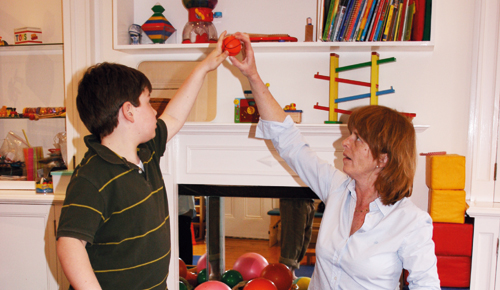 Joanne Nichols is a physiotherapist at the Kaleidoscope Child Development Centre, a joint NHS and local authority project for children and young people living in the London borough of Lewisham. She says that for children with hemiplegia, physiotherapy is key to enabling them to manage their condition and learn how not to compensate by over-using their non-hemiplegic side.
‘One of the biggest challenges of working with the children is trying to get them to use their hemiplegic side,’ she says. ‘They tend to neglect it a little bit, and it is important for us to remind them to use that side and get them to do two-handed play, so they can use that hand functionally.’
Senior paediatric physiotherapist at Mid Yorkshire Hospitals NHS trust Helen Abiad is working on improving proprioceptive treatment for children with hemiplegia.
‘Because the children often neglect their affected side, we need to build up that proprioceptive awareness,’ she says. ‘We do it through exercises, which involve weight bearing and doing activities out of a spastic pattern, if they are a child that goes into a spastic pattern of movement.’
The aim, says Ms Abiad, is to maximise the child’s potential: ‘The condition is not going to go away, but it is getting the best that we can for the children within their capabilities.’ In the NHS, exercise programmes are not supervised or assisted by physiotherapists on a daily basis, rather by a support worker at school or parents at home.

South Yorkshire-based physio Helen Dinneen says that having a three-year old son with hemiplegia has given her new insights into the condition and a better understanding of how varied it can be. She has some key message other physios: ‘The fatigue aspect will limit you at every corner is you don’t understand it. So you can have a great plan for exercises and strengthening, but if you can’t address the fatigue issue you will never reach the next stage.’
If children with hemiplegia have an infection, such as a cold, it can dramatically affect how symmetrically they breathe, she says. The non-hemiplegic side of the chest will have much better capacity than the hemiplegic side and this will massively affect their fatigue levels. And when they have recovered from an infection, the fatigue can continue for another for another two or three months.
The physio needs to do a lot of work on breathing and stretches, and even chest percussion to encourage more chest improvement, she says. A severe epileptic fit can be very debilitating for children with hemiplegia and mean they can’t continue with regular exercises.
Asked whether NHS provision is adequate, Ms Abiad responds: ‘It’s difficult to say. Some parents would argue they would want a physio to be involved, but often things need to be done daily so it would be impossible for a physio to see every child on their caseload daily.’
And the nature of treatment changes as a child gets older and team working becomes particularly important, she says. In relation to older children, she often works closely with orthotists and OTs. Orthotics and splints can be used to help correct the position and functionality of hands and feet, and the child’s environment can be adapted to enable them to live as independently as possible.
At the Kaleidoscope centre 14 full and part-time physiotherapists work alongside a range of other healthcare professionals, including OTs, language therapists and doctors, to care for the children holistically. ‘The range of professionals here makes multidisciplinary working very easy,’ says Joanne Nichols. ‘This is important for a child with hemiplegia, as each profession can look at a different aspect of their daily function.’

Ms Abiad talks about the potential of therapies that are not routinely used by every therapist: ‘Something like botulinum toxin injections are used quite widely, but you wouldn’t put every child in for them. It causes the spasticity to go from the muscle, but it is only short term within which time you can work to help a child, for example, with better weight bearing through their affected leg, or with some stretches.’
A major concern for those involved at HemiHelp is that while there is good provision of care for children, when they reach the age of 16 care becomes much more ad hoc.
‘Adults with hemiplegia can get a block of physiotherapy if they have a specific issue, but not continuous support,’ says Ms Couture.
Hemiplegia can speed up the ageing process. People can be affected by early-onset arthritis when they are in their early 30s and there is no care plan in place to help. ‘It’s just another thing to fight for,’ Ms Couture adds. fl

The charity HemiHelp provides support and information to people with hemiplegia and their families across the UK.
It was set up more than 20 years by parents of children with hemiplegia, who felt they were not getting the support they needed.
It remains a membership organisation, of families and healthcare professionals, such as physios, OTs, GPs, paediatricians and neurologists.
One of HemiHelp’s key aims is to work in partnership with medical and education professionals so that everyone with hemiplegia and their families are understood and receive the support they need.  For more information, visit their website here.