Being a head girl at school helped stand Frances Hunt in good stead when she took up a leadership role in the NHS. Chris Mahony reports 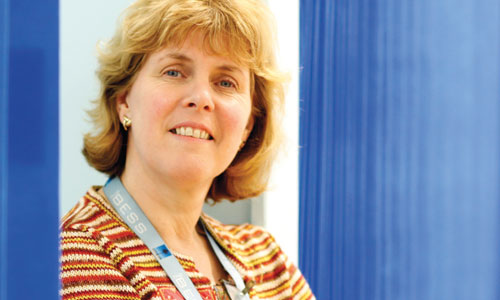 A propensity to ‘bossiness’ due to  having been the oldest child in her family and a former head girl might help to explain Frances Hunt’s triumph in the ‘demonstrating leadership’ category of the CSP awards last November.

Throw in a self-confessed tendency to promote physiotherapy to other clinicians and NHS bureaucrats at every opportunity and you begin to understand what made Ms Hunt stand out in the judges’ eyes.

Her leadership qualities were captured in the nomination form her colleagues completed as Ms Hunt neared the end of a three-year spell as ‘interim head’ of physiotherapy services at Torbay Hospital, part of South Devon Healthcare NHS Foundation Trust.

They said she had ‘been unflinching in the difficult decisions that she has had to make; been creative and bold in making service changes and unreservedly supportive of individuals and teams that have developed new ideas’.

In a phrase that must particularly move Ms Hunt, they note that: ‘Many of us would not be in leadership and innovation roles ourselves without her support and vision.’

The nomination form and hearing Ms Hunt discussing her career and leadership style confirm that there is genuine two-way affection – as well as respect – between leader and led.

But what of the earlier reference to ‘head girl bossiness’, a character trait that also provides her with the self-confidence to argue with senior managers contemplating the freezing of a physiotherapy vacancy.

‘I’m not a control freak but I can be quite bossy – I’m the oldest child and I was head girl at school. If you take on responsibility early, that is often carried on into later life.’

Ms Hunt wonders if her experience of being a head girl at her Bristol comprehensive instilled in her some useful character traits.

Her enthusiasm and apparent bonhomie make you suspect that she is equally open and respectful of colleagues, and potential colleagues, from all backgrounds.

Ms Hunt admits that she loves conversation and is overjoyed that her job allows her to indulge the loquacious but enquiring side of her personality.

She talks to – and listens to – patients and colleagues. Even in the demanding interim stint as head of all physiotherapy services, she insisted that 25 per cent of her time should be devoted to clinical practice.

Now she has returned to leading just the outpatient physiotherapy service, that percentage has risen to 60 per cent.

‘I have a great role – seeing patients and going around talking to colleagues and sometimes helping them through problems.

My children ask if my job is just to talk to people. I help colleagues understand where the service is going and to sort out clinical problems.

I am happy to make decisions – even if they are not always right – as long as I can justify it.

‘That is what I want from a leader – someone you can go to and say “this is what I am planning, what do you think?” and they say yea or nay.

Our team leaders are very good but it is useful for them to have a sounding board.’

Staff appreciate this commitment to communication, according to Emily Lovell, the team lead physiotherapist and CSP member.

Ms Lovell says: ‘Frances is very involved with staff, very good at communicating and getting feedback so they feel involved and informed.

‘Frances got the staff on board for big changes. She would not expect us to do anything she would not do herself. When Frances is planning a change, such as introducing a new outcome measure, she always does the pilots and trials herself first.

‘That means she fully understands what she is asking of staff – it shows us that we really can change the way we work in a busy department because she has shown it is possible.’

Ms Hunt likes the service improvement activity that was a big factor in her award success, a natural extension to her enthusiasm for ‘solving problems’”.

‘I encourage people to do evaluations of our services and ask what our patients think about every aspect of our service – how can we improve it?

If colleagues take on that sort of role themselves then they are developing as clinicians and I do believe succession planning is very important in the NHS and other organisations.’

When taking on the interim role she did not expect it to last three years but says the scale of organisational restructuring led to delays in making permanent appointments.

‘My biggest challenge was following in the footsteps of her predecessor, Fiona Jenkins. She was so innovative and staff were enabled to try working in different ways.

I had massive respect for her ability to get things done: I really believe that there comes a point when you have to stop asking about the pounds and pence implications of a change and just do it and sort the problems out as you go along.’

Predictably, Ms Hunt seized the opportunity to learn new things – ‘particularly about money – I even got a minor finance qualification which was a real eye-opener. I did it through e-learning – another eye-opener”.

She has also been on management and leadership courses, noting ‘there are differences between the two – you can be a leader without being a manager and the other way round’.

‘All of the staff were up for most of the changes we introduced and that really helped me. I think the CSP award is recognition of the physiotherapy team’s role in the progress of the organisation.’

Such sharing of the credit for innovation and leadership is typical of Ms Hunt, Ms Lovell says: ‘She thinks this is part of the job because she is very modest but Frances would not have won the CSP award if it wasn’t something beyond that.’

‘If working on the wards was good enough for five days a week, then why not seven?

It is a chance to treat patients more quickly and to ensure they are discharged home safely. The idea had been there for a long time but it just happened to be implemented when I was responsible.

‘I could work more closely with inpatient services team leaders and explain the changes to the physios.

Matrons and medical staff on the wards were obviously very keen and it saved the trust quite a lot in overtime payments to have staff rostered for seven days rather than a five-day service and an on-call system at weekends.

‘That was a bit sensitive for staff who had previously got the overtime but they know we are here to provide a service and a lot of the feedback now has been quite positive.

They are finding advantages like shorter journey times at weekends, easier car parking and that it can be good to have days off in the week to do different things.’

‘Where employers engage with the workforce over arrangements to move to seven-day working, and where there are sufficient staffing resources to run them efficiently and effectively, then our members are very willing to be involved in delivery of this.’

Earlier in her interim role, Ms Hunt played a key part in radical changes in the outpatient service, including patient self-referral and the 72-hour booking service that eliminated outpatient waits and improved patient access.

‘We “nicked” the choice appointments idea from Eastbourne in 2006 and gave it our own flavour,’ she says with candour.

‘Physiotherapists cost less than orthopaedic surgeons, for example, and there was a time, particularly during the implementation of the 18-weeks target, when orthopaedics was very challenged.

It became an opportunity for extended scope physiotherapists to be developed to take on new challenges such as managing patients and requesting tests. I was keen to encourage people into becoming extended scope practitioners.’

Ms Hunt is convinced that such developments herald an exciting future for physiotherapy.

‘Commissioners like physiotherapists because we are very practical people and solve problems.

Most physiotherapists I meet have a “can-do”, positive attitude rather than being interested in endless meetings.’

It’s clear that Ms Hunt is a remorseless champion of the profession. ‘I am quite good at begging. If I ever had a post frozen I can do quite a good begging letter – I fight.

‘It was quite a shock having to justify replacing a band 6 physiotherapist who will spend all their time with patients – it is good for patient care and makes financial sense.’

And if sweet reason fails, there is always the head girl approach to fall back on. fl

Want to apply for the 2014 CSP Awards? Look out for the launch on 4 April