Physio staff in the south London borough of Greenwich are helping to pioneer a new approach in older people’s care. Louise Hunt reports. 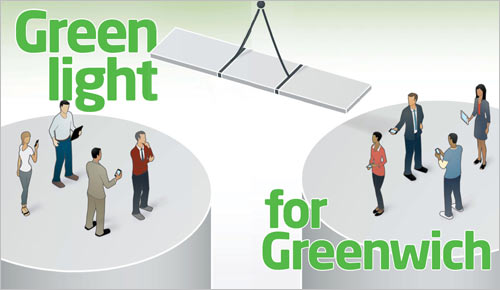 By 2018 the government expects integrated health and social care to become the norm in England, with a project in every part of the country by 2015.  From next April a £3.8 billion pooled budget called the Better Care Fund will be launched to support service redesign for joined up care.

The overall aim of the integration policy is to shift more care into the community to address the challenges of an ageing population and avoid emergency – and potentially lengthy – hospital admissions. Physio staff are playing their part in many of these pioneering projects.

Across the UK, there are as many different approaches to attaining this holy grail as there are interpretations of the word integration.  Frontline visited one pilot site in the Royal Borough of Greenwich, south east London, to explore how integration works in practice and what impact it is having on community physiotherapy services.

The Greenwich Coordinated Care (GCC) model is one of 14 Department of Health ‘integration pioneers’ that are showcasing different best practice approaches to coordinated health and social care. It involves all the health and social care teams from Oxleas NHS Foundation Trust and the local authority involved in managing care in the community.

A number of integrated services have been developed under the umbrella GCC model. One, the ‘Eltham Test and Learn’ pilot, as it is known by staff, was launched in January to wrap health and social care teams around GP practices to manage complex cases. While it is open to every adult who has an Eltham GP, the average age of patients is 76, as the area is home to a large population of older people. The model will soon be trialled in another part of the borough with a different demographic.

Under the system, each patient has a shared action plan agreed by the patient and the professionals identified as being relevant to their care pathway. These may be from a core team, which includes the Eltham community assessment and rehabilitation team, and a wider network of tertiary, council and voluntary services. The system is managed from the GCC hub, which includes specialist integration lead Wendy McDermott, and three care navigators, who work act as links between patients and professionals on delivering the shared action plans. Physios attend monthly multi-professional meetings at each surgery to discuss patient progress.

Ms McDermott, an occupational therapist (OT) by background, explains the model’s ethos: ‘We are moulding services together to try to help patients feel there are no barriers. This is not a medical model, if the patient has issues around housing, or isolation or pain we would bring in the correct professionals.’

Typically, patients will be under the service for eight to 12 weeks, but some with mental health problems may need up to four months. ‘There would be something wrong if they were with us for too long,’ she says.

Two physios delivering care under the pilot say the change in approach is making their services more efficient and responsive to patient needs.

Daniel Smith, physio lead for the falls team and the Eltham community assessment and rehab team, says having all the necessary information on patients through the i-statements and easier access to other services is ‘saving an awful lot of time’. Crucially, this has led to an increase in capacity in the falls team. ‘There has been a significant improvement in the numbers of patients we can see because we are working more efficiently,’ he says. Preliminary statistics on falls patient throughput has shown a 50 per cent increase in referrals from the GCC since the pilot began.  The team is in the process of collecting data to compare the difference in administration time for those patients who are not referred through the GCC hub.

The monthly GCC meetings also mean that the neurology team, which is involved in long-term management, can be more responsive to changing patient needs, rather than having to wait for review dates. ‘Now that we are able to coordinate everything from one point we don’t have this hiatus, we can respond faster in our treatment as needs start to develop,’ says Mr Pinheiro.  Mr Smith agrees: ‘It’s about the right treatment at the right time. In physiotherapy you can’t always keep track of everyone all of the time, the GCC plays an important role in identifying those who are at risk, so we can go in and provide intervention at the optimal time, not two-three months too late, so we can prevent a whole load of other complications.’ The physios appreciate the patient-centred focus of the ‘i-statements’ used.

These are records of the patient’s health and wellbeing needs and goals that form the basis for a shared multi-disciplinary action plan. These epitomise the biopsychosocial care model and broaden the scope of rehab, they say.

Importance of linking up with GPs

Rather than being only rehab-focused, patients’ goals go into much broader detail. Says Mr Smith: ‘With the i-statements you find out what is most important to that individual. We are maximising the impact we can have by allowing people to achieve what it is that they want to focus on. It starts to make what we’re doing more functional.’

Mr Smith gives an example of one patient who had long-standing anxiety and depression as well as chronic pain that was impacting on her balance and mobility. ‘She suffered a number of falls at home and got into a cycle of not wanting to integrate into the community for fear of having another fall. One thing that came up in her i-statement was her wish to get back to her hobbies, so we looked at how we could achieve that.

‘Previously she had been given medication and counselling in isolation, but this had not tackled the falls problem. ‘It was only really by going into depth on where her limitations were that the anxiety and depression was highlighted.’

As a result, physiotherapy and OT were brought in and the patient was able to access other services such as Active for Health, an NHS community-based physical activity programme. ‘This was addressing the physical issues, but also meeting her wishes to improve social integration as well. And it was key having a GP on board so we could keep linking to her medical management,’ says Mr Smith.  The i-statement approach also makes it easier to engage with patients, say the physios. ‘We can engage with people in a very different way. Now we can say “we understand that this and this has been happening”; straight away they feel that someone is interested in them, and I think that it really enables people to deal with their issues more openly and honestly,’ says Mr Pinheiro.

Says Mr Smith: ‘Simply by not having to repeat the same assessment process they feel they have been understood. It allows us to develop a rapport more easily and quickly, if we can get the patient engaged and trusting us you are always going to have a better outcome.’

Integration inevitably means having to work outside of professional silos, which for some may be a cause of anxiety in terms of professional standing, but the physios say so far the impact of multi-sector working has been positive. ‘This type of coordinated care allows people to still specialise, while also utilising the wealth of knowledge through other specialities.  As clinicians it’s beneficial to us as it’s improving our education about the services that are out there,’ Mr Smith adds.

The i-statement system also engenders more accountability among individual clinicians, ‘Because it is written down and everyone knows who is responsible for what’, says Mr Pinheiro.  For junior staff, in particular, this can accelerate professional development, notes Mr Smith. ‘Often juniors feel a bit lost within the process, with this approach they are taking ownership of their contribution and it can be a real morale booster for them, it allows them to develop clinically along with their inter-personal skills. You see them flourish as their input is really valued by patients and the wider team.’

Naturally, such a radical change in organisational structure does not come without its challenges. ‘You do spend a lot of time on an individual,’ says Mr Pinheiro. ‘You have to have flexibility to attend all the different meetings which can be a challenge, as a community therapist it can be hard to organise your diary. It is a game of competing agendas and it will take time to get used to the juggling involved.’

Mr Smith takes a stoical view. ‘The whole process is inherently complex, because people are. But what the GCC does is take that complexity under one umbrella. What clinicians start to see is a coordinated approach so that we feel we are getting somewhere, all the while the patients don’t see that complexity they see health and social care under one system.’

The Test and Learn pilot will be formally evaluated in December by Healthwatch and Public Health England. Across the borough, the GCC model has so far achieved: a 27 per cent improvement in unnecessary hospital admissions; a seven per cent reduction in clients needing long-term care; there are no longer any delayed discharges for patients over 65 and more than £1 million has been saved from the social care budget. fl

Vicky Johnston, the chair of the CSP professional network Agile, said: ‘I have no strong feelings on whether integration is a good or bad concept, and whether pooled budgets are the way forwards. It is very much dependent on how services evolve locally, and there is so much variability across England. What works in one area can be completely wrong for another.

‘As long as services are able to respond in a timely and efficient manner to meet a person’s need, and provide a quality service, then that is the most important factor.  My own personal experience is that data sharing and accessing computerised records is an area for much improvement. It is still difficult to have truly integrated electronic records across sectors such as the NHS and social care.’

Greenwich is one of 14 areas in England to receive a green light to fast-track the completion of their ‘out of hospital’ plans, the Department of Health and Department for Communities and Local Government said last month.

The announcement followed a review of the first set of local plans for the Better Care Fund. In the coming months, health and wellbeing boards – made up of councils and local health services – will be able to set their own ‘performance pot’ with a guideline reduction in unplanned admissions of at least 3.5 per cent. This equates to at least 185,500 fewer admissions a year, the announcement added.

In response, David Pearson, president of the Association of Directors of Adult Social Services, said: ‘We are disappointed that the local discretion which was at the heart of the Better Care Fund has been eroded, and that the social care indicators – generic to the conditions originally built into the fund and which brought our services centre stage – have been removed or pushed into the background.’