Vanessa Haycock’s successful leadership of an MSK service in Newcastle upon Tyne has been recognised by a CSP award. She tells Gill Hitchcock that it was all down to team effort. 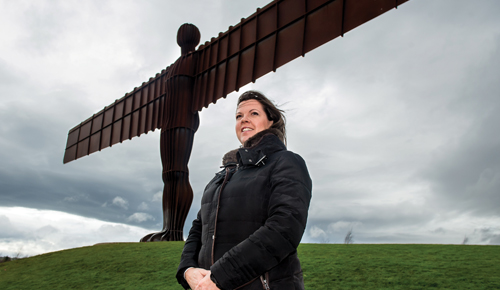 If the Oscar-tipped biopic The Theory of Everything about the life of Stephen Hawking has a key message, it’s that the physicist’s extraordinary achievements would have been impossible without the support of Jane, his first wife. Individual success is always covered in the fingerprints of other people.
And when Vanessa Haycock spoke to Frontline about winning a prestigious CSP leadership award, the head of community physiotherapy in west Newcastle for Connect Physical Health immediately mentioned the team effort that made her success possible.
‘Even though it’s a leadership award, we’ve taken it very much as a team award,’ is her view of the accolade. It recognises Mrs Haycock’s role heading a 13-strong physiotherapy team during in a six-month pilot, which began on 1 January 2011, to establish a community musculoskeletal (MSK) service in the west of Newcastle.
Setting up a health service from scratch is no mean feat, and Frontline was keen to find out what Mrs Haycock – and her team – brought to a project which continues today across nine local GP surgeries, with a total patient list of more than 77,000.

How about local knowledge?

Connect was commissioned to deliver the pilot by Newcastle West clinical commissioning group and Newcastle upon Tyne hospitals NHS foundation trust, where Mrs Haycock began her career as a physiotherapist. For the past 11 years she has been with private provider Connect, starting as a physio and then moving out of the clinic and into management. And there’s another significant local connection: Andrew Walton, Connect’s founder and executive chair, is Newcastle born and raised and qualified as a physiotherapist at the city’s University of Northumbria in the 1980s.

Richard Pell, a senior MSK physiotherapist and a member of Mrs Haycock’s team, testifies to her ‘wealth of experience in designing and rolling out new MSK services in primary care settings with Connect across the north east’. In connection to the pilot he says: ‘This was invaluable in ensuring we could work successfully in collaboration with the local clinical commissioning groups and GPs alike.’
Mrs Haycock believes that a successful service is built by ‘knowing what your patients want – and not assuming what they want’. But she adds that it was important to keep GP satisfaction high, and says she encouraged the Connect team to build relationships with GPs and commissioners.
In a message for the physiotherapy profession, Mr Walton says: ‘I would urge my colleagues to build relationships with commissioners, but you have got to build relationships over time and behave in a business-like way.
‘Commissioners are faced with enormous challenges, you have to create trust and bring evidence, examples and business cases, which demonstrate why they should invest in physiotherapy.’
He believes that one of the reasons for the success of the pilot was that Connect was able to change the behaviour of GPs: ‘We got a significant shift in GP behaviour from “I think I’ll just refer this patient up to the hospital to see a consultant”, to “actually for a lot of patients I am going to ask a physio in the practice to have a look at it”. It was that change in behaviour that shifted the flow of patients in the pathway, reduced cost and improved outcomes.’
All the physios on Mrs Haycock’s team during the pilot were new recruits, or Connect staff who were transferred internally. She describes the company’s support network for staff as ‘massive’, and says that the induction and supervision processes are particularly important for sole physiotherapy practitioners based in GP surgeries.
She says: ‘The way our management structure works is that we have the head of the service – which was myself at the time – and then we have team leaders who do a lot of the clinical supervision. I support those team leaders, who then support the staff from a clinical and an operational point of view.’

But what of Mrs Haycock’s leadership style? One of those physiotherapy team leaders is Deborah Barrett. She has worked with Mrs Haycock for a number of years and describes her as ‘very approachable. She is a good communicator and states her objectives and goals, making it very clear what each person’s role is’.
Mr Walton is keen to say that Connect has invested in adapting the common primary care software systems EMIS Web and SystmOne to record its community MSK services. He says this means that the company has electronic records which can raise the visibility of its performance, and show commissioners how their investment is used.
‘One of the problems we have as a profession is that, because we are so poor at measuring clinical outcomes, it is very difficult to benchmark quality, so we tend to focus on things like waiting times,’ he says.
‘Well, you can have a poor service with short waiting times, and you can have a very good service with long waiting times. It’s the quality of the service that’s important. And the ideal, of course, is a good quality service and a short wait.’
Connect used the EQ-5D standardised measurement of its services during the pilot, a measurement the CSP is keen to promote (see box). The change in EQ-5D results for the physiotherapy provided during the pilot was what Connect describes as ‘statistically significant’.
Mrs Haycock is continuing to lead the service in Newcastle west, which is based on a model intended to deliver more physiotherapy in the community by shifting patients away from unnecessary referrals to hospital consultants.
She was both pleased and embarrassed about her award: ‘It’s great for the company and for the team. But I didn’t see it as an individual award. I saw it as a team award really, because I wouldn’t have been able to do it without the team and my team leaders and the physios.’
It’s also great that British actor Eddie Redmayne won a Golden Globe award for his portrayal of Stephen Hawking in the biopic – but even that would have been down to a network of collaboration. Physiotherapy, film or physics, it comes down the team. fl

This management tool, used by Connect for this service, is designed to help measure how well a service is performing and its impact on patient care. EQ-5D-5L is a development of the original EQ-5D. It gives greater choice of response and is expected to be more sensitive to changes in health state than the original.
It has two parts. The first covers questions relating to mobility, self-care, usual activities, pain/discomfort and anxiety/depression.
There are five responses for each question ranging from ‘I have no problem...’ to ‘I am unable to…’. The response to each of the five dimensions is assigned a number 1 to 5 with ‘1’ representing no problem through to ‘5’ representing the most severe problem.
The five responses represent a ‘health state’. This health state is then converted via a pre-constructed table into a weighted score. It is this figure which is used in economic evaluation.
The second part asks the patient to assess their health ‘today’ on a visual analogue scale of 0-100.
The CSP says the EQ-5D-5L measure is non-contentious, easy to read and understand, and takes approximately two minutes to complete.
For more information see here.
Connect’s Newcastle west community MSK service