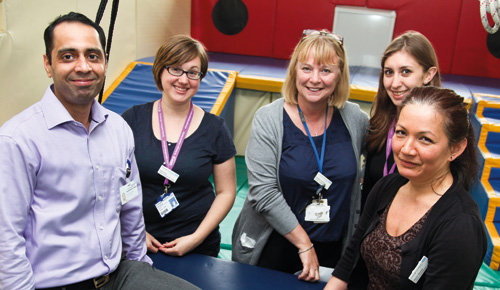 In an inspection report peppered with superlatives, Ofsted inspectors praised the staff they met earlier this year at Linden Lodge, a school for children with multi-sensory impairment near Wimbledon Common, south west London.

The Office for Standards in Education, Children’s Services and Skills report rated the school as ‘outstanding’.  It said the teamworking of physiotherapists and staff was instrumental in improving the pupils’ posture, sleeping, physical development, use of aids, mobility, communication – and much more.

Linden Lodge is a day and boarding school whose pupils, drawn from across London, have disabilities including multi-sensory impairment and learning difficulties and many have complex health needs. The school specialises in addressing both sensory and physical difficulties.

‘It used to be a school for very cognitively-able students who had visual impairments. Up until three years ago students were undertaking GCSEs and much higher level qualifications,’ says Julie Marchant, head of therapy at Linden Lodge.

‘Over the last four years, there has been an enormous shift in the types of children who are accepted on to the school roll, and lots of changes in government and pressures on special schools.  We take on children who are more and more complex in their presentation.’

Mia Dodsworth, the head of primary, says teamworking underpins everything that happens at the school: ‘There is such as large team that works with any one child.

‘So you are talking about a class teacher, a degree of support or one-to-one support, then therapies that link into that. The majority of our pupils have speech therapy, physiotherapy and occupational therapy (OT) as part of the package of care.’

An increasing number of the pupils need physiotherapy: ‘We are always saying that we don’t have enough physios here,’ she says.

Working in partnership with parents

Paurooshasp Pardiwala is the only full-time member of a physiotherapy team of six, who are all employed by the local St George’s Healthcare NHS Trust to work at the school. The others are band 6s and 7s who specialise in musculoskeletal and neurological physiotherapy.

Mr Pardiwala, a paediatric physiotherapist who qualified in India before completing an MSc in neurological physiotherapy at Sheffield Hallam University, says the physiotherapists’ work with a child starts with an individual assessment.

The mix of staff at an assessment will vary depending on the needs of the pupil, but can include teachers, physiotherapists, speech and language therapists, OTs and ‘intervenors’ who provide one-to-one support.

‘We observe the child functioning in environments, such as the classroom and the playground, which gives us an idea of the child’s level of ability. From there on we get in touch with the parents to see what goals they have in mind and work with them towards those goals,’ says Mr Pardiwala.

‘We also devise a physiotherapy programme of activities to help the child achieve the goals. And part of our job is to empower the school staff and skill them up so they can carry out those activities in the child’s day. The aim is for children to receive therapy as part of a 24-hour curriculum.’

During school holidays the physiotherapists make progress checks on the children at home. ‘The parents always appreciate the more ideas we can give them to help make the progress faster and better,’ says Mr Pardiwala.

Occupational therapist Clare Sugarman is very positive about the multidisciplinary team working at Linden Lodge: ‘We sit in the same office as the physiotherapists and everything seems to flow between us.  If I am doing sensory work, then actually that’s a really nice opportunity to work with physios around moving on and off the floor and using “therapy boards” for sensory calming activities.’

The physiotherapists help to assess equipment used to maximise the child’s participation in the curriculum, such standing or walking frames and positioning systems.  Linden Lodge’s head of mobility Joyce Allison explains that there is a lot of teamworking around how wheelchairs can be used to boost independence, including as part of an independent living group for children in their last two years at the school.

Asked about the challenges of his job, Mr Pardiwala says these are about developing his skills and growing the physiotherapy service. He thinks it would be helpful, for example, to be trained to inject botulinum toxin.   This is currently administered off-site in hospitals during relatively short appointments. But his role at the school gives him the advantage of observing and assessing a child in different functional environments over periods of time, and he believes that he could inject botox as part efforts to reach the functional goals of individuals.

Being employed by the NHS brings the benefits of continuing professional development. Members of the physiotherapy team attend study days and seminars run by the CSP professional network the Association of Paediatric Chartered Physiotherapists.

‘This provides an invaluable opportunity to discuss case management with other professionals, and helps ensure that every treatment option has been explored.   We also attended external courses covering topics including gait analysis, orthotic management and hydrotherapy,’ Pardiwala says.

School visits by an orthopaedic surgeon from St George’s Hospital and orthotists from the nearby Queen Mary’s Hospital in Roehampton are other benefits of a relationship with NHS services.

But the separation between the NHS and the school brings challenges, including record keeping. ‘For the NHS we have to use Rio, where we put all our clinical notes, but the school doesn’t have any access to them, which leads to a duplication of work,’ says Ms Marchant.

‘And now that we have children at the school who have very high medical needs, we are having to link with our acute counterparts at St George’s. This is a challenge, because they use different communication systems.’

Funding is a growing problem. Two years ago, the local boroughs where the children live usually had sufficient money for the one-to-one support some pupils need. Increasingly, however, they are looking to the school to provide that high level of support from its existing budgets.

The physiotherapy team has been affected by the loss of two full-time multi-therapy assistant posts since 2011. ‘Two full-time posts is a lot,’ says Mr Pardiwala. ‘So we’ve had to give more responsibility to class staff, who already have a lot of responsibility.’

The children at the school are aged from two up to 19 years and Ms Dodsworth is very concerned about the growing problem of where they go after they leave. She says that a lot of specialist colleges do not have the facilities or capacity to take on former Linden Lodge students and day centres are being shut.

A flavour of the Ofsted view of Linden Lodge in 2014 is that the school is ‘fantastically’ resourced. Staff make ‘excellent’ use of the ‘wonderful’ on site resources, and there is a ‘fantastic’ range of activities. But there are storm clouds on the horizon.

‘In the next two to five years we have to think about where the school is going and how we are going to cope financially, because it’s very, very grey as to what the new reforms to special educational needs will mean,’ says Ms Dodsworth.

A charitable trust, set up in 1980, raises funds for ‘extras’ not covered by statutory funding, such as the play equipment, music lessons and schools trips applauded in the recent Ofsted report.

But Mr Pardiwala believes fundraising will have to extend beyond the scope of ‘extras’, to finding money for ‘essentials’.

He is already seeing this at two neighbouring special schools where physiotherapists are fundraising for essential services.  ‘Linden Lodge will have to do similar. Definitely,’ says Mr Pardiwala. fl