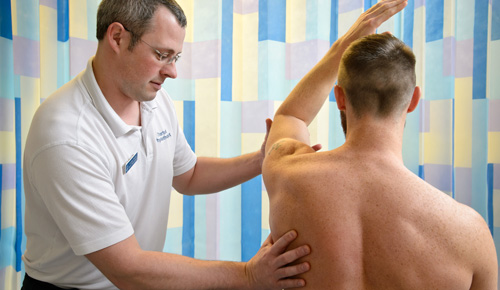 Mr Hulse is the physiotherapy team lead at the Robert Jones and Agnes Hunt Orthopaedic Hospital NHS Foundation Trust, which is based in Oswestry. He says: ‘Promoting physiotherapy to staff means they can, in turn, promote it to their patients.’

Indeed, Mr Hulse believes the ‘Raising the Profile of the Profession’ CSP award that his team picked up at a ceremony last autumn also helped to ‘spread the good message’.

It is nearly four years since the orthopaedic hospital introduced self-referral MSK physiotherapy services for staff, after the physiotherapy and human relations (HR) teams acted to reduce the number of sick days taken due to MSK problems.

Since then 250 members of staff a year have received in-house physiotherapy treatment and screening for potential movement problems.

They no longer have to visit their GP or consultant to seek a referral for physiotherapy; instead they visit the trust’s intranet and hand a self-referral form into the physiotherapy department.

Another advantage is that they can access appointments at short notice when NHS patients have cancelled theirs. This also means time isn’t wasted and slots go unfilled.

Ruth Tyrell, the trust’s associate director of HR, says: ‘We had higher sickness levels than we wanted and we looked at the causes of these. One of the biggest month-on-month was MSK conditions.

‘This analysis came at the same time as the push from the physiotherapists who were saying that they would like to offer this service. So the trust piloted it and we put in some funding.’

According to the trust’s figures, overall sickness rates among its 1,200 employees have fallen from more than four to 3.3 per cent and about £250,000 have been saved so far in reduced sickness absence-linked  MSK disorders.

Mike Delahay, senior physiotherapist at the trust, says the number of sickness days began to fall as soon as the self-referral scheme was introduced.

‘It’s a question of speed, really. The quicker we can begin treatment, the quicker people get better,’ he says. ‘The service allows staff to refer themselves directly for MSK physiotherapy treatment and they are usually seen by us within a week.’

The idea for the service, says Mr Delahay, came from the 2009 Steve Boorman report titled NHS Health and Wellbeing, and the trust’s own health and wellbeing strategy.

He says he used data and information provided by the CSP and Boorman report, the work of CSP member Lesley Holdsworth, allied health professions director at NHS 24 in Scotland, and CSP Psysiotherapy UK presentations to make the case for the service.

‘Before this started, staff were taking time off sick and being referred by their GP for physiotherapy and being seen within four to eight weeks,’ he says. ‘This risked them developing longer-term conditions because they are seen and treated much later.’

Raising the profile of physiotherapy

Staff who refer themselves to the service are seen an average of three or four times and the ‘staff as patients’ and the physiotherapists are ‘exposed’ to colleagues they would not normally meet.

As a result, Mr Delaney believes, the profile of MSK physiotherapy is higher than it has ever been throughout the trust and this has a positive impact on patients because other staff groups realise the value of physiotherapy.

In order to generate staff interest in the scheme, the physiotherapy and HR teams produced posters that are displayed across the trust along with providing all of the hospital’s departments with referral forms.

Although it was difficult to secure funding initially, Ms Tyrell says that the drop in sickness rates means the trust board is now ‘really behind the service’.

The HR chief adds: ‘We publicise the service to managers who can refer and fast track their staff to the service.’

Staff who are referred have the full range of services, as would any other patient, including ‘drop in sessions’ at a hydrotherapy pool and gym intended to engage patients in lifestyle change around health and wellbeing rather than just treating their condition.

‘The majority of staff we see are either nursing or admin staff,’ Mr Delahay says, but the team also sees a whole range of staff from doctors to cleaners.

‘Ultimately, we hope that the service will benefit patients because they will see the same staff and a consistency of care provides for a better patient experience.’

Using the tool allows interventions to occur before the staff are aware they have an issue and can save on potential MSK pain and workplace absence down the line.

Mr Hulse sees the scheme as pioneering: ‘I know of no other NHS hospital staff self-referral scheme that is utilising functional movement screening.’ fl

Last year, he volunteered to run the London Marathon on behalf of the trust to raise money for its Oswestry Bone Cancer Centre appeal. ‘I began training straight after Christmas to run the marathon in April, but about six weeks before the marathon I developed a problem with my left knee,’ Mr Biggs explains.

‘I had lateral joint pain and self-referred to the trust’s musculoskeletal physiotherapy service where I was seen by one of the trust’s sports physiotherapists within a matter of days.’

He was diagnosed with iliotibial band syndrome and says that the band running from his knee-joint to his pelvis had swollen: ‘It happened because I had been over-training.

I had five sessions with the sports physiotherapist once a week during my lunch break and we came up with a plan to get me through the marathon.’

Mr Biggs says that if the trust’s self-referral physiotherapy service did not exist he would have been forced to see his GP to get a referral to physiotherapy which would have taken much longer and would have meant he could not have run the marathon.

‘However, I managed to run the marathon, raise money and I didn’t suffer while I was running it – which was quite remarkable.’

He says he had heard about the scheme through the advertising emails that had been sent to all staff and that it was easy to download the self-referral forms from the trust’s intranet.

‘I would really recommend the service to others as it is a specialist team that offers you treatment within days of your referral,’ he adds.