Fair pay for quality physio: join us at the TUC-led rally on 18 October 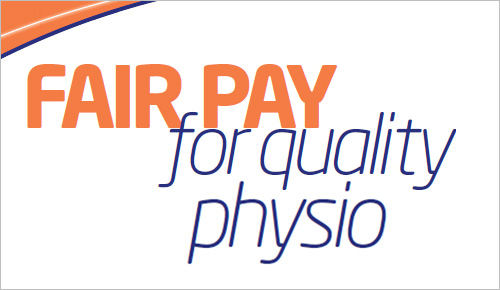 Join us at the TUC-led rally on 18 October

It was brilliant to join members outside St Thomas’ Hospital in London as they stood up for their pay last month (Frontline, page 13, 16 June).  Together with thousands of staff across the country, physios and support workers staff are battling for fair pay. If we campaign together as staff with our unions, I believe we will succeed.

That’s why I’ll be there with the CSP in London on Saturday 18 October at a TUC-led national rally. Thousands of us will demonstrate against the austerity measures and call for a fair recovery for all.  Our call for an alternative programme will be delivered to decision-makers at all levels. Above all, we want to get the message across to the government and political parties which will want our votes next year.

I hope as many CSP members as possible will be there too.  The more of us who go, the bigger the impact we can make. And there’s a strong common interest in us securing a decent pay rise – not just in 2014 but in the years to come – for physiotherapy employees in all sectors and millions of other workers across the four UK countries.

We need to be rewarded properly for the fantastic work we do on behalf of patients. Whether you are an allied health professional, a nurse, a porter, or work in local government, transport or in a business, fair pay is critical to building a sustainable recovery in the economy.

The coalition government tells us that Britain is recovering, with the economy growing again. But most people don’t feel it, apart perhaps from a minority  in south east England where there is a new housing price bubble, fuelled by a return to six digit banker bonuses in the City.  The same factors fuelled the financial and economic crisis in 2008, from which we have yet to recover.

The figures show that the share of the national wealth produced by workers that is returned to them in the form of wages has been falling steadily over three decades.  Wage inequality has also widened dramatically, with millions being forced to take jobs with poorly paid zero hours contracts or with fixed-term or part-time contracts. We also have some of the weakest job protection legislation in Europe.

Decent wages mean more tax receipts for the government, giving it more money to invest in public services like the NHS.  Fair pay is also good for local economies as it means people are able to put down firmer roots in their communities and middle and low income earners spend more on locally produced goods and services.  A living wage means less dependence on benefits, creating savings for the public purse.

As well as a pay rise, Britain needs a fairer taxation system to ensure those with the broadest shoulders make the biggest contribution (see link to Robin Hood Tax campaign below).  A fairer system is important for our patients because poverty causes ill health. Having a vibrant economy is also important for members, whether you are employed or an independent practitioner.

Meanwhile, we need an economy that is greener, more geared towards making things rather that speculating in unstable financial markets, while responding to the challenges of climate change.

We should be looking to public services and smarter public procurement policies to play a key role in achieving a fairer, more sustainable, Britain. We need a system that’s not at the service of a tiny elite but one that works for the majority, including CSP members, our families, our communities and our patients. fl

What’s the fair pay campaign got to do with me?

Why the campaign for an alternative to current economic and social policies matters to every CSP member.

Austerity policies are hurting businesses and not-for-profit organisations as well as the public services.

A new deal based on a fairer distribution of prosperity across society and a focus on collaboration to drive up standards rather than on cut-throat competition should benefit everyone.

We are not just fighting for today’s workers but for fair pay and quality employment for tomorrow’s generation as well.

We need investment in quality services and, crucially, in the people who will deliver them over the longer term. Come along on 18 October – our new chief executive Karen Middleton intends to be there, alongside many members.

‘Well, it will be boring’

No! Any CSP member who has attended a TUC-led demonstration will tell you there is a carnival type atmosphere with bands along the way, banners and fancy dress.  These are very safe events with many marchers bringing along their children, grandparents or even dogs!   The rally in Hyde Park will have inspirational speakers, comedians, live music and food stalls.  We’ll have flags and some giant inflatables, but bring your own placards, banners, badges as well as chants and slogans.

The CSP has limited funds to provide some help to cover reasonable travel on a first-come, first-served basis.  Pledge your attendance, including full name and a mobile phone number, by emailing: oct18@csp.org.uk; For more information, including guidance on affordable transport options see Britain needs a pay rise.