In our regular round-up of research, Janet Wright looks at how exercise before lung surgery improves quality of life, and how robots lend a hand with MS rehabilitation. 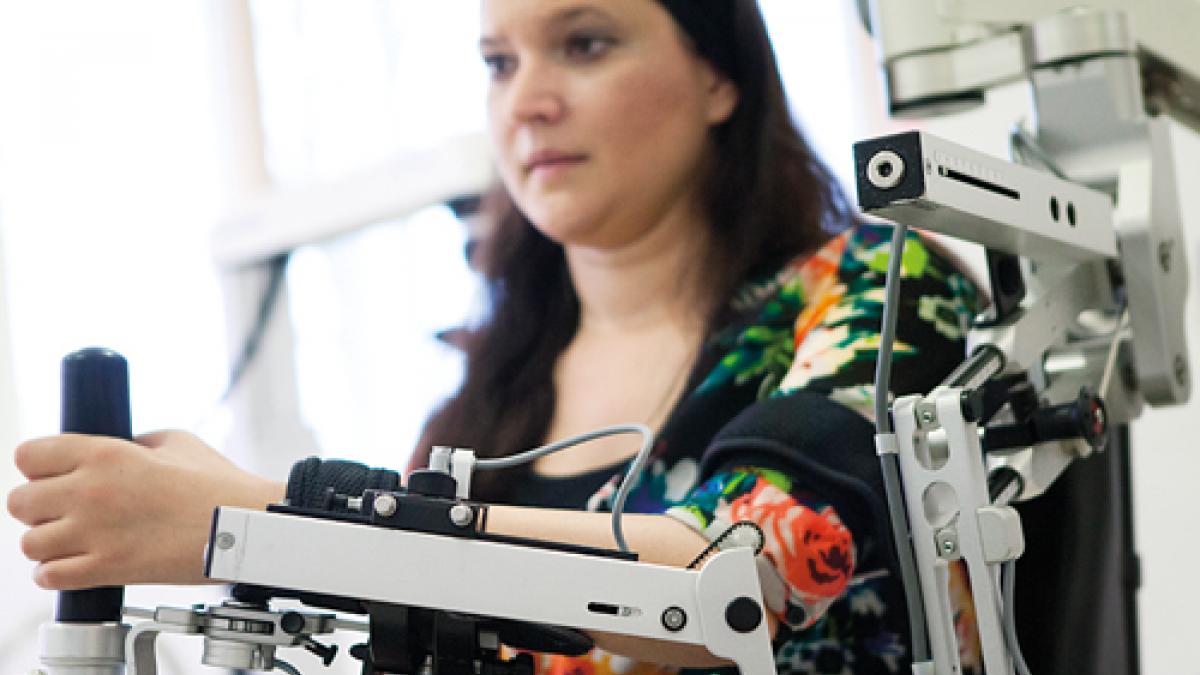 People with lung cancer can benefit from taking exercise before an operation, say researchers. But further work is needed to fine-tune programmes for the best effects.
A team in the Netherlands reviewed studies of preoperative exercise therapy (PET). They were looking for its effects on patients’ aerobic capacity, physical fitness, postoperative complications, length of hospital stay, quality of life and recovery.
They found 11 suitable published studies, but with varying quality and covering too many different interventions to provide a clear picture.
‘The most important finding of this systematic review was that PET based on moderate to intense exercise in patients scheduled for lung surgery has beneficial effects on aerobic capacity, physical fitness and quality of life,’ say the authors.
They also found that the programmes might reduce postoperative complications and length of hospital stay.
The team calls for researchers to compare the timing, duration, intensity and form of exercise used in different programmes. They also recommend developing tailored programmes and investigating how patients’ other illnesses might affect the results.  Pouwels S et al. Preoperative exercise therapy in lung surgery patients: a systematic review, Respiratory Medicine 2015.

A combined programme of exercise and cognitive behaviour therapy (CBT) can help older people tackle their fear of falling.
Tzu-Ting Huang, of Chang Gung University school of medicine in Taiwan, and colleagues noted that fear of falling is common among residents in long-term care facilities.
They divided 75 nursing-home residents into three groups: one was taught CBT techniques and carried out exercises; another had only CBT. A control group had no special treatment.
Participants were assessed during the study and at two months and five months after treatment ended. Both the combined and the CBT-only group reduced their risk of falling compared with the control group. But those in the combined programme were less frightened of falling and more mobile.
‘The results suggest that the combination intervention helped elderly residents manage their fear of falling and falls, decrease their depressive inclination, and enhance their mobility and muscle strength,’ the authors conclude. Huang TT et al. Evaluation of a combined cognitive-behavioural and exercise intervention to manage fear of falling among elderly residents in nursing homes, Aging & Mental Health 2016.

Different techniques can help people with multiple sclerosis (MS) improve the use of their arms and hands, researchers have found.
Ilse Lamers and colleagues at Hasselt University in Belgium did a systematic review of studies covering upper-limb rehabilitation for people with MS.
The team found 30 suitable peer-reviewed studies using a variety of rehabilitation strategies at different intensities. Half of these investigated the effects of a specialised upper-limb training programme, while the others worked on the whole body.
The most commonly used strategies were robot-based and multidisciplinary rehabilitation. These were found to improve upper limb capability. Strength and endurance training improved the upper limb structure but did not improve performance.
‘Further research is necessary to compare directly the effects of different rehabilitation strategies and to investigate the optimal therapy dosage according to the upper limb disability level,’ the authors conclude.
Lamers I et al. Upper Limb Rehabilitation in People With Multiple Sclerosis: A Systematic Review, Neurorehabilitation and Neural Repair 2016.

Commuters who walk, cycle or catch public transport to work have significantly less body fat than car-drivers, say researchers. They analysed data on more than 150,000 people from UK Biobank, a large observational study of people aged 40 to 69. Flint E & Cummins S Lancet Diabetes & Endocrinology 2016.
Older people in England are living longer, in good health and with less cognitive impairment, than 20 years ago. They are spending more years with mild (but not severe) disability, data from studies carried out in 1991 and 2011 reveal.  ‘Reduced mortality from coronary heart disease and stroke will have contributed to increased life expectancy,’ say the authors of the study, funded by the Medical Research Council. ‘Prevalence of sensory impairments (hearing and sight) and cognitive impairment have likewise reduced.’ However, obesity and arthritis have become more common.Jagger C et al. Lancet 2016 - open access.
People with knee osteoarthritis who wore a pulsed electromagnetic fields (PEMF) device in a month-long trial had a significant reduction in pain, while improving their pain tolerance and physical health. Eight of the 30 participants using the PEMF device gave up their pain medication, compared with one in the placebo group. Bagnato GL et al. Rheumatology 2016 - open access.
T’ai chi can reduce the risk of stroke in middle-aged or older people, say the authors of a meta-analysis of 36 studies covering 2,393 participants. The slow Chinese exercise was associated with a reduction in risk factors such as weight, body fat, blood pressure, cholesterol and blood glucose level.  Zheng G et al. Evidence-Based Complementary and Alternative Medicine 2015 - open access.