Dying to help: Counselling and support for physios following the death of a patient

In a second article on dealing with death, Janet Wright finds out how support systems help physio staff cope. 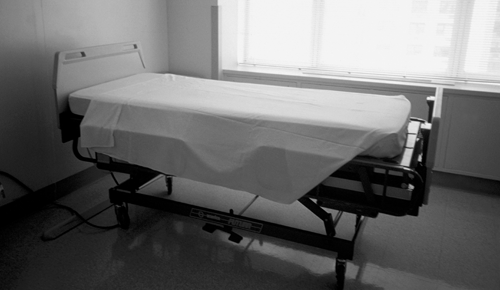 Physiotherapists often have little training to prepare for the death of a patient
Physiotherapists are used to helping people recover from whatever life has thrown at them. So it can come as a painful shock when a patient dies.
‘It was horrible,’ says one band 7 physiotherapist, about the night she was called to an emergency. ‘The patient was a man with motor neurone disease, who was fully compos mentis throughout,’ says the physio, who asks to remain anonymous.
‘We could see the panic and fear in his eyes. We were watching him slip away. The registrar and I kept on working for an hour, but eventually we had to give up.
‘He had been due to go home the next day. I went home thinking could I have saved him if I’d been called earlier? Could I have done more?’
It’s an event for which physiotherapists have little in their training to prepare them. ‘At university I had a half-hour lecture on death,’ says Emily Stowe, a committee member of the Association of Chartered Physiotherapists in Oncology and Palliative Care.
‘Some people left in tears,’ she recalls. ‘It was all a bit dramatic and I don’t think I felt at all prepared to deal with it.’
As day therapy manager at St Clare hospice in Essex, Ms Stowe has seen many deaths. The ending of a young person’s life in particular is hard to deal with.
‘A lot of staff have children of that age, so they find it really difficult,’ she says. 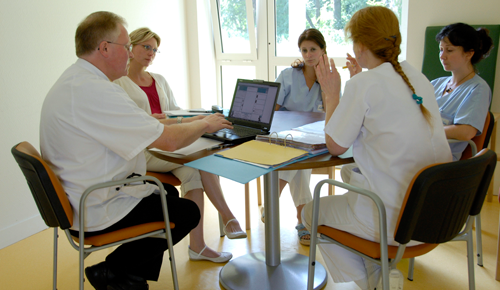 It’s not something that healthcare professionals should need to deal with alone. The NHS and health charities such as hospices recognise the pressure on staff.
At Bristol Royal Infirmary, for example, respiratory pathway lead Ema Swingwood finds the trust’s counselling team ‘fantastic’. Her cystic fibrosis team benefits from seeing a counsellor regularly, rather than waiting for a crisis.
And Andrea Wood, an intensive care physio at the Royal Hospital for Sick Children in Edinburgh, notes that, as well as counselling, her hospital offers very good chaplaincy services.
However, access to staff counselling services may vary widely from one trust to another. Staff at NHS Lothian recently complained of waiting up to two months for an appointment.
After her unsuccessful efforts to save the man with motor neurone disease, the physio who asked to remain anonymous, wasn’t offered any support. ‘There’s a hole in the services when you need them, then and there,’ she says.
‘If you’re working as part of a team and this happened in the daytime, you’d hope someone would sit down with you with a cup of tea and support you. But on call, you just go home, and what if you haven’t got anyone at home to talk to? If it happened to a junior that would be very distressing. They might lose confidence about going on call again.’
Some hospitals have set up a buddy system for on-call staff to ring out of hours. But, asks the anonymous physio, ‘are you really going to call a colleague at 3am to offload, when you know they’re working the next day? I wouldn’t.’
Ema Swingwood tackles this problem by contacting the on-call physio as quickly as possible after a death.
‘I make myself available to speak to them as and when they feel they need to,’ she says. ‘Some will think they are fine but then struggle, a couple of patients into the day. I always make sure they realise the situation was not their fault.’

Working in a hospice, where deaths are frequent, might seem most challenging of all. But it’s also where staff needs are most likely to be met.
‘In my experience, there is much more support available in a hospice,’ says Maggi Hardcastle, clinical specialist physiotherapist at Rowans Hospice in Purbrook, Hampshire.
All new staff at Rowans take a day course on working with loss, which includes communication training, she reports. Staff have regular supervision, and access to clinical psychologists if needed.
But there’s nothing to beat the support of colleagues. At the Royal Hospital for Sick Children, for example, some wards such as oncology invite the multidisciplinary team to join in a debrief after a patient dies.
‘This works really nicely,’ says Ms Wood. ‘Everyone can share their feelings and discuss the case, what went well and what didn’t.’
Ms Swingwood finds that physios look after each other as well as patients. ‘In all the trusts I’ve worked in, I have always felt supported when patients have passed away,’ she says. ‘I do think that as physios we are sensitive to our colleagues’ feelings.’
People with chest disease are most likely to die in hospital, so respiratory physios see more than their share.
Ms Swingwood, who is an education champion for the Association of Chartered Physiotherapists in Respiratory Care, makes sure the team has a chance to debrief afterwards.
‘If it’s a patient who’s been with us for a while and is therefore well known to the team, I would do an en-masse team debrief initially, and then offer one-to-one sessions for anyone who feels they want to discuss further,’ she says.
‘I encourage all of my band 7s to do the same with their teams, but also to monitor which physios are seeing which patients – and if someone is seeing a poorly patient for a while, always to offer chances to share the emotional burden.’

When a long-term patient dies, Ms Swingwood tries to ensure that physios who want to attend the funeral can do so.
‘Some other managers were initially concerned what impact this would have on caseloads, or that our help might be abused,’ she notes. ‘I have not found this at all – and believe it to be an important part of the grieving process for staff that helps to give them closure.’
Where the immediate support isn’t enough to help, though, staff may need to seek out other options or press for better facilities. If you don’t feel you’re being adequately supported, ask your CSP representative for advice.
‘It can be helpful to develop your own strategies,’ says CareSearch, the palliative care knowledge network. ‘For example, attending a death and bereavement review where the person’s care and death is discussed, or saying goodbye to the patient after they have died, whether physically or in your mind.’
‘The point of us being here is to help people,’ says Ms Stowe. ‘And, most of the time, there’s some solace for us in knowing we’ve made it easier for them.’