An overview of pre-registration physiotherapy Masters study, two-year, accelerated programmes of study, which build on prior learning and experience to provide students with the knowledge and skills necessary to practice physiotherapy. 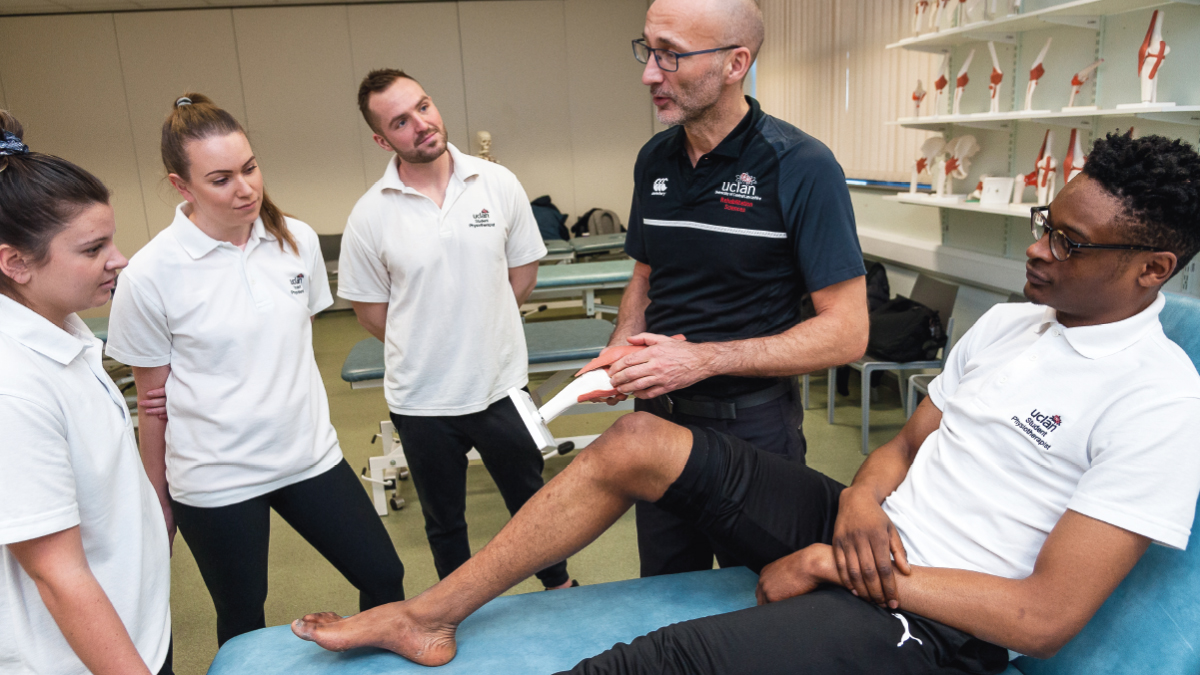 Pre-registration masters offer a less traditional route into a physiotherapy career, and, two decades after they were introduced, are the chosen course of study for half of new entrants to the profession. Jennifer Trueland explains.

It wasn’t so long ago that anyone who wanted to take up a career in physiotherapy would apply automatically to do a BSc course. This was the case whether they had just left school or had already completed an undergraduate degree in another discipline.

Towards the end of the last century, however, new routes into the profession began to open up, and now prospective physios have a number of options, from degree apprenticeships to pre-registration doctorates. Looking at today’s newly qualified physiotherapists, the innovation that is having the biggest impact (in terms of numbers at least) is the pre-registration master’s degree (MSc). This is a two-year course open to people who already have degrees in another subject (usually, but not always obviously relevant, such as biosciences or sports science). Career and life experience is also taken into account. Students on the MSc will develop the same physiotherapy competencies as those on the BSc course, but will also be expected to work at master’s level, which – in general terms – involves more emphasis on critical thinking, analysis, research, and academic writing.

Having been around since the middle of the 1990s, it’s not quite the ‘new kid on the block’, and from small beginnings, it has grown to the point where it now accounts for almost half of new entrants to the profession, according to CSP head of learning and development Nina Paterson. This is because although the cohorts tend to be smaller, the fact that the course is run over two years rather than the BSc’s three (four in Scotland) means there is greater throughput from the MSc route.

The first courses were developed partly in response to a need for more physiotherapists, and to improve the diversity of the profession by widening access, says Paterson, but this soon evolved. ‘The initial intention was to create an accelerated route through, which worked really well for workforce development because rather than taking three years, it took two years and a bit,’ she says. ‘But I think as health and social care has become more complex, in terms of healthcare environment and the needs of patients and services, these pre-reg master’s degrees have become a fantastic option to take somebody who has life experience and a previous degree, to build on that and take them to a point where they can really think critically about themselves, and about themselves as a healthcare practitioner, about the healthcare world that they’re going to be working in. The master’s programmes really focus on that criticality and develop that critical thinking. When they [graduate] they are still novice practitioners, because they’re new to the workforce, but they should have come out with the ability to think and to question and to critique. That’s not to say that the BSc doesn’t develop those skills, but the master’s course has been really popular with managers and with physios themselves; they can really hit the ground running.’

Kenneth Chance-Larsen, course leader for the pre-registration MSc in physiotherapy at the University of Central Lancashire (UCLan), says applications have far outstripped available places. ‘There’s been strong interest from lots of people from the traditional [disciplines] such as sports therapy, but also other backgrounds,’ he says, adding that applicants have included people with degrees in psychology, behavioural sciences, nutrition and even an MA in history. ‘If you come in without some understanding of anatomy and physiology and research methods it’s a steeper learning curve, and we make them aware of that. But when they reach the threshold competence level, they come out not just with the physiotherapy profession-specific attributes, but also their previous experience.’

Graduates will typically start with a band 5 NHS job – the same as BSc graduates. But there is anecdotal evidence that they will be at an advantage in terms of career progression, particularly as some posts at higher bands require an MSc.

Like most of the integrated pre-registration MSc courses, UCLan’s uses case-based learning, meaning that students are expected to work together on scenarios to decide what needs to happen in a particular situation with a patient. Apart from anything else, this fosters effective group work, he adds. The course also promotes the value of research, and creates a cohort of physiotherapists who are research literate, with some going on to make it part of their careers.

For those for whom research is an even more central interest, there is also now an option to take a pre-registration doctorate in physiotherapy. Offered by Glasgow Caledonian University (GCU), this course combines the development of clinical and academic skills, hopefully creating a new breed of highly qualified physiotherapists. GCU pioneered the pre-registration MSc, taking its first students in the mid-1990s, explains programme director Shiv Shanmugam, and used its extensive experience in developing the doctorate option (see InProfile page 12).

Gill Rawlinson, CSP assistant director for practice and development, says the pre-registration courses open up the option of physiotherapy to a wider range of people. ‘People who didn’t maybe get the traditional A-level results [to study physiotherapy first time around] now have the opportunity to apply having perhaps done a different degree. They’ve gone and got some different experience and different skills and now they’re coming into the profession by a different route, which is good for us.’

The courses are ‘incredibly intensive’ and ‘not for the faint-hearted’, she adds. ‘They are for a certain group of students that are very focused. They’ve decided they want to do physiotherapy, often giving up other careers. I’m not saying they’re more committed than other students, because I don’t think that’s fair, but they do require a very high level of commitment and drive, and they bring that into the profession.’

This is certainly the case with Nick Flanagan. Having initially studied sports rehabilitation, he studied the pre-registration MSc in physiotherapy at Teesside University, finishing in January 2019. He is now thoroughly enjoying life as a rotational band 5 physiotherapist with South Tyneside and Sunderland NHS Trust.

‘Doing the master’s was definitely challenging, but overall, I really enjoyed the experience. Being that little bit older I made the most of other opportunities. So for example, I did a student leadership programme which was a massively life-changing experience for me in personal and professional development. I also applied for funding to go to Canada to the international forum and as a result of that, I’ve had research published. There have been loads of opportunities.’

He hopes eventually to specialise in HIV rehabilitation, and thinks that research will remain part of his career. ‘I love working clinically – I really enjoy the direct interaction with patients. But I find that research is something that informs your clinical practice; it gives you a deeper understanding and you feel you’re on the cusp of something new. When you find something through research, you’re bringing that to all of those patients – they’re very closely linked.’

This combination of research and clinical practice is, of course, at the heart of the MSc route. ‘With the master’s, you have to become competent in clinical practice the same as pre-registration students at undergraduate level. But your academic skills have to be at master’s standard. You have to work harder to get those marks in research and academic skills. It does prepare you better for research than what I experienced in my undergraduate degree. You have to work that little bit harder; you have to understand how to do more through research, and you have to be able to interpret things differently. You get that insight from working at master’s level.’

From PA to physio

With a first degree in international relations, and several years’ experience as a personal assistant and businesswoman, Danielle Kileff is not perhaps the most obvious candidate for a career in physiotherapy.

But now, 18 months into the integrated pre-registration master’s course at the University of Central Lancashire (UCLan), she is relishing the challenge.

‘When I was at school, I didn’t really know what I wanted to do; it’s quite a young age to be making such a big life decision.’ After graduating, she started working for a consultant dermatologist who also had a number of other business interests. Although she really enjoyed the work, it didn’t feel like something she wanted to do for the rest of her life, and she decided that physiotherapy was for her.

‘It was a decision that took a long time to make,’ explains Kileff, who is 30. ‘There was quite a lot of risk involved in changing careers and going back to university, especially when you’ve got a mortgage and bills to pay. But when I was working for a doctor I was always more interested in hearing about his patients, and his experiences and challenges than I was in my own work. I was envious of the environment that he worked in, and that he had a patient-facing role.’

She initially applied for the three-year BSc course in physiotherapy, but was encouraged to go for the accelerated MSc, although her educational background was arts rather than sciences - something that she says has both advantages and disadvantages. While students with a science degree started with a greater knowledge of anatomy, for example, she had other skills. ‘Doing international relations develops a mindset that prompts you to question everything, to keep an open mind, and to look at things from different angles. This is something that the [physiotherapy] course is quite big on - don’t just look at a patient.’

When she finishes her degree, she hopes to get a job with the NHS to experience different areas of physiotherapy, although she is currently drawn to working in an MSK or women’s health role. ‘I’m also keen to stay involved in research, which is something you can do when you’re working in the NHS. There are so many opportunities and I’m glad I took the risk.’