A centralised service based in Manchester is improving provision for local people with metastatic spinal cord compression. Gill Hitchcock reports. 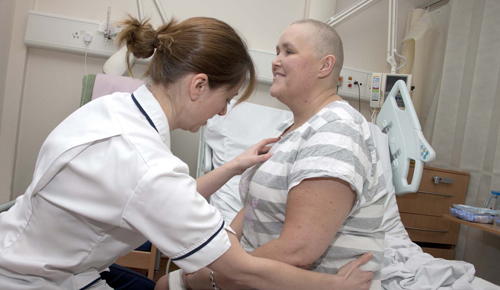 Neuro-oncology physio Kristina Coe with a patient at The Christie
Every month Kristina Coe sees about 10 patients with metastatic spinal cord compression (MSCC). The neuro-oncology physiotherapist at Manchester’s The Christie NHS trust says that a couple of years ago it would have been only about three. ‘As cancer treatments get better and people live longer, incidence is increasing and we are getting better at recognising it.’
What is metastatic spinal cord compression?

The improvement is down to a number of initiatives. A key one was the appointment of a dedicated MSCC coordinator to serve the trust and the other 12 hospitals that make up Manchester Cancer. This treatment network covers a population of three million across Greater Manchester and parts of Cheshire.
Lena Richards had been an oncology physiotherapist at The Christie for more than 20 years. In September 2013 she was appointed as the trust’s first MSCC coordinator. Ms Richards’ initial remit was to plan and set up a central point of contact for the hospitals, and to coordinate the management of all patients suspected or diagnosed with MSCC – all within two months. Starting the service from scratch and within such a tight time frame was a huge challenge and Ms Richards says that, at times, she felt overwhelmed.
‘There are so many aspects to this service, including audit, triaging patients, education, developing guidelines and pathways,’ Ms Richards says. She found she had to update stability guidelines to make the whole mobility process clear to clinicians. ‘I made the guidelines more prescriptive, made flow charts. All these big projects, when you feel swamped by phone calls, you think “how am I going to have time to write the information that I need to share with the team?”.’
But Ms Richards, supported by a colleague, introduced a care pathway as well as guidelines for the network. These say that all patients presenting with back pain that is unrelenting and unresponsive to medication, need urgent assessment to rule MSCC out – or in. The guidelines say that patients with suspected MSCC should be placed in flat bed rest and log rolled on admission, until radiological evidence and clinical findings suggest otherwise. And patients should be referred to a physiotherapist within 24 hours of admission. 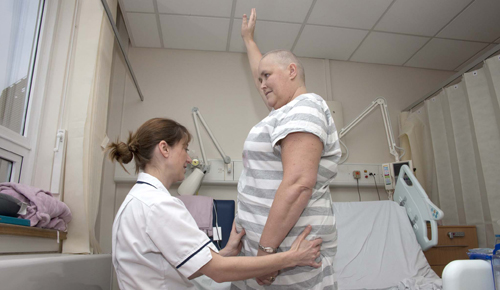 Ms Coe can now spend more time with patients
‘When patients are admitted with suspicion of cord compression we don’t know whether the spine is stable or not until they have an MRI scan. Physios are very good at neurological assessment, at understanding pain and have a very important role in the early stages of assessing that patient,’ she says.
A key part of the coordinator role is providing a telephone advice service for clinicians who suspect a patient might have MSCC. Early diagnosis, treatment and rehabilitation for people with this condition are essential to preventing paralysis.
80% of patients deemed not to need surgery received radiotherapy within 24 hours

Susan Greenhalgh is a consultant physio at Bolton NHS foundation trust, part of the Manchester Cancer network. She values the phone service, saying it delivers instant access to expert advice and support. ‘If you are seeing someone who has a history of cancer, [the service] has access to all the previous details that we might not have.
‘They might be able give you advice related to how to manage that patient, confirm that where you want to manage them is correct. They might be able to access the patient’s oncologist, for example. There’s a host of support they give surrounding the phone call to assist you in making the right diagnosis and organising the right management.’
Delivering training aimed at better awareness and management of MSCC patients is another aspect of Ms Richards’ role. ‘A great variety of healthcare workers may come across patients in any setting who are at risk of developing cord compression. Feedback from the education that’s already been delivered shows that staff in general have a better understanding of the management of spinal cord compression and feel much more confidence in handling patients in a timely way throughout the pathway,’ she says.
Live education sessions are complemented by online resources on the Christie’s website. They are intended to give an overview of the coordinating service and provide access to publications, such as the pathways for suspected and confirmed MSCC, and to a ‘red flag’ system to help identify early warning signs. 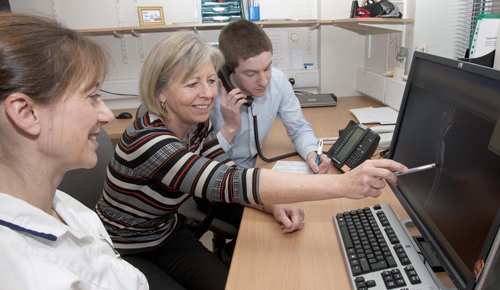 Physios Kristina Coe and Lena Richards with Conor Fitzpatrick, a specialist radiographer at the MSCC service
Ms Richards says her role is ‘unique’. First, because she is the only dedicated MSCC coordinator in the UK – others take on the function in addition to existing work. Second, because it offers the only centralised service which operates across a network of hospitals.  ‘By me overseeing the whole of the pathway, speaking to the referrers, the clinicians, the surgeons, nothing gets missed,’ she says.
'The service has made a huge difference.'
- Kristina Coe

And third, because she does not know of another physiotherapist in such a role. She says The Christie had been keen to appoint an allied health professional – and a physio in particular – because the physios’ background in understanding the mechanics of movement and neurology means they are often the ones who pick up early signs and symptoms of this condition.
A report published by The Christie shows the service received 657 referrals in its first year. Of these, 296 people had MSCC, while 80 people had impending compression and needed fairly urgent management.
Compared with the 18 months before the launch of the service, the number of MSCC patients receiving surgery has trebled, and nearly 80 per cent of patients deemed not to need surgery received radiotherapy within 24 hours.
The service has made a huge difference, says Ms Coe: ‘Historically we were having patients brought into the hospital who were suspected of having spinal cord compression, but there was not necessarily a sense of urgency around getting them onto a pathway, in terms of getting their MRI or radiotherapy within 24 hours.
‘So some patients were coming in and being allowed to sit out in a chair, or transferring to a commode. And it was quite hard to get that adherence to the full flat bed rest and log roll, then for us to start mobilisation once the radiotherapy has started.’
Ms Coe spent a lot of time liaising with nursing staff and the medical team to make sure procedures were followed properly. ‘Where I would have spent 45 minutes to an hour chasing perhaps the medical team or finding out whether the patient has had a neuro-surgical referral, I don’t do that now.
‘I can actually spend that time on therapy. So I get to see more patients,’ Ms Coe explains.

In January a business case to expand the MSCC coordinator service by appointing another coordinator and a full-time administrator was presented to the commissioners of Manchester Cancer.
One of Ms Richards’ goals is to be able to collect more data to improve the evidence base for the service. She is particularly keen to gather information about the functional outcomes of patients. And she wants to make sure all patients at risk of MSCC receive appropriate information.
Given the financial pressure on the NHS, is she optimistic that the business case will be successful? ‘I’m hopeful. I just don’t know when,’ she says. ‘But then I have learned over all the years as a physiotherapist working in this field that sometimes change can take years – although I hope it won’t in this case. I won’t give up on my belief that we will get funding though.’

People with cancer are at risk of this spreading to other parts of their body, including the spine. Spinal metastases can be painful and if not treated can lead to metastatic spinal cord compression (MSCC).
This happens when the spinal metastases press on the nerves in the spine. While MSCC is rare, it can cause damage to the spinal cord and lead to permanent paralysis and requires urgent diagnosis and treatment.