A novel physio gym for premature babies in Antrim is having amazing results, as Lynn Eaton finds out. 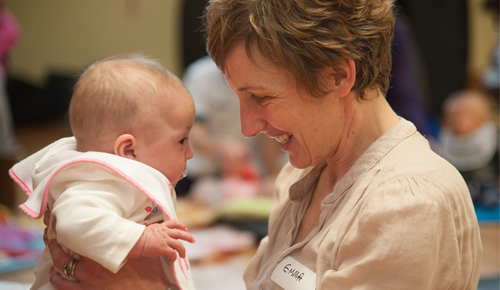 Physiotherapist Emma Cameron at Tiny Gym in Antrim. Photos: Chris Neely
Holding a regular fitness class in a community hall is nothing new. But in an Antrim community building, something rather special is happening. Once a month, a group of mothers and their premature babies meet – for Tiny Gym.
The class has just received long-term funding, following a successful pilot, and is running gyms on two sites. All of this is the brain child of physio Emma Cameron, clinical specialist paediatric lead at Antrim Area Hospital, about 20 miles north west of Belfast.
Research shows that the rate of developmental progress in pre-term babies starts to slow down from four months after birth, due to an underlying muscle imbalance. Ms Cameron was well aware of this, as she had done research in this field.
Before starting to work at the hospital in 2014, she had worked abroad, raised three children and gained a PhD for her research into why premature babies often lack the skills to develop muscle movements.
Ms Cameron also knew that, with the help of a regular and highly specialised exercise regime, premature babies could learn those motor skills. The challenge was finding a way of providing an appropriate clinic where their mothers could be taught the exercise routines. 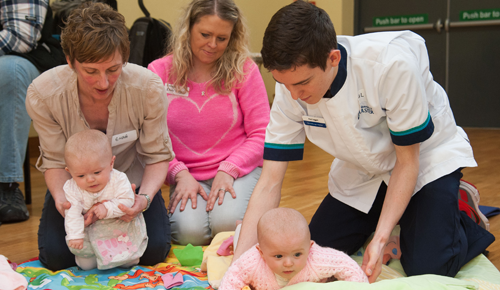 Emma Cameron leads the group
‘Because of my research, we knew the type of intervention that would support these babies,’ says Ms Cameron. ‘We decided to try a pilot for six months, to see how it worked out.’
Although the results have proved amazing, getting to that point was half the challenge. Fortunately, Helen Stevenson, a family support worker with Northern Ireland charity Tiny Life was willing to take up the cause.
‘Some 2,000 babies are born prematurely each year in Northern Ireland,’ says Ms Stevenson. ‘Our role is to support families on their journey.’
The charity’s chief executive Alison McNulty was willing to offer support for the pilot, by funding the hire of a room and providing coffee and scones. It was Ms Cameron’s enthusiasm and commitment for the Tiny Gym concept that won Ms McNulty over.

Having a premature baby is enormously taxing for the parents, who need high levels of support. The babies usually spend their first weeks in an incubator, so the normal physical bond between mother and baby is often missing.
When the baby leaves hospital, practical issues – such as finding baby clothes that are small enough – mix in with the emotional ones. Many mothers worry, for instance, that their baby is not developing as fast as full-term babies.
‘After the babies leave hospital,’ says Ms Stevenson, ‘the issue is about continuity for the mothers who still need support. It can be through parent support groups, but Tiny Gym is a great way of building a support network.’
To be eligible for Tiny Gym, the babies have to be born at under 32 weeks or weigh less than 1.5k g (3lb 3 oz) and come from the Northern Trust catchment area.
The trust covers a mainly rural area of 10 local councils, stretching from the border up to the Giant’s Causeway in the north. As a result, it’s often difficult to keep track of where the babies have gone to after leaving the hospital. Those attending the pilot were from Antrim town, east Antrim and Ballymena. 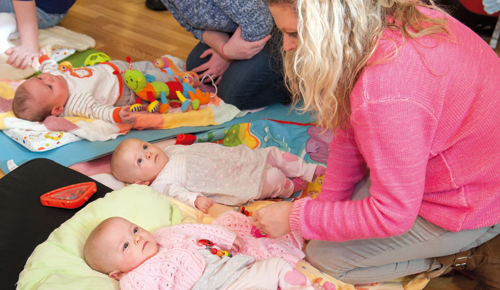 A mother with her twins at Tiny Gym
Of course any new project will bring with it some hurdles to overcome, not least from within the existing clinical team. Ms Cameron did her homework, but is candid about her anxiety on the first day she invited staff from the hospital to visit the gym.
These included staff from the existing baby neuro-developmental follow-up clinic which had previously dealt with premature babies. It was a real ‘make or break’ strategy, but it worked: her colleagues were won over.
‘To tell the truth, we wondered at the start whether it would work,’ says Jackie Quigg, the senior nurse running the existing clinic, which covers all newly born babies. But her mind was made up after visiting the gym and seeing the progress that the babies – and their mothers – had made.
She tells the story of one baby born just 27 weeks into the pregnancy, and whose mother lived in a remote part of the county. The ambulance had thought it was a 27-week-old baby, not such a premature one.
After the initial delays, the baby was rushed to hospital. Now – against all the odds – the baby not only survived, but is walking.
‘The great thing too,’ says Ms Quigg, ‘is that the mummies get feedback from the other mummies.’

The main focus of the gym is to teach the mothers a play routine which helps the baby reach his or her developmental milestones. But it’s also about providing support to the mothers.
The team of staff involved offer talks in feeding, weaning, skin care and first aid. The staffing for the clinic includes an occupational and a speech therapist, a nurse and Ms Cameron as the physio.
Ms Cameron also gained the support of the consultant neonatologist running the existing clinic, Sanjeev Bali. He sees a wide range of conditions in his clinics but says that having a specialist facility for the neonates with brain injury, whose development is impaired, is particularly useful.
‘Rather than Emma coming up to that clinic when needed, she’s brought the babies together in the Tiny Gym clinic, allowing her to be more focused. Otherwise she’d have been organising individual therapies at home.
‘From my perspective, it’s been excellent. It’s given me a lot of information about the babies, and it also allows the parents to get to know one another. They find that very useful.’ 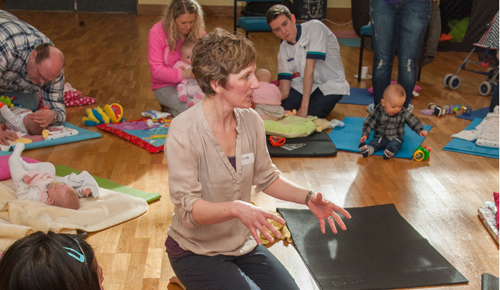 Emma Cameron: 'The mothers take encouragement from other babies' progress, and by seeing what they're doing.'
After the initial 10-minute ice-breaking, they move into 20 minutes of singing and focusing on posture, anti-gravity activities and rotation skills. The gym ends with the education session and one-to-ones with the mothers.
‘The clinic’s six month pilot was great fun and everybody learned so much,’ says Emma.
But it had to be more than just fun. In order to measure the value of the clinic, they asked the mothers about their levels of confidence, or anxiety, at the start and end of the course.
The mothers gain confidence just from seeing other babies like theirs. The overall anxiety of the group averaged as ‘6’ (on a 1-10 scale) at the start of the programme but by the end it had reduced to ‘4.9’.
They also recorded the babies’ motor outcomes. Based on 14 repeated measures their percentiles, using the Alberta Infant Motor Scale, averaged 19.25 on the first assessment and rose dramatically to 37.88 on the second.
Watching the other babies’ progress was something that would not be easy for the mothers in a mixed class where full-term babies develop more rapidly. ‘The mothers take encouragement from other babies’ progress, and by seeing what they’re doing,’ says Ms Cameron.

Feedback from the pilot included: ‘nice to have support from people who know about premature babies’; ‘great to meet other parents that had an early baby’; and ‘feel less anxious about how my baby is developing’.
Of the 44 invitations sent out for the pilot, 23 mothers took up the offer, which raises questions about why 21 didn’t. That could be due to travel difficulties, the day of the clinic, or childcare arrangements for other children.
But for those who did attend, the results were amazing – providing they did the exercises at home too. One of the mothers, Rachel Lindsay, had her baby, Zachary, in December 2013 at 30 weeks. He weighed just 1.87 kg (4lb 1oz) and had lacked oxygen at birth, so was at risk of cerebral palsy.
‘There was a point at which I wondered if he would ever begin to move but first he began rolling over, then back and eventually sitting, crawling and standing.
At the final Tiny Gym session he was unrecognisable from the rigid, thin baby he was when he left neonatal. We are so lucky that the pilot commenced at the time when Zach needed it most.’