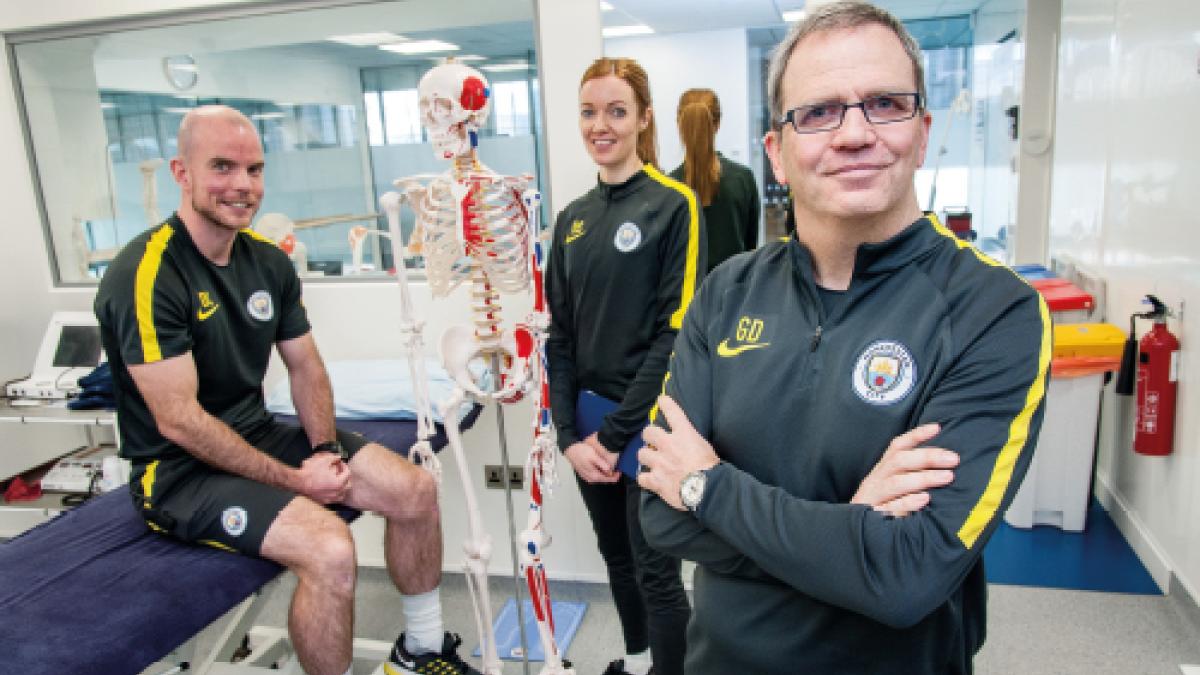 As lead physiotherapist with Manchester City Women Football Club (MCWFC), Helen Sandall can look back on the last season with enormous pride. The Blues won the coveted double, taking the FA Women’s Super League title and winning the knock out cup competition. This coming season, which kicks off on 11 February, is set to be equally thrilling.
It’s a dream job for Ms Sandall – all the more so because it’s a post she didn’t imagine would ever exist when she was a child. But with the increasing level of interest in women’s football, it’s a growth area for physiotherapy that she’s keen to promote.
‘I was sporty as a child, but I was never going to set the world alight with my sporting talents,’ she laughs. ‘I knew I’d love to have a job in a women’s sport, and I really liked women’s football, but I didn’t think I’d get a paid role, full-time. The professionalism didn’t really exist at that time. She adds: ‘But things are changing, and the sport is really up and coming.’
To Ms Sandall, the 2012 London Olympics were pivotal in the development of women’s football. ‘Filling Wembley Stadium and beating Brazil brought it to the forefront,’ she smiles. ‘Then clubs like Manchester City really took it on.’ Working as physio for the women’s team has many of the same elements as working with men’s football teams, but also brings its own challenges.
‘I’ve been in and around sport for a long time, and know it’s hard work and long hours,’ says Ms Sandall, who started her career in the NHS before moving full-time to sports physiotherapy. ‘You have to have a passion for it, because you go through everything with the team; you live the injuries with them, and all the emotions and the highs and lows. You go through it all as a team – it’s like a family.’
The increasing professionalisation of the women’s game has brought its own issues for players and support staff alike. ‘One of the challenges has been making the switch from part time to full time. For the players, it’s gone from something that was maybe a social thing, to being their job.’
The fact that it’s early days for the sport also means that, unlike those at the top of the men’s game, today’s elite women players have not been through an academy system such as that run for children and young people at Manchester City (and all other top flight clubs). ‘These youngsters have been training properly for years; any injuries have been consistently managed. The women, on the other hand, might have chronic issues and injuries built up from earlier in their career.’
The way that women move also brings particular hazards, says Ms Sandall. ‘There are more knee injuries, for example,’ she says, adding that going from training twice a week to full time can also be an issue. ‘There are still a lot of unknowns. We keen an audit of all injuries, so that we can look at what’s occurring and draw conclusions, but it’s still very early days – we’re only three seasons in.’
Ms Sandall and others in the MCWFC support staff are fortunate enough to be based at the Manchester City Academy, a facility with top-of-the range equipment and a crack team of experts. Working under head of performance Grant Downie (see below), the academy’s multidisciplinary team is also responsible for looking after the boys and young men who are striving to become professional footballers.
Working with the young players is also a job with tremendous highs and lows, says Dave Clark, who is lead physio for the elite man under-15s and 16s programme. Like Ms Sandall, he worked in the NHS, and volunteered and worked part time with football clubs before landing a full-time job, first with Glasgow Celtic then at Manchester City.
There’s a tremendous responsibility in supporting these young men who dream so passionately about becoming professional footballers, he says, and the job involves far more than managing and preventing injury. ‘There’s a lot of behavioural overlay,’ he says. ‘I hope they can talk to me – it’s not that long since I was their age – and the physio room can be seen as a safe room.
‘They have a lot of pressures like social media, and pressure at school. For some, they are the big hope for their family – yet so few of them will actually make it.
‘It’s not just about developing the footballer. We’re helping then to have the skills they need to succeed on or off the pitch.’
Mr Clark stood in for Ms Sandall when she was on maternity leave, helping the women’s team to the title – and learning a great deal himself during the process. ‘The women’s game is growing exponentially,’ he says. ‘I don’t think it will ever catch up with the men’s – it’s been going for 140 years after all – but it’s a really exciting time. It’s also exciting for physiotherapy – in a way, we’re working with a blank canvas, and learning as we go along, and physios love to learn new things.
And the male and female players don’t just differ in injury patterns, he found. ‘I was doing an Iron Man and the whole women’s team turned up to support me,’ he laughs. ‘You wouldn’t have got the men doing that.’
Much as both clearly love their jobs, they warn that it’s not easy, and that it’s not all glory and trips to exotic locations; getting a post also takes long-term effort. ‘It’s not glamorous,’ says Ms Sandall. ‘Yes, there are fantastic moments like cup finals, but there are long hours and hard graft in the background. And you really do have to have volunteer or shadow – you can’t just apply for a job. But it really is my dream, and I love it.’ fl

When Grant Downie was 11, his teacher told him he would never amount to anything or get a decent job. Today, as head of performance with Manchester City Football Club Academy, with a CV that takes in other top clubs in England and Scotland – and with an OBE to boot – it’s fair to say he’s proved that teacher wrong.
‘I’ve had a fantastic career,’ he says. ‘I’ve travelled to most places in the world and I love what I do. When I was 11 I was dyslexic, and was told I’d never have a career. But I think that provided you’re a decent human being and work hard, it’s amazing what you can do.’  The academy is responsible for youth development at the club, and has programmes for all age-groups from under-10s to just below professional level.
For the last three years, the women’s team has also fallen under his overall remit – a move he very much welcomes. ‘There was obviously a business outlay for the club, and the gate receipts are not equal to that outlay. But it brings other value, such as promoting the women’s game and promoting women’s health.’
Managing a physiotherapy team of around 25, he is very specific about what he expects from his staff, at recruitment stage and beyond.

‘I like people who have an NHS background because they’ve had experience of working with illness, and in a multi-disciplinary team; it’s a good training. I also like people who have done voluntary work.
‘About 90 per cent of my job is standing back and seeing what’s going on; I believe in empowering staff, so they have an area they are responsible for, but are supported too.
‘We want to push boundaries, but we want people to be brave enough to accept when they get something wrong.’
Above all, the physiotherapists and everyone else at the academy are focused on the young players as people, rather than merely tools in the hands of a mighty conglomerate, and that means ensuring that education and pastoral care are top-notch.
It’s a brutal environment in a lot of ways – of the 400 or so boys taken into the academy, only two per cent will still be playing in top flight teams by the time they are 22.
‘It’s a 98 per cent fail rate,’ says Mr Downie; it’s the X-Factor every day for these youngsters, and they’re under a lot of pressure.
‘In this job, you have to be compassionately ruthless, and that’s what we all try to be.’