Back in power: what can we expect under the new government?

The general election delivered a majority Conservative government in Westminster while the SNP won almost all the seats in Scotland. What does the new face of UK government mean for physios and for public services? Frontline reports. 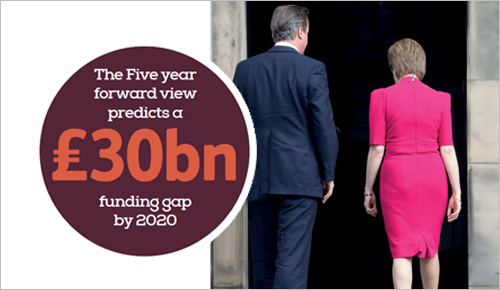 The unexpected results of last month’s election mean the Conservatives have a majority government after five years of coalition. Meanwhile the Scottish Nationalist Party (SNP) returned more MPs than they’d dreamt possible in 2010.
While health spending is now devolved to Scotland, Wales and Northern Ireland, some issues, such as pay, remain UK-wide policies.
Many of you helped promote physiotherapy’s role before the election, by emailing your MP with four key physio questions.
The CSP will continue to promote these asks across the UK: better access to rehab, falls prevention, self-referral and fair pay for NHS staff.
Despite cuts on the horizon, there are still opportunities to progress these priorities as part of the government’s commitment to the Five year forward view. See www.csp.org.uk/node/858819
But there are real threats too. The CSP, together with allies, will be doing its best to protect and promote the interests of members and services for your patients. But it will have to be realistic about what is achievable, focusing on key priorities, including promoting the profession through the Physio Works programme.
Any effective organisation ultimately relies on active members so it’s up to each one of you to help.

Things may get even tougher for NHS staff than the past five years, when the policy of capping NHS pay led to a real terms cut of 8 to 12 per cent.
After ignoring the Pay Review Body (PRB) recommendations for two years in a row, the Conservative Party has renewed its commitment to the PRB as part of the settlement of this year’s NHS England pay dispute. But it remains to be seen what this while mean in reality. In addition, Conservative policy is to reduce or abolish unsocial hours payments for NHS staff.
Even if you don’t work in the NHS, this could affect your pay, as rates tends to reflect NHS rates.

Your rights at work

The government plans to make it harder to hold a legal industrial action ballot in ‘essential services’ including health. In addition, the ability of local CSP stewards to support NHS members at work could be undermined under plans to restrict protected ‘facility time’  for union reps’ duties.
Charging for employment tribunals, introduced in the last parliament, will continue and will affect all members, reducing fair access to justice.
A number of important legal rights emanate from the EU, including health and safety at work, working time and equality standards; part-time worker rights and TUPE rights, which cover transfers to new employers. The possibility of the UK withdrawing from the EU places these in jeopardy.
Changes in the way care is provided could mean members work in new employment settings, possibly being employed by a GP practice.

The financial squeeze on NHS England is set to continue. The Westminster government has pledged to increase spending by £8 billion a year above inflation by 2020. But with the Five year forward view predicting a £30 billion funding gap by then, and a £22 billion target through ‘efficiency’, this will ‘just be enough to keep the lights on’, says CSP’s chief executive Karen Middleton.
Efficiency savings achieved to date have been principally achieved by pay restraint, which is deemed unsustainable by NHS England and Monitor. It has also been reducing the prices paid for healthcare without evidence to suggest productivity gains justified tariff cuts.
Opportunities for genuine efficiencies do exist, however. The Boorman review of NHS sickness levels indicated that £500 million a year could be freed up if fewer staff fell ill and took time off sick. But more NHS trusts need to implement his recommendations, which include having physios on site offering occupational health services.
While NHS funding in the other three countries is devolved, MPs from these countries will have a say in their country’s overall funding from Westminster.

With adult social care spending falling by 26 per cent since 2010, plans to cut the local government budget by a further 33 per cent and the £200 million cut to public health expenditure, the burden on the overstretched NHS can only increase.
Integration around patient needs could be hugely positive. But in the short term there are big questions about how this could impact on quality of services given the planned cuts in social care. The CSP’s call for more investment in fall prevention schemes would not only save the NHS money but help reduce the number of older people needing care as a result, either in their own homes or in residential care settings. The CSP falls prevention calculator will show you how much it could save in your area.

Changes to health and care services to reflect shifting population needs represent a significant opportunity for the profession. Providing more services in the community and encouraging greater independence for older people are all positive steps that the CSP welcomes. We have the cost-effective answer to many healthcare issues, preventing long-term health problems from becoming chronic, keeping people in work, reducing levels of disability and improving quality of life.

Some more vulnerable patients will be affected by planned cuts to public spending of £30 billion by 2019-20, downsizing the public sector and the welfare state. The first measure, unveiled in the Queen’s speech, is a cap on overall welfare spending per household.

The health secretary for England, Jeremy Hunt, says his top priorities are transforming care outside hospitals and introducing seven-day-a-week NHS services. Both need to be funded and set up with NHS staff and CSP rep involvement. The CSP will work to develop positive new approaches.

A fresh push to devolve powers away from Westminster coupled with the new political make-up of the parliament is likely to further strain the UK-wide Agenda for Change agreement for NHS pay as different parts of the nation may look towards pay deals for their country.
There may also be an even greater divergence in health systems across the four countries. fl

What can you do now?

Keep pushing the CSP’s four key messages: don’t stop just because the election is over! Continue to use our key messages, as hundreds of members did before the election to lobby their prospective parliamentary candidates. Now you know who your MP is, why not remind them of our asks:
Look out for the CSP’s Physiotherapy works briefing for all MPs on for your community, due out in September.
Pledge your support for Physiotherapy Works: if you’ve not yet done so, check out the CSP’s major campaign to promote physiotherapy and make personal pledge to get involved in spreading the word.
Get active at work: lend a hand to your CSP steward and safety rep, telling them about any detrimental proposals linked to your employment or service. If your workplace doesn’t have a CSP rep contact the CSP’s enquiry handling unit about getting the CSP involved or seeking advice.
Look out for other NHS campaigns: even if it is just for a few minutes once in a while, get involved in other campaigns the CSP will be running, both locally and nationally, to protect the services your patients depend on.