Back to my roots: a profile of new CSP chief executive Karen Middleton

Karen Middleton joins the CSP this week as chief executive. Frontline’s managing editor Lynn Eaton managed to catch up with her – but only just 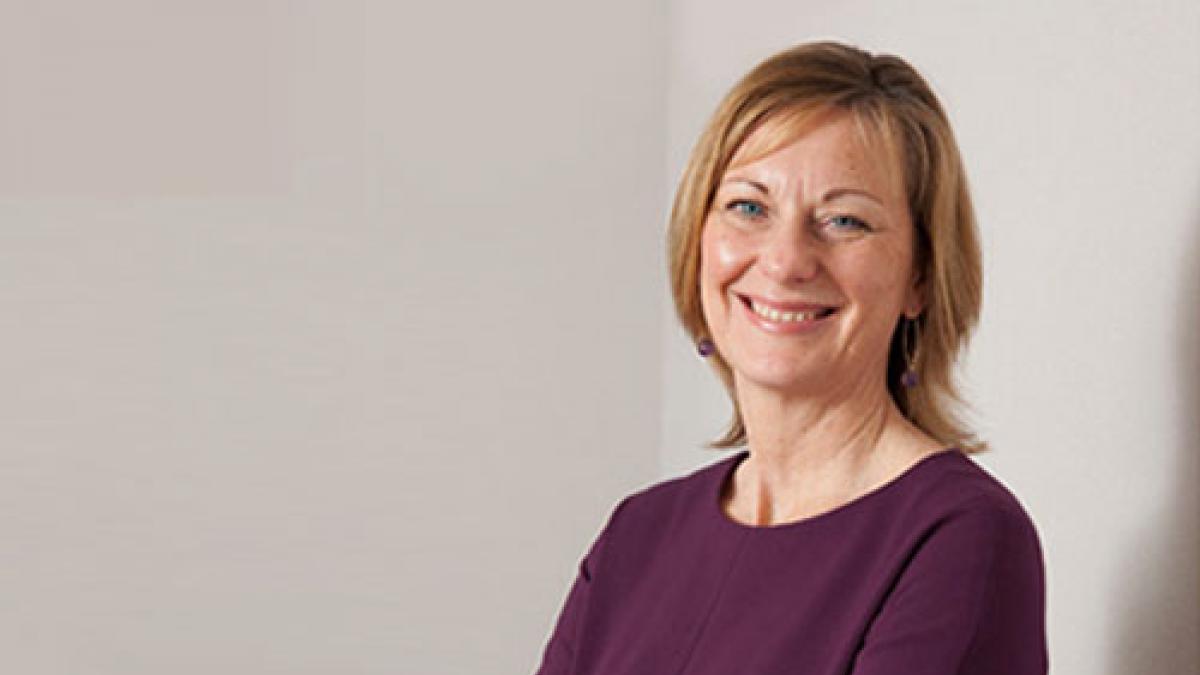 Meeting your new boss is, potentially, a fraught experience; even more so when you have to interview them for an article in Frontline.

You’re especially keen to make the right impression, to be well prepared – and to get there on time.

It says something, then, that Karen Middleton manages to be sympathetic rather than furious when I arrive 40 minutes late for our appointment after mixing up the start time in the middle of a hectic week and spending a fraught taxi ride battling through London traffic.

‘I know how you’re feeling,’ she says, calming me down and offering me tea or coffee between my profuse apologies. ‘I know I’d feel awful if I’d been in your situation.’

That exchange – with a no blame attached, ‘stuff happens’ attitude – seems typical of Karen’s approach.

Her ability to put herself in someone else’s shoes might come naturally, but the lessons learned from being a CSP steward and from holding down a high-profile role at NHS England must have helped.

Now just turned 50, Karen started out as a physio at Oldchurch Hospital, Romford, Essex, in the mid-1980s. (The hospital, a former workhouse in what was then one of the grittier parts of north east London, is now called Queen’s Hospital).

Within 18 years Karen was on a national stage, as the Department of Health’s (DH) health professions adviser.

Then, in 2007, she became chief allied health professions (AHP) officer at the DH (now NHS England).

So what did she think when she saw the CSP job advertised?

‘My first thought was “this is poetic. I want that job, I can do it – and the timing is right for me and the CSP”.’

It’s a far cry from her teenage dream of being a physio for a football team – no doubt West Ham United, the east London club she ardently supports.

Karen was brought up in Emerson Park, on the nicer side of Romford and just a 30-minute journey from the Hammers’ Boleyn Ground.

For all the ribbing her Essex background may invite, she’s not hiding her upbringing.

In her distinctively Essex accent, she notes: ‘I think other people have got a thing about the county: I don’t.’

She says the same about being a woman: it’s not something she thinks about. Brought up in a family of brothers, she acknowledges the part female role models have played in shaping her career.

However, one low point was when someone (whom she won’t name) suggested she take elocution lessons.

‘It made me even more determined not to lose my accent: I even sometimes want to wear the archetypal white stilettos, just to show them!’ she jokes.

Karen’s training at St Mary’s Hospital, Paddington, London, in the mid-1980s was a bit of an eye-opener.

It rocked her pre-conceptions: ‘I’d thought physiotherapy was all about musculoskeletal (MSK) disorders, so when the tutors started talking about the lungs, for example, I was a bit surprised.’

Now, after seven years spent representing 86,000 AHPs, Karen is returning to her physio roots – and clearly feels energised by the prospect.

Leaving ‘hands-on’ care was a wrench

‘Whenever somebody asked me “what do you do?” at a party I always answered: “I’m a physio”.

So it feels quite liberating, after years of being multi-professional and multi-sectoral, that I can be me again. Not,’ she adds quickly, lest she gives the wrong impression, ‘that I haven’t been authentic throughout the last 10 years.’

Karen chalked up an impressive list of achievements at NHS England: delivering independent prescribing rights for physiotherapists and podiatrists; helping to put in place outcome indicators for AHP services; and leading on self-referral pilots for MSK physio.

She garnered a string of accolades along the way, including a CBE, four honorary doctorates, a CSP fellowship and, just last month, a visiting professorship at Leeds Metropolitan University.

Although a high-flyer, there’s something reassuringly down-to-earth about Karen. I feel I already know her, even though we’ve only met a couple of times.

Maybe the fact I’m also an Essex ‘girl’, who grew up about 10 miles away from her, helps?

She acknowledges she’s a ‘what-you-see-is-what-you-get’ kind of person. It’s something her husband, Ralph, is a bit disarmed by at times – not, perhaps surprisingly, given he works for the National Crime Agency. ‘Ralph would probably say I am too open and too trusting. But I can spot people a mile away who tell me what they think I want to hear.’

What defines Karen is her personal integrity (‘I am fairly comfortable saying I don’t know or that I made a mistake’) and her desire to improve patients’ experiences.

Leaving ‘hands-on’ patient care behind to climb the management ladder was something of a wrench, but Karen realised she had the skills to lead others while simultaneously improving patient care. She has always kept in touch with grassroots physios.

‘I loved clinical work. Part of retaining my sanity has been going out and chewing the cud with clinicians,’ she says.

As part of her induction at CSP she plans to visit physio staff in Scotland, Wales and Northern Ireland, to find out more about the issues in these countries. She also hopes to continue spending time with physiotherapy services.

Karen developed her listening skills early on in her career, while working on a project to gather patients’ experiences of services in the east London borough of Tower Hamlets.

‘That had a life-changing effect on me,’ she says. ‘It makes you realise how far you can be, as a clinician, from the perspective of the patient. That experience has informed a lot of my work. You need a mindset of being open to real differences of opinion from your own.’

Karen says her experience of being a CSP steward, from 1986 to 1992, also had a huge influence.

‘It was probably the best management training I ever had. I have to acknowledge the role that Phil Gray played in that,’ she says, referring to the training she received from Mr Gray, her predecessor at the CSP, when he was the society’s head of industrial relations.

‘I learnt to influence, to negotiate, and how to aim for “win, win” scenarios.’

Karen’s aware of the need to shift gear in moving to a role where she will represent members and their needs, not just the needs of patients.

‘The CSP is there to support and represent its members. However, that should not and cannot be in opposition to improving the quality of care for patients.

The professional body and trade union elements of the CSP need to show how employment relations and working conditions for staff affect the quality of life and care for patients. Just as training, professional standards, new practices and innovation do.’

The move to seven-day services is one example of the need to improve services while recognising the work-life balance needs of CSP members.

‘Nobody is asking anybody to work a seven-day week,’ she says. ‘We are asking for a seven-day service, and only where it is needed.

In a world where we expect everything else, like banking or shopping, to be 7/7, why with something as basic as health is it such a shock to be 7/7? I’d say to physiotherapists that, if your service is so important that it should be commissioned, how is it that, come 5pm or the weekend, it’s not required?

‘I’d like to see the CSP leading and being proactive about things like seven-day services. There are plenty of other people who will fill the gap if we don’t. But it’s the way in which a policy like that is introduced and implemented that is crucial to its success.’

Karen has mainly worked in the NHS (she did some part-time private work in the mid-1990s, including stints with sports clubs) but the prospect of being CSP chief executive doesn’t faze her.

‘I like to extend my comfort zone,’ she says.

She will bring to the role years of experience in representing members in a variety of settings, such as education and the private sector.

The CSP role offers a challenge that she happily embraces.

Having thrived at the DH, and latterly NHS England – notoriously tough places for a non-career civil servant – Karen will be no push-over.

So what are her priorities likely to be at the CSP? She’s joining at a time when there are huge financial pressures within the NHS, where – as she says – ‘healthcare is at a massive tipping point’.

Not all about finances

For example, there’s the rapid pace of change, the advent of genomics, with its potentially huge impact on healthcare, and advances in digital technology.’

She is adamant that the growing population of older people and those living with long-term conditions presents opportunities for physiotherapists.

The longer people live, the more we have to enable them to be independent, she says.

‘I get quite frustrated when physios only talk about “helping” and “supporting” in that agenda. That’s far too modest. Rehabilitation is a massive agenda and we have a massive part to play in it.

We need to be leading it.’

On the subject of being a leader, until now I’ve deliberately avoided the issue of West Ham’s lowly position in the Premier League (they are in danger of being relegated.)

I decide to hoof a long ball into the penalty box.

After all, I suggest, manager Sam Allardyce is trying to get the best from his team, despite financial restrictions, just like his counterparts working in the healthcare field today.

‘So, what does a manager do if they don’t have the money to assemble the team required to win the league?’ I ask Karen innocently. Her response is swift: ‘You have to be very flexible and do things differently,’

Karen chuckles: ‘If the CSP job hadn’t come up, there’s always the chance that the West Ham manager’s job might.

I could have gone for that!’

Whether West Ham can manage to avoid the drop remains in question, but the CSP looks set to play at the top of its game for the foreseeable future. fl