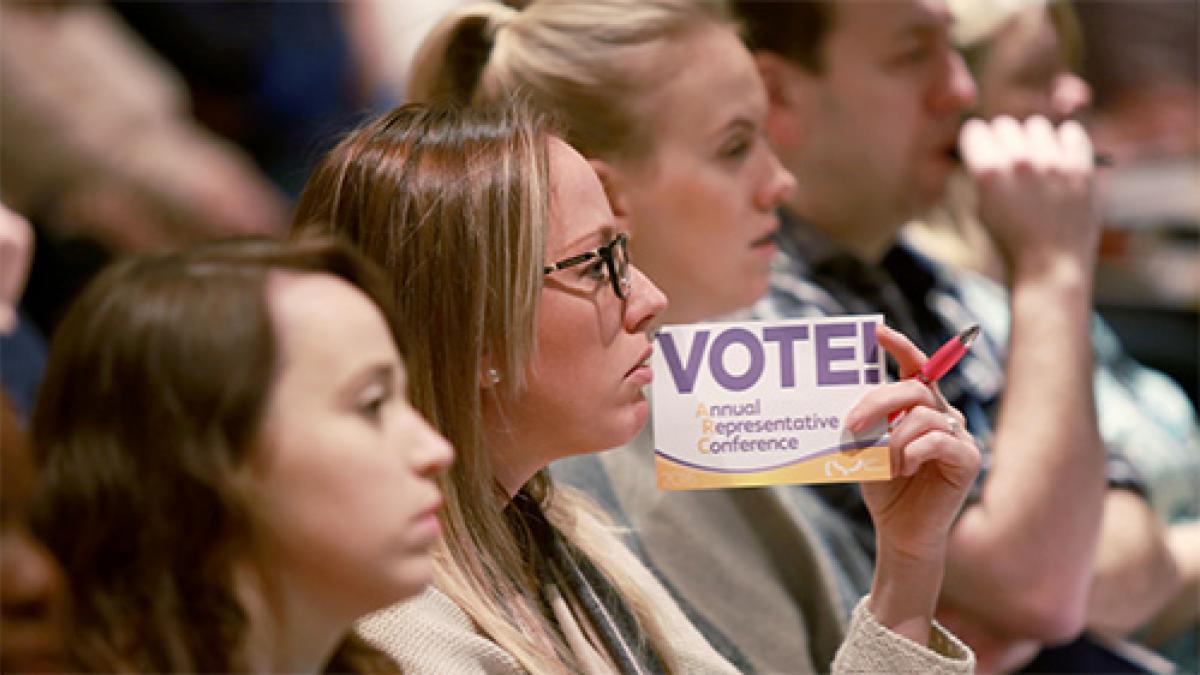 Many physiotherapists who are on call miss out on proper rest breaks, leading to fatigue, stress and potential hazards for members and patients.
Katrina Humphreys called on the CSP to update guidance about rest entitlement. This was particularly important for physiotherapists who are on call overnight, she said.
‘Few members know what the guidance is about on-call compensatory rest breaks,’ she said. ‘And, shockingly, those who do know often don’t take their rest properly because they feel they will be punished for it, or feel they will be letting down their patients and colleagues.’
Ms Humphreys told delegates: ‘We are asking the CSP to review all the current guidelines and advise managers and staff about what they are entitled to.’

An increasing number of young children are developing musculoskeletal (MSK) problems – known as ‘text neck’ or ‘computer hump’ – because they are using digital devices in schools.
This was the message from Michelle Baylis who explained that paediatric physiotherapists were receiving an increasing number of referrals for children with back and neck pain, which was often associated with the use of technology in schools.
‘Typically the incidence of back and neck pain increases with age, but we are now treating more school- age patients who have never reported problems before.
‘Hunching over electronic devices from a young age can entrench bad habits, which may cause further problems in adulthood.’
Ms Baylis called on the CSP to take action, by actively encouraging the development of advice and guidelines for teachers and schools about how children could safely use technology in school and reduce the risk of developing MSK problems.  In addition, Ms Baylis suggested that the society should undertake a scoping project to find out the prevalence of repetitive strain injuries and neck and back pain in children and young people.

Physiotherapy staff who feel unwell may go to work because harsh workplace policies punish them for taking days off sick, delegates heard.
Ian Scrase spoke about a growing culture of ‘presenteeism’ and said: ‘I am aware of some trusts where three episodes of sickness in a six-month period automatically leads to a formal meeting. That’s not surprising, but as well as that staff end up with a written warning on their record.’
Delegates called on the CSP to promote the merits of supportive sickness absence policies, which would not unduly punish individuals.

The greatest concern of UK physiotherapy staff is the sense of a deterioration in services, said Karen Middleton.
It was ‘startling’ that CSP members who Ms Middleton met every week did not want to discuss with her ‘very tough’ issues such as pay, banding and staff shortages.
‘What they want me to know about is how hard they are working to still deliver high-quality care and how their greatest concern is that the quality of care is in jeopardy,’ she said.
England’s health secretary Jeremy Hunt’s imposition of a contract on junior doctors did not bode well for future negotiations, or for CSP members’ weekend and evening pay rates, she said.
‘As your trade union we continue to work hard to ensure we are impactful in our negotiations on these issues.’
Turning to the government’s comprehensive spending review and the 6.7 per cent cut to physio training commissions in England, Ms Middleton said the link between the two could not be denied.
‘It is completely disingenuous of this government to say it is protecting spending on the NHS while cutting the very workforce that will deliver the service.’
On the plus side, in Wales there had been an increase in physio training commissions of more than 36 per cent this year and last, she told delegates.
The development of the leadership capacity and capabilities of the physiotherapy profession was something Ms Middleton was ‘very clear’ about. ‘It will really step up a gear which is particularly vital in these turbulent times.’
The context in which all physio staff work is going to get harder, Ms Middleton warned.
‘But I know, together, we can ensure our profession is stronger so that patients and the public reap the benefits of the contribution we make to their lives,’ she said.