Aiming for perfection - physio rehab for older people with dementia

Physio staff in south Yorkshire are finding new new ways to promote the rehabilitation of older people with dementia. Ian A McMillan reports 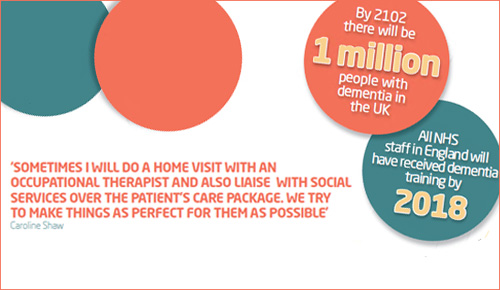 Perfection is probably not attainable in today’s hard-pressed NHS, but it’s a goal that south Yorkshire-based physiotherapist Caroline Shaw strives to reach every day.

Ms Shaw works with inpatients on six orthopaedic wards at Doncaster Royal Infirmary. ‘Each ward has about 14 beds, and I can take referrals from all of them,’ she says. ‘Most patients have had a fall and subsequently broken their hips.

The nurses usually get them up first day post-op if they are medically well enough, and I will see them a couple of days later if there are concerns about cognition or mood, for example.

I have a little more time to spend with them than the ward staff and can unpick the environmental or physical reasons – such as having pain – that might impact on their rehab.’

Though an RDaSH employee, Ms Shaw is a member of a liaison service that’s delivered to Doncaster and Bassetlaw Hospitals NHS Foundation Trust.

‘Generally I see patients who have got a dementia diagnosis,’ she says. ‘Sometimes I do a joint assessment with one of my nursing colleagues, and if they feel it’s appropriate and there’s a mood issue, for example, that needs managing, the liaison team would look at responding.

‘If it’s a memory problem that needs to be explored further, we would set up a referral to their GP following discharge. Sometimes I will do a home visit with an occupational therapist and also liaise  with social services over the patient’s care package. We try to make things as perfect for them as possible.’

Lengths of stay vary: with patients who have come from a residential or nursing unit the target is to discharge them in seven or five days respectively.

‘It’s often a little more complex when patients have come from their own home, but work alongiside ward and community staff to make a rehab or discharge pathway plan for patients as quickly as possible,’ says Ms Shaw. ‘We have got access to several rehab wards, including two units especially for patients with dementia, and some, of course, will go home where appropriate.’

Ms Shaw says that patients with dementia have traditionally had longer stays in NHS hospitals after having an accident or fracture than their counterparts who do not have such a diagnosis.

Ms Shaw has also been involved in a 12-week pilot scheme in which people aged over 65 years arriving at A&E are screened for depression. ‘It runs in the evenings and Saturdays and I work alongside a social work team. The aim is to prevent unnecessary admissions and facilitate early assessments – we “cut them off at the pass”.

Ms Shaw adds: ‘Doncaster Royal Infirmary has also included dementia training in the induction programme for all staff, which is really positive.’

This development would be music to the ears of policymakers at a national level. In a bid to improve services for, and attitudes towards, people with the dementia, Health Education England has announced that everyone working in the NHS will have received dementia training by 2018.

The need for training for student physiotherapists was aired at this year’s CSP Annual Representative Conference in Cardiff.

Despite claims that there will be more than one million people with dementia in the UK by 2102,  students currently receive ‘very little’ exposure to the topic on undergraduate courses, delegates were told.

The post held by Ms Shaw was created to increase the rehabilitation potential of people with a diagnosis of dementia, she explains.

‘What we find is that Caroline can get people on their feet who might not have done so before. In the two and a half years she’s been here, Caroline has upskilled and is now a mental health practitioner and has the additional physiotherapy expertise. I think the whole team has found her to be a massive resource. We do “pull” on her, left right and centre.’

So impressed has Ms Hirst been by Ms Shaw’s contribution that she is about to recruit another physio into a post that was formerly filled by a nurse.

John Bottomley, an RDaSH consultant in old age psychiatry, says Ms Shaw’s ‘inreach’ role in the orthopaedic wards is a key part of a ‘highly effective service’. ‘The main reason for this is the mental health physiotherapist delivering this service, whose attributes and competencies enable timely, specific, effective, objectively clinically significant care to be delivered to orthopaedic patients,’ says Dr Bottomley.

‘Rather than awaiting referrals, the proactive service involves screening older adults on the orthopaedic wards to actively find cases where patients may have mental health problems (such as depression or dementia) and then inform care planning to optimally meet that patient’s needs.

Sharon Greensill is the professional head of the physio service at RDaSH, She says that physiotherapists play a key role in the trust’s multidisciplinary teams.

She is particularly pleased with a recently-opened unit in Rotherham, which was purpose-built for people with dementia. Every patient has their own room with en-suite facilities.

‘All the older people admitted to our mental health wards are assessed by a physio within two days,’ says Ms Greensill proudly. ‘Assessing for risk of falling is a key area. ‘Colour is used to help people to orient themselves in the building and there is clear signage.

A coffee area means service users and their visitors can sit together in a comfortable setting,’ says Ms Greensill. ‘There is even an old-style radiogram in the foyer so that people can play vinyl records of the music they enjoyed when they were younger.’

The trust is split into three ‘localities’ – North Lincolnshire, Doncaster and Rotherham – each having its own designated ward or wards for older people with a mental health condition.

Though much of the heavy industry, such as the steelworks and coalmines, has closed, a legacy lingers with high rates of chronic obstructive pulmonary disease and musculoskeletal problems being recorded among older men living locally.

‘In the summer, the physiotherapists get service users out into the garden, weeding and planting. Inside, they might give them a duster and ask them to dust different areas, which will help with balance or involve shoulder exercise, for example. It’s not “hands-on” physio but it’s all about working with service users to promote function and range of movement.’

The CSP is keen to raise the profile of the part physio staff play in supporting the steadily increasing number of older people in the UK. So it’s no surprise that incoming chief executive Karen Middleton visited the unit for people with dementia at Ms Greensill’s trust within weeks of taking up her post.

While the layperson might have a stereotypical image of someone in the physiotherapy profession working with young sportsmen and women, many physios find it very rewarding to work with people at the other end of the age spectrum, Ms Greensill says.

‘Physiotherapists in this field develop a good working knowledge of mental health conditions, including dementia. They also learn about the medication used, including possible interactions between treatments for pain and a mental health issue, for example. We try to use alternative interventions to psychotropic medication, wherever possible.

‘People with dementia in this trust don’t have a profession-specific plan – they have a person-centred care plan,’ Ms Greensill says.

‘A typical plan might say: “Betty likes to get up at 8am but likes a cup of tea in bed first. She likes to put her handbag over her shoulder when she comes out of her room. Betty walks with a stick and likes and somebody on her right hand side” and so on.’

Ms Greensill and colleagues have developed a training package on mental health for physiotherapists in the acute hospital setting, and have trained a ‘significant number’ of them, she says. ‘If you provide people with the knowledge and skills, then it becomes part of their practice.’

What does Ms Greensill look for when recruiting a person to her physiotherapy team? ‘We would certainly be looking for people who have had experience in working with older people, or who express an interest in working in this field,’ she says.

‘If members want to find out more about working in this area, the CPMH professional network runs occasional study days and training events.‘

Indeed, the CPMH is currently planning a mental health training event that will be run jointly with the CSP’s Yorkshire and Humber regional network later this year, Ms Greensill adds. fl