Though Scott Gormley’s career in physiotherapy is still in its early stages, he has already established a firm foothold in football 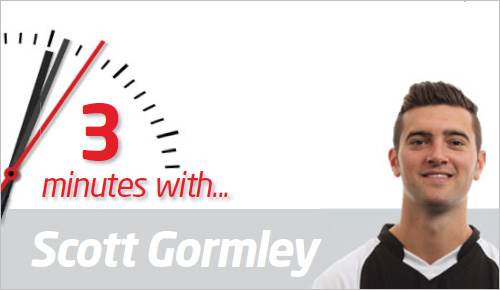 How did you get a much-coveted job in football?

After graduating from the University of West England three years ago, I have worked for Shrewsbury Town FC. I work with the first team, which, unfortunately, has just been relegated to League 2. I am also three quarters of my way through an MSc in sports medicine at the University of Birmingham.

And you’ve also been working with the England set-up. Could you tell us about this?

Over the past season I had the opportunity to gain valuable experience with the England under-18s. I was given this opportunity through the mentored practice module that I completed during my master’s.

Last month I attended a five-day camp with the squad. We met up in Sheffield and trained together before playing Germany at Rotherham’s ground on a Wednesday evening.

It was fantastic to work with and meet the players and staff involved with England. The camp was successful as we ended up beating Germany 2-1 – a true career highlight. It was one of those nights where all the hard work and unsociable hours were worth it. There were more than 9,000 at the ground, and singing the anthem in front of a large crowd was fantastic.

Are you aiming to end up as a physio with the main squad?

I don’t set myself goals that far ahead. I am still very young and want to continue to develop and learn. I would love to work with a variety of experienced physiotherapists and coaches over the next 10 years before even considering such a prestigious role. I think every young sportsman’s or woman’s dream is to represent your country.

Do you combine the England work with your job at Shrewsbury?

I am employed full-time at Shrewsbury Town, which often means working six days a week.  When the opportunity came to work with England I discussed this with the club and they supported me.

I can’t thank Shrewsbury enough for giving me the time away to go and work with England under-18s. I also do a small amount of work in private practice, which has many pros and cons.

When I started in football I was very conscious about not losing the key skills that I had learnt, so after a year in football I went back and did some musculoskeletal training.

How do you look after your own physical and mental health?

I am a very busy physio. I love getting on courses and conferences and try to make sure I do at least one continuing professional development event every month or two. I feel it’s important to consolidate your learning and not learn too quickly.

What inspired you to go into physiotherapy?

As a boy I was always into sport – and still am. l regularly play sporting challenges against the footballers at work. During rehab it’s so important to challenge the lads and setting little silly games with silly rewards and punishments is a great way to keep them entertained.

I played a lot of rugby and football growing up in Worcester. My dad played national level basketball and was always a very strong sporting influence in my life and career. My mum is very sporty as well so I was thrown in at a young age.

I think the biggest inspiration for me to become a sports physiotherapist was the failure to make it as a professional sportsman. I always dreamed of playing professional so for me this was the closest thing to it.

What advice would you give anyone wanting to get into football or another elite sport?

If you’re considering getting into football, I would talk to a football physio about the lifestyle and the demands of the job first.   I have been involved in recruiting two physios at Shrewsbury. For one job we had about 90 applications two thirds of the applications were similar.

The people we interviewed had something extra on their CV – for me that’s vital. In football, you have to do that little bit extra to get the results you need, and if your CV shows this I think you have a great chance of getting an interview.

Does being in football impact on a physio’s social life?

Having a social life away from sport is always hard; you work pretty much all year round. That being said, I have worked in football for three years and have no regrets!

Scott Gormley is a physiotherapist with Shrewsbury Town FC