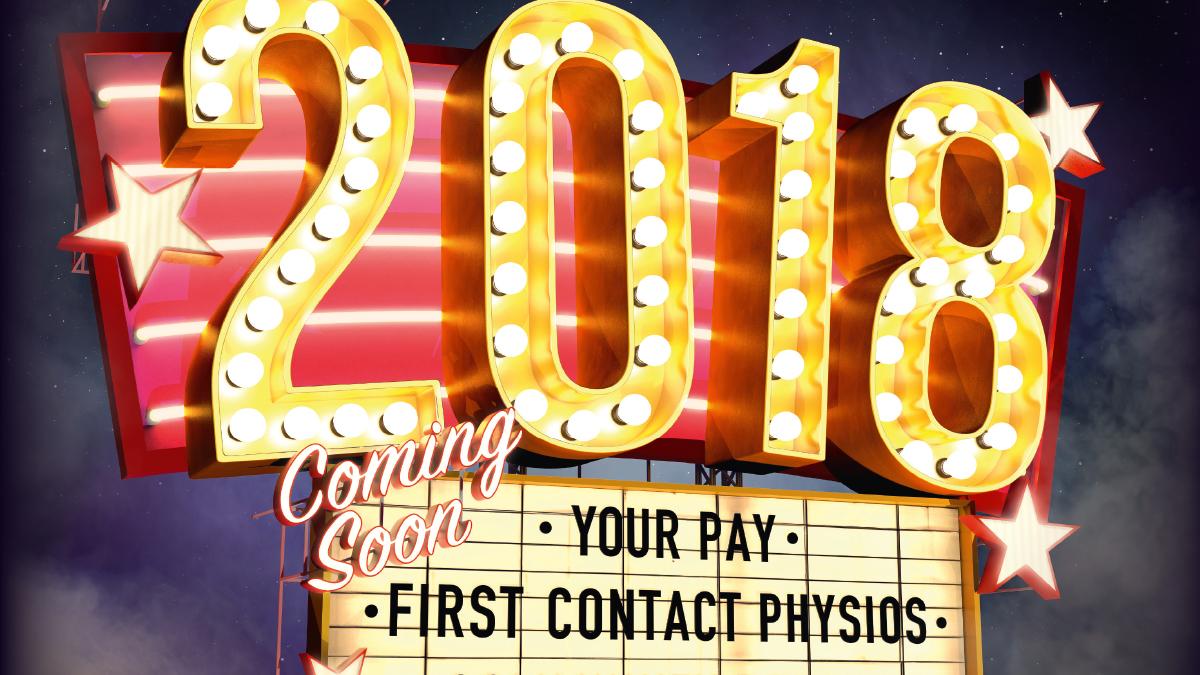 Physical inactivity is a major public health problem and it’s something the CSP wants to tackle in the year ahead.

Only half of the UK adult population does the recommended minimum of moderate exercise five times a week for 30 minutes each time.

Physiotherapists also know about the barriers to fulfilling physical activity, including lack of time, poor organisational support and insufficient knowledge. Access to patient education materials and awareness of local services can help improve a person’s motivation.

We will launch a campaign based on direct input from members across the profession in the coming months to make it easy for physio staff to help get patients and the public more active.

Be a part of the action: if you want to get involved in the campaign, register early interest by contacting the CSP on enquiries@csp.org.uk

Getting physio staff the pay rise they deserve

The pay of members working for the NHS is a top CSP priority for 2018. Along with other TUC-affiliated unions, the CSP will continue exploratory talks with employers and the Department of Health about pay levels and potential improvements to Agenda for Change.

The government-imposed pay restraint since 2010 has seen wages fall by thousands of pounds in real terms for CSP members.

After the government lifted the one per cent pay cap in 2017, the CSP, alongside other NHS trade unions, submitted a joint claim of cost of living, plus a £800 consolidated sum, for all NHS staff.

The CSP will continue to demand that this is fully-funded, rather than being taken from existing NHS budgets. The government said in the November 2017 budget that additional funding might be made available, but it also indicated that it wanted ‘modernisation’ of the pay scale.

The CSP will keep members in the NHS informed and consult on any proposals. However, the outcome of this process will affect all employed physiotherapy staff, as NHS pay is the key benchmark for setting pay outside the NHS. Be a part of the action: lobby your MP for a catch-up pay rise. See www.csp.org.uk/pay

Building the case for physiotherapy

Among the issues you’ll hear more about in the year ahead:

The CSP will be building on a key success in 2017 throughout the UK: the growing recognition, including by GPs, of the value of physiotherapists at the first point of contact for patients in primary care. CSP staff will continue to meet with policy-makers and stakeholders like the BMA and the RCGP to promote this. Support for members leading these developments will be stepped up with the launch of a UK-wide ‘transformation network’ – enabling members to share evidence, learning and experiences of implementation. If you are interested email enquiries@csp.org.uk

Promoting a vision for community rehab

The CSP film Rehab Matters, (www.csp.org.uk/rehabmatters), which shows the huge difference physiotherapy can make, is continuing to make a big impact – look out for the film launches in Wales and Northern Ireland. The CSP will be campaigning for investment in community rehab to be prioritised and working with members to develop a vision of what community rehabilitation needs to look like. We will be joining forces with organisations such as Arthritis Research UK, the Stroke Association and the Allied Health Professions Federation.

The CSP will be supporting members to make the case for physio services and staffing numbers in all parts of the UK. Keep an eye out for a new Safe and Effective Staffing Levels tool and information on how to use this to influence staffing numbers locally. Members affected by potential cuts will be supported through the CSP’s trade union officers, professional advisers, the officers in Scotland, Northern Ireland, Wales and England’s Campaigns and Regional Engagement team – building on the successes of No Physio No Way campaigns led by members. See www.csp.org.uk/nophysionoway

The introduction of Sustainability and Transformation Plans (STPs), covering 44 areas of England, are introducing rapid change and reorganisation in the NHS in England. It is vital that physiotherapy staff influence these plans. Look out for a series of CSP workshops designed to help you influence and develop new ways of working and new care models within STPs and how to share best practice.

Keep in touch: Look out for updates on the CSP’s campaigns in Frontline, on www.csp.org.uk, through Twitter (@thecsp) and on Facebook (@charteredphysios).