Fraying at the edges...

Joyce Williams continues her intrepid reporting from the far side of retirement.

I had no idea how interesting it would be, being a physiotherapist, watching my own body slide away. No, not weight loss, just a steady trickle of small things disappearing as age moves on.

At 82 it is becoming more obvious and I have found it intriguing to realise that much of the loss is quietly and subtly neurological. Wish I had understood that when I was working years ago! (and a further ‘No’ - I don't think I have a neurological condition per se).

So this is a report on my findings from the 'Far Side' of retirement. Maybe I should add that I am increasingly convinced that you cannot truly understand old age until you have tried it. Quite a surprising period of life to live. You learn a lot.

Joint flexibility has not yet been a problem, nor has muscle strength diminished seriously…been keeping a firm eye on them….in true physio tradition.

The new problems seem to involve the loss of reflexes. Balance reflexes were the obvious ones to go. Not difficult to spot them misbehaving. There were techniques for attempting to hold the slide, tai chi etc., maybe not followed as assiduously as they might have been? Whatever, that slide has continued. Uneven ground, cobbles and pebble surfaces are now dodgy…a stick is wise, perhaps a flowery folding one?

(I do hope landscape gardeners, park designers and street planners are reading this!  Our ageing population will need a smooth world. And seats. Plenty of seats. Stamina is having a slide too).

I have already written about the slow loss of eccentric control in knees and the subsequent loss of the ability to step down without a hand touching something. Not for leaning on I hasten to add - just touching - an extra proprioceptive input and it becomes possible.

But another small loss has arrived, very quietly: a slight foot drop. Possibly only noticed because as a physio I began to hear a bilateral foot slap when walking. Nothing otherwise obvious. Until I put two and two together. Or rather, three trips and three falls in the past year. A bell rang.

Not sure what the answer is to that. It is not a strength issue, though that is being given the benefit. Am even wondering if anyone else has noticed it in older people? If so, has anyone considered using a form of springy splint? I would be grateful for comments.

It may already be in falls programmes and assessments of older people but I wonder? Not easy to spot. I only noticed it because I was wearing leather soled shoes and could hear it on pavements.

A further odd reflex slip has begun recently. An incontinence issue. Not the normal drip when you sneeze or the ‘beware-running-taps’ syndrome. I have coped with those, and normally pride myself an excellent bladder capacity and ability to control until I wish to empty.

Disconcerting therefore to find that on waking in the night with a full bladder, an uncontrollable trickle starts as I stand up. Not a lot, but embarrassing and frightening. Presumably the bladder control reflex is not kicking in quick enough or strongly enough to cope with the sudden weight of a full bladder. But rather disturbing to find voluntary control does not replace it.

I have of course done the pelvic floor exercises, but it isn’t my field. Asked my Glasgow GP if I could see a specialist physio. Sadly, no appointment has come and it is now three months later.

Any help from out there?

This is written in the hope that I am talking about things which, although new to me, are already recognised problems in the field of elderly care. I hope so!

If not, then maybe they should be explored? 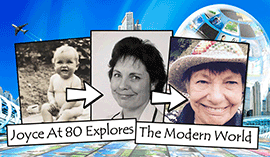 Visit the Grandma Williams Wordpress blog to catch up on other posts from Joyce. You can also follow her on Twitter: @JoyceWilliams_