The Ultra Gobi race is one of the most extreme endurance tests. Ben Watkins didn’t know what he was in for when he volunteered as UK team physio. 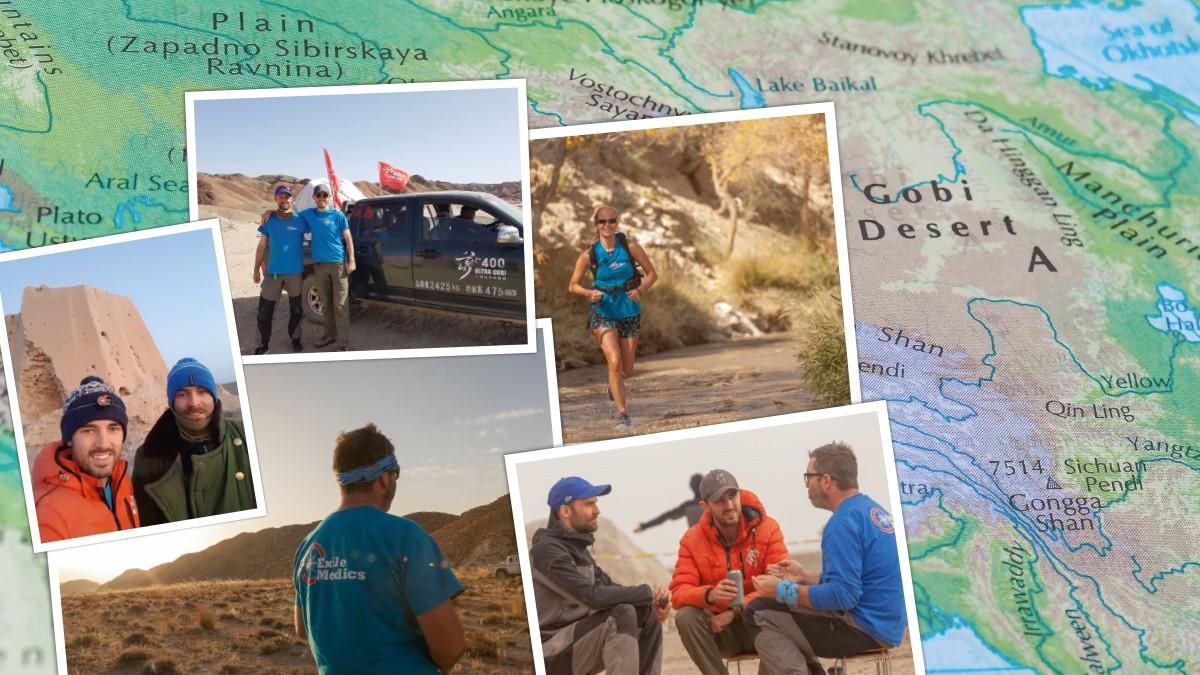 A light blinked on the horizon – dot-dot-dash-dot – stirring memories of learning Morse code at scout camp in Devon. But I was a long way from England and these lights were inching across what is known as the ‘wind storage room’ of north-west China – the Gobi desert. As if to emphasise the point, the tarpaulin billowed under another dusty gust.
Our medical tent was pitched in the relative shelter of a beacon tower in the ancient city of Tuhulu and the blinking light belonged to a runner in the Ultra Gobi race. This 400k non-stop race over desert, mountains and dried riverbeds must be completed within 149 hours in ferocious winds.
Over five days, 28 September to 4 October, an 11-strong team from the UK-based Exile Medics, which provides medical care for extreme events all over the planet, were there to support the super-human efforts of the athletes. There were checkpoints dotted along the historic Silk Road, complete with logistics, race officials, press, interpreters and Chinese medical staff. Periodically, the whole circus would load itself into convoy and move on to yet another breath-taking location.
The challenges of operating in China are considerable. Aside from gaining initial access to work in the region, the team had anticipated cultural and communication barriers to conspire with the alien, inhospitable landscape. Keeping a clinical workspace clean of dust for more than a few minutes was difficult and as the race leader crashed into the medical tent that night, the press cameras snapped, assistants rushed to fetch food and water and officials presented gifts to runners: unusual stones, chocolates and mooncake, a traditional treat at this time of year. All that activity encroached upon our clinical headspace and sometimes made it physically difficult to move around the runners, let alone assess them methodically.

As sole physiotherapist in the British team, I worked alongside Sam Westall, a medical registrar from Liverpool. He displayed great humour and resolute patience, helpful when it came to prescribing medicines to exhausted athletes across multiple dialects. If there were several runners in the medical tent, we would try to match our skills to individual clinical need but, invariably, they all needed their feet checked and re-dressed. Sometimes large blisters had to be aspirated or antibiotics prescribed for those that had already popped and become suspect.
The smell in the crowded tent could be distinctly off but the runners were insightful about their bodies and interesting people who mostly all smiled throughout. I soon overcame my Englishness and returned athletes’ hugs with equal gusto when they left to rejoin the race.
We were very lucky at our checkpoints to work with an excellent Chinese nurse, Sun Yu. Although she didn’t speak English we managed with hand signals or expressions and after a day together understood what each other needed. I learned xiè xie, Mandarin for thank you, and Sun Yu would simply say okay, when she thought the foot care was good enough. Until I got her verbal approval, I tried not to breathe through my nose and kept working.
The harmony was fragile. Inevitably, at times, much like those tired feet rubbing away on the sand, friction arose between the teams. We had imagined there might be conflict between traditional Chinese and western medicine but, paradoxically, it was their strict adherence to the textbook that caused tension. One such difference of opinion involved the application of tape: our Chinese counterparts were rigid in their prescribed application techniques, whereas we preferred a more flexible approach to accommodate the athletes’ preferences. Eventually, the UK team leader, Adam Brown, an emergency consultant from Bristol, was called in to mediate after one checkpoint became particularly confrontational. It was an interesting and slightly amusing insight into the contrasting approaches to ‘evidence-based’ medicine under the duress of sleep deprivation and the odd attack of what our hosts called ‘Chinese bowel’.

Happily, the race concluded without serious incident or injury. One athlete had to be tracked down and rescued from the desert, suffering from exhaustion and hypothermia after going off course at night when the temperature drops. It was a great feeling to greet the athletes on the finishing line and feel as if, in some small way, we had helped them to get there. After it was all over, we rewarded ourselves with fun and sightseeing in Beijing, visiting Tiananmen Square, the Forbidden City and the Great Wall of China before jetting home.
Back in England, I reflected on my first Ultra as a physiotherapist. I had seen acute stress fractures, strapped the worst-looking Achilles tendon I have seen (to my amazement, the doctors 25 miles on had reported it was holding firm, the athlete still going strong), experienced the buzz of working under the media spotlight and hammered along the dirt tracks of the Silk Road in a 4x4.
Most of all, I felt I had added value as a physiotherapist among experienced expedition medics in an austere environment when I hadn’t been sure I’d be able to do that.  So my advice would be this: worm your way in, get the gig first and find out what you can contribute later. You might be surprised where this old physio lark can take you. fl
Ben Watkins is a physiotherapist in Exeter and director of My Therapy Network