A CSP film on rehabilitation has won praise from critics and campaigners alike, as Mark Gould discovered. 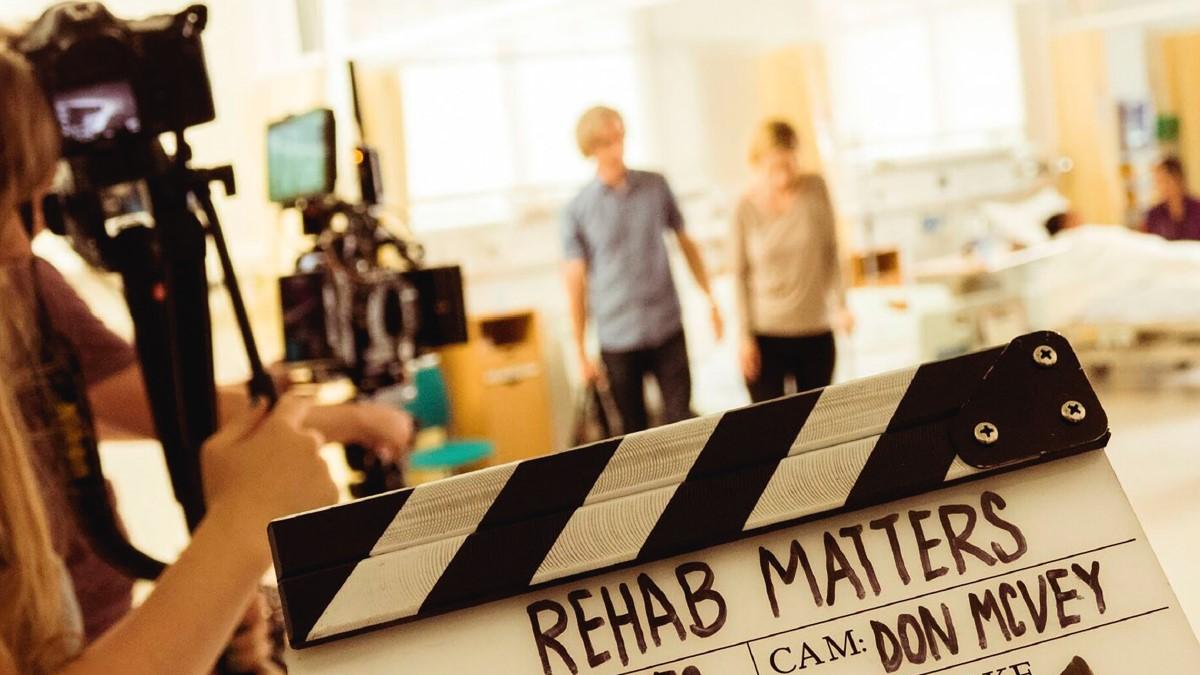 If the film director Ken Loach wanted to cast a naturalistic actor for a film about the NHS he need look no further than Charlotte Wilce, a senior physiotherapist at Guy’s and St Thomas’ Hospital in London. Miss Wilce, 31, is one of the stars of Rehab Matters – a short film commissioned by the CSP to highlight the importance of more funding and resources for community rehabilitation. The film also features a brief performance by another physio, Rohima Begum, a former CSP professional adviser who is based in Northern Ireland.
In a nod to the Sliding Doors style of ‘what if?’ drama, it compares and contrasts the different outcomes in the life of a woman who is discharged from hospital after a stroke. Although only five-minutes long, the film, made by the Oscar-shortlisted British director Chris Jones, is compelling and packs a poignant punch. The story contrasts the positive experience and expectations of the woman’s return to mobility through rehabilitation with a community physiotherapist, with the very different outcome experienced by her distressed, disabled alter ego who misses out.
Times columnist Melanie Reid described it as ‘brief, moving and brutally effective, it’s about us. You, me, our future. Do we want independence and quality of life? Or the alternative?’

Iona Price joined the CSP campaign to raise the profile of community rehabilitation after her mother died following  a lengthy and frustrating battle to get appropriate physio rehab. Her response to Rehab Matters? ‘I think the film illustrates the problem perfectly.’
Miss Wilce, had already been unwillingly thrust into the media spotlight as a consequence of the terror attacks last March on Westminster Bridge and the Palace of Westminster, which are a five-minute walk from St Thomas’. ‘I was one of the first responders with colleagues from St Thomas’ and was featured in Frontline when we met Prince William. A bit later on, someone from the CSP contacted me to say that they were planning to make a film highlighting the importance of rehab and would I agree to do a bit of filming,’ she said.
Miss Wilce hadn’t acted before. ‘I did drama lessons at school but never any acting. I wasn’t even in the school panto.’ She did not know what to expect when filming started one Sunday in July but at least the surroundings were familiar. ‘The film was shot in the simulation centre at St Thomas’ where staff are trained. It was converted to look like a real hospital ward, as Chris Jones wanted it to look as authentic as possible. I didn’t really know what sort of film was being made but I didn’t expect an Oscar-shortlisted director and a full crew with cameras, sound, lighting and makeup. ‘Chris just told me to be as natural as possible. He gave me free rein to do what I would normally do and to tell them how things should be – they wanted it to look authentic.’
Miss Wilce said she was impressed by the actors’ and crew’s professionalism. The film follows the rehabilitation of a middle-aged woman, played by actor Vanessa Bailey, after a stroke. ‘Vanessa’s mother had died a couple of years earlier, following a stroke, so the emotions were pretty raw and real for her,’ Miss Wilce said. ‘She told me she wanted to be as authentic as possible and took advice about how to carry herself after a stroke, and how that would change as she had more rehab. The make-up people were also excellent and gave her the appearance of someone who had recently had a serious illness – it looked really impressive in the flesh.’

The film had nearly more than 200,000 views on Facebook within a month of being launched. Miss Wilce said: ‘There has been a bit of banter about me wanting a red carpet on the wards, but all in good fun. Colleagues are really encouraging and have been sharing the film on social media, as have my friends and family. Everyone knows someone who has had or needed physio – after a hip operation, sports injury or stroke – so they can relate to the story. Some of my colleagues were at the Physiotherapy UK event in November where the film was shown on a big screen. Everyone says I look completely natural but it was a bit daunting on the set when I realised how much was going into the production. Chris let me act as normal and do some long takes but I felt that they managed to get the sense of lengthy physio sessions even though he had to compress and cut them into five minutes of film.’
Director Chris Jones was also full of praise for the physios, who were cast after initial attempts with actors did not work. ‘The choice to use a real physio over an actor was a no brainer. Actors are wonderful at conveying emotional shorthand to deliver the meaning in a scene, but unless they are an expert or have been trained, it usually shows the moment they need to do something like play a musical instrument, perform gymnastics or indeed, perform physiotherapy – especially when the audience would contain many experts in this field.
‘I was blessed to work with expert physios, Charlotte and Rohima, who both took to acting immediately. We did overshoot scenes knowing we could cut it down in the edit, but what they were doing had, first and foremost, to be authentic.’
Miss Wilce hopes Rehab Matters will raise the profile of rehabilitation and help to improve funding. ‘Rehab really does make a difference – it gives people their freedom and independence back. And it saves money and beds for the NHS in the long run. fl