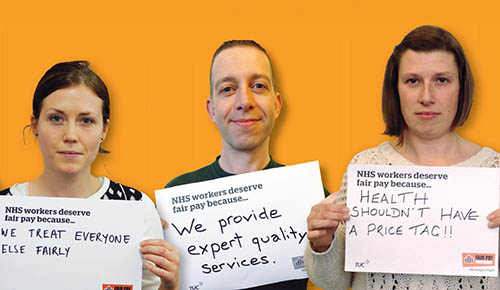 Last month, in a blow to hard-pressed physiotherapy and other NHS staff, the Westminster government rejected the pay review body (PRB) recommendations on this year’s pay rise.

The independent organisation had recommended a one per cent increase for all four UK countries and for all staff.

But the government in England has announced that only staff at the top of their pay band will receive this rise. They will receive a one per cent non-consolidated payment in 2014 to 2015.

Other staff – those not at the top of the pay band – will only receive their banding increment, not a one per cent cost of living increase.

The government in England also stated that it intends to apply the same approach to pay for 2015 to 2016.

This will mean that NHS physiotherapy staff in England will get a further one per cent non-consolidated payment if they have reached the top of their grade, while the rest will only get their banding increment. They will not get both.

The government in England has also suggested that if the unions were to agree a complete freeze on banding increments in 2015 to 2016 they might reconsider the position and make the one per cent increase consolidated.

The government in Scotland, meanwhile, has agreed to implement the PRB recommendations in full.

In Wales the health minister has said he wants to follow a similar approach to England, but is willing to talk to the unions about the possibility of distributing the award in a different way. In Northern Ireland the picture is unclear.

The CSP says the Westminster offer is unacceptable and shows ‘complete contempt’ for CSP members who have suffered a dramatic fall in the real value of their incomes since the pay freeze was implemented in the NHS in April 2011.

Does the government pay policy address the impact of living cost rises facing CSP members?
No. Inflation as measured by the wider retail price index is currently at 2.7 per cent and has been running ahead of earnings for years.

The real value of the wages of CSP members in the NHS has been falling dramatically since the pay freeze was implemented in April 2011.

And inflation was outstripping pay rises even before then. A CSP survey conducted during last summer 2013 found that 82 per cent of members felt that their pay levels relative to the cost of living had left them worse off during the previous 12 months, while 77 per cent felt their household finances had deteriorated.

What does non-consolidated mean?
It means it is a one-off payment which isn’t added to the pay scales.

It also means it doesn’t count towards your pension.

A consolidated payment is built into your salary and is included as part of your current salary when the next year’s increase is calculated. If you are awarded a non-consolidated pay increase for one year, once that year is complete your pay will revert back to the sum before the non-consolidated rise was introduced.

So how will the two-year award work?
A one per cent non-consolidated payment will apply to basic pay for staff at the top of their pay bands.

Would the PRB-recommended one per cent increase across the board threaten jobs?
Jobs are already being lost.

The government has provided no evidence to support its assertion that by implementing the PRB recommendations jobs would be lost. Nor has it indicated any willingness to guarantee that there will be no job losses if unions accept its proposals.

The UK government should ensure that it can resource a safe and high quality health service. Safe staffing levels and the use of better paid higher skilled staff are complementary initiatives to raise the quality of patient care. The CSP believes better trained and motivated staff deliver better care.

Are NHS and other public sector staff overpaid compared with private sector?
No. It is impossible to average out the two sectors because there are five times more workers who are unskilled in the private than the state sector.

The state sector is far more highly skilled: Office for National Statistics figures show only 8.6 per cent of people in the private sector are in professional grades, against nearly a quarter in the public sector.

But surely the chancellor is right – haven’t we got to help cut the deficit?
It is important to bear in mind the billions of pounds the government is prepared to spend on implementing the Health and Social Care Act in England.

Or the hundreds of millions that could be saved by investing in services like physiotherapy. And that the coalition government has choices about the timetable for bringing the public deficit down and therefore the scale of the cuts to public services.

It can also raise more revenue – up to £20 billion – through a financial transactions tax. In the end, the question is this: how much does the government value the work of physiotherapy and other staff in the NHS?

What is the CSP doing and how can I have my say?
We are working closely with other trade unions and want to hear from you on your views about the pay award and if you would be prepared to join in any joint action.

You can attend NHS workplace meetings organised by your CSP steward this month, or otherwise let your steward know your views.

Please keep your membership profile up-to-date for any possible future consultation by email, or a ballot over this issue.

What can I do to support the campaign on fair pay for NHS and other workers?
You could get involved in wider campaigning, coordinated by the TUC and which the CSP supports as an affiliated member.

The TUC argues that, as part of a sustainable economic recovery, ‘Britain Needs a Pay Rise’.

It is calling for fair pay for all public and private sector workers, including physios working outside the NHS. fl  For more information, see: www.tuc.org.uk and www.csp.org.uk/pay

What the Pay Review Body said on ...

... pay freeze
‘The Department of Health and the Scottish Government told us that funding was being made available to employers to cover a one per cent rise this year, and we hold to our view that it is neither desirable nor sustainable to substitute a pay freeze for productivity and transformational reforms.’

‘We do not consider incremental pay to be costly, in net terms, because when new staff are recruited to the bottom of the scale, replacing, in general, staff at the top point ... the operation of the system is ineffective in rewarding performance because of widespread inadequacies in the appraisal and performance management system. We think there is a pressing need to manage and apply [England’s 2013] agreed pay progression arrangements properly ...’

‘We continue to recognise the joint staff sides argument on the effect of inflation in reducing real wages ... we need to ensure that the NHS remains a competitive employer and is ready to respond quickly to ensure continued recruitment and retention of the quality of staff needed to deliver both quality of care to patients and the major changes required across the NHS.’

‘We recognise the connection between quality patient care and the morale and motivation of the staff delivering that care.

Our conclusion was that government statements have led staff to expect a pay settlement this year of around one per cent.

If these expectations were to be dashed, patients would be impacted by declining staff morale and engagement.’

The Independent PRB makes recommendations on pay awards for NHS staff across the UK.

Its 28th report, for 2014, is available at https://www.gov.uk/government/publications/nhs-pay-review-body-28th-report-2014